Against No. 20 Carnegie Mellon on Friday night, the No. 9 Bears started out fast offensively. Junior Natalie Orr caught fire from beyond the arc, shooting 3-5 from distance in the first quarter. The Tartans, however, kept up through the beginning, led by Carnegie Mellon senior center Lisa Murphy. Murphy, who entered the weekend averaging a Division III-best 25.7 per game, supplied nine of her team’s 19 points through the first 10 minutes. 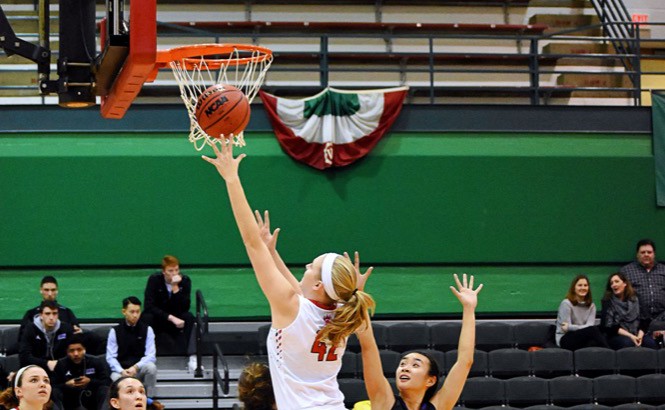 The lead changed four times within a two-minute span early in the first, with both teams matching each other shot for shot. At the end of the exchange, a catch-and-shoot three from the right wing by sophomore Rachel Sondag put the Bears up 13-11, and from there, the Bears didn’t look back.

Orr kicked off the second quarter the same way she did the first, drilling a three to put the Bears up 25-19. From there, Wash. U.’s bigs led the way with strong play inside on the offensive boards. The Bears grabbed five offensive rebounds in the quarter, with senior Lily Sarros, senior Jenn Dynis and sophomore Madeline Homoly all converting missed shots into made baskets. Overall, Wash. U. outscored Carnegie Mellon 23-8 in the second period, with Dynis putting the Bears up by 18 before the half with a finger roll.

In the second half, the Tartans found their footing, but an opportunistic defense prevented a major comeback. Sophomore guard Becca Clark-Callender recorded a steal and a career-high two blocks. The second of these came in dramatic fashion. After a three from Carnegie Mellon cut the Bears’ lead to just 10, Clark-Callender turned the ball over at midcourt. As the Tartans rushed down the open floor for a fast break layup, Clark-Callender tracked her path to the basket, and timed her leap perfectly for a clean chase down block.

10 points was as close to Wash. U. as the Tartans would get for the rest of the game, as the Bears completed a season sweep of their University Athletic Assocation (UAA) rivals. Orr led the team with 19 points, with Homoly contributing 17 off the bench and sophomore Stephanie Botkin also scoring in the double figures with 10. Wash. U. outrebounded Carnegie Mellon 39-29.

On Sunday, the Bears completed a much more comfortable victory against Case Western. The Bears continued to rebound the ball well, and senior forward Zoe Vernon got the game started by crashing the boards and converting off her own miss. Two possessions later, Vernon caught the ball on the right wing and pulled up for a three from the wing, giving Wash. U. an early 7-2 lead.

Once again, it was the second quarter in which the Bears pulled away. This time, the Bears relied on solid ball movement to break down the Spartans’ zone. For the Bears’ first bucket of the quarter, Vernon found Orr for a catch-and-shoot three in the left corner. Orr’s shot put the Bears up 24-18.

The Bears continued to rack up the assists in the quarter. After working the ball around the perimeter, Dynis found Botkin inside for a short jumper that put the Bears up 12. Clark-Callender once again provided playmaking off the bench, finding Homoly near the basket with a threaded pass inside. The Bears piled up nine assists in the quarter, and a Vernon layup with three seconds left pushed the halftime score to 47-30.

The Red and Green continued to push their lead into the second half. A major part of this was the defensive side of the ball. Though junior forward Kara Hageman, the Spartans’ top threat, scored 25, Case Western’s other two top scorers, senior guard Jess McCoy and sophomore guard Hillary Hellman, were held to seven and four points, respectively. Only one Spartans player besides Hageman scored in the double digits, while the whole team shot just 39.7 percent from the field.

In the end, Wash. U. managed a comfortable 29-point victory. The Bears’ 26 team assists match a season high, and five players scored ten or more points, led by Homoly with 24.

The two wins this weekend improve the Bears’ record to 7-2 in the UAA, putting them in a dead heat with University of Chicago. The Maroons currently have the head-to-head tiebreaker. Wash. U. will be at home again next weekend and will host games against Emory University and the University of Rochester.