The No. 11 Washington University women’s basketball team secured two road wins over conference opponents this weekend. First, a highly contested 78-72 win at No. 9 Carnegie Mellon University on Friday. Then, a 92-79 victory over host Case Western Reserve University on Sunday afternoon.

Carnegie entered the matchup in the top spot in the conference, with a 4-1 record in the University Athletic Association (UAA). The Bears trailed a game behind, at 3-2. Much of the Tartans’ success through the first half of the season was predicated on an efficient 45.5 shooting percentage, the eighth-best mark in Division III. 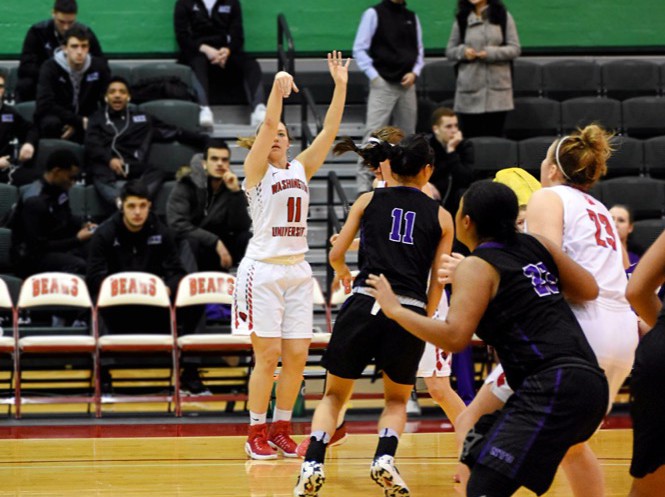 “We really focused on our defensive game plan going into the Carnegie game,” said junior Natalie Orr. “They have some very skilled players [who] require a lot of our attention on defense, so we had to trust and execute our defensive scheme from the start of the game. Coach encouraged us to ‘play fearlessly.’ In this game, everyone knew it was a huge game for both teams, but she also wanted us to remember to relax, play loose and have fun because that’s really when we play at our highest level.”

Anchored by senior forward Jenn Dynis and sophomore Madeline Homoly, the Bears built a nine-point lead with seven minutes to go in the second quarter, but the Tartans continued to fight back. Led by senior center Lisa Murphy, who averaged a Division III-best 25.9 points per game heading into the matchup, the Tartans chipped away at Wash. U.’s lead, narrowing the margin to a 33-29 Bears at the half.

Given time to regroup at halftime, Carnegie Mellon came out swinging, evening the score with two big three pointers four minutes into the quarter. A layup by Murphy gave the Tartans their first lead since the start of the game. The lead then bounced back and forth 10 times during a hotly contested third quarter. Murphy, who finished with a game-high 32 points, had 13 of the Tartans’ 26 points in the third.

Sophomore guard Becca Clark-Callender’s last second shot made things even at 55 heading into the final quarter.

The Bears and Tartans continued to trade leads well into the fourth, until a layup by senior Lily Sarros with four minutes left in regulation sparked a 6-0 Wash. U. run.

Orr made all four of her free throw shots in the final 30 seconds to secure the win for the Bears, as Carnegie Mellon tried to foul to gain possession. The Tartans nailed a buzzer beating jumper to give Wash. U. their final six-point margin against on of Division III’s best offenses.

“I think our constant defensive full court pressure wore them down throughout the game, and we were able to take advantage of that in the fourth quarter,” Orr said.

Carnegie Mellon did shoot 7-16 from the field in the final 10 minutes, but more importantly, the Tartans missed all four of their three point attempts as they tried to close the gap.

“I think it came down to getting some stops at the right time and executing our offense when we needed to,” senior forward Zoe Vernon said.

Four Bears reached double figures in the contest: Homoly with 18, Orr with 16 and Dynis and Vernon finishing with 13 apiece. Orr also secured her first career double-double, bringing in 10 rebounds and adding five assists to lead the team.

Following a season trend, the Wash. U. bench was vital to their victory, outscoring the Carnegie Mellon substitutes 29-9.

On Sunday, the Bears had another tough matchup at Case Western Reserve University, but Wash. U. was again able to come away with the win due to their dominant play in the fourth quarter, including a 17-4 run that secured the victory. They were led by Homoly’s career-afternoon; she scored a career-high 33 points along with 11 rebounds.

Two consecutive layups by Homoly, both made after steals by Clark-Callender and sophomore Rachael Sondag, put Wash. U. up 31-28 three minutes into the third.

Case Western continued to keep pace with the Bears throughout the game, with the Red and Green nursing only a 62-57 lead going into the final quarter.

Case Western continued to chip away, shrinking the Bears’ lead to just one possession with seven minutes left the play. But the Red and Green quickly responded with a flurry of three pointers from Sondag and Orr that gave the Bears enough cushion for the win.

Wash. U.’s bench, anchored by Homoly, led the way this weekend, outscoring Case Western with a stunning 53-2 advantage and an 82-11 advantage overall against both opponents this weekend.

After these two conference wins, the Bears are in a three-way tie for first place, sharing a 5-2 record with the University of Rochester and University of Chicago.

The Bears play Carnegie Mellon and Case Western again next weekend when both teams take trips to St. Louis.