After trailing by three points at halftime, the Washington University women’s basketball team exploded for 26 points in the third quarter en route to a 59-38 victory over No. 7 University of Rochester on Friday night at the Field House.

“We got into some early foul trouble with three of our starters having to come out, but our bench played well and kept us in the game,” head coach Nancy Fahey said. “When we finally got our starters back in the game, they were well rested with fresh legs and brought a lot of energy. I would like to say it was me, but I have to give all the credit to the players for their tremendous effort.” 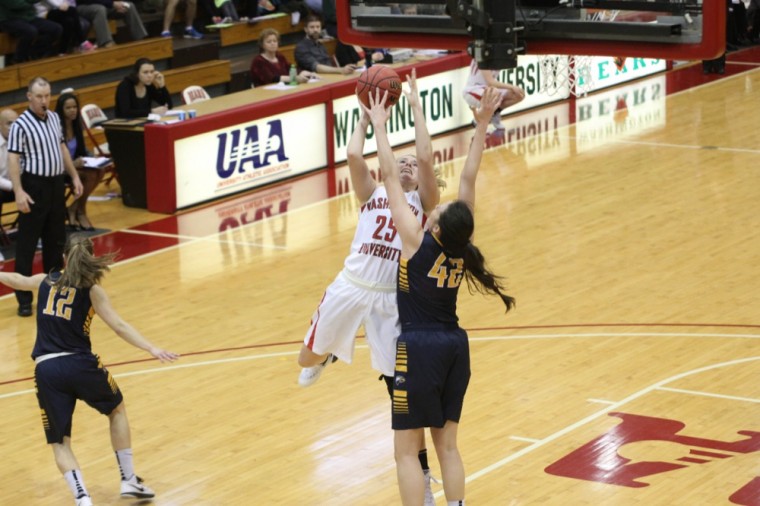 Junior Lily Sarros goes up for a shot during Sunday’s game against Emory. The Bears came out with a 75-68 victory.

In the first half, Wash. U. jumped out to an early 11-0 lead and forced six turnovers to start the game. But a Rochester timeout cooled the Bears offense, and the Yellowjackets were able to close the gap. Rochester entered the locker room at the half with a 24-21 lead after scoring the final six points of the second quarter.

“We just did not play with enough intensity and focus,” senior forward Amanda Martinez said. “We got off to a great start, but then we got too complacent and allowed them to push us around and dictate the game.”

The Bears received a lucky break at the start of the third quarter when Rochester mismanaged the inbound pass, giving the Bears the opening possession. That small nudge appeared to ignite the Bears’ offense as they shot 68.4 percent from the field over the next 10 minutes. Martinez paced the Red and Green in the quarter with 12 points and three steals. She would go on to lead all scorers with 17 points to go along with eight rebounds and five steals in 24 minutes.

“It felt great to go out there and put up a strong performance,” Martinez said. “But I have to credit my teammates for giving me the opportunities to get those points. This was an awesome team effort, and an exciting win over a tough opponent.”

Junior forward Lily Sarros chipped in 15 points and 10 rebounds as the Bears took control of the interior, outscoring the Yellowjackets 32-18 in the paint.

“I think our point of emphasis this week in practice was getting touches in the post,” Fahey said. “We feel very confident that when we do that; it helps balance our offense. So, we focused on adjustments like that, and it paid off.”

While the interior offense was clicking, the stifling defense also helped widen the gap. Wash. U. held Rochester to only one three-pointer on 10 attempts the entire game, even though the Yellowjackets entered the game leading the University Athletic Association in three-point shooting percentage. Friday’s loss in St. Louis was the first time since 2005 that Rochester had been held below 40 points in a game.

Although both teams did not shoot particularly well from the perimeter, sophomore guard Natalie Orr knocked in an early three-pointer to spark the Red and Green’s early run. Orr finished with five points and three rebounds in her first start of her career. Recently, Orr had been playing well coming off the bench, averaging nearly 13 points in her last seven games.

“Throughout the season, we want to give different players some different perspectives,” Fahey said about the decision to include Orr in the starting lineup. “Sometimes it helps to shuffle the lineup for positive reasons. It was not a reaction to the loss last week, [against New York University], but the move helped to give us a different landscape.”

On Sunday afternoon, the Bears fought off conference foe Emory University for a 75-68 victory at the Field House. After a quiet first career start, Orr led all scorers with 21 points on 8-13 shooting, but, despite her performance, the Eagles led 39-34 at halftime. But Martinez recorded 10 of her 17 points in the third quarter to put the Red and Green back on top and give the Bears the cushion they needed to ride out the win.

The Bears and Eagles tallied nearly identical field goal statistics, so the real key to the victory came at the free-throw line—the Bears visited the charity stripe 38 times. Though Wash. U. shot only 65.8 percent from the line for 25 points, Emory only attempted eight free throws the entire game.

The Bears, with an overall record of 14-3, are currently ranked tenth in the nation, and will likely move up in the national rankings with the 21-point win over No. 7 Rochester. Aside from the Bears, Rochester and New York University are the two other schools from the UAA in the national top 10. After this weekend, NYU and Wash. U. sit atop the UAA conference record, with each 6-1, while Rochester is close behind at 5-2.

“We know the UAA is tough and filled with a lot of good teams,” Martinez said. “Every game will definitely be a challenge, but the positive is that it forces us to focus every game and every practice. There are no easy roll-over games in the conference, and so we have to play our best each and every game.”

More photos from this game available for purchase at studlife.smugmug.com/sports.