They’ve lost just two home games since becoming full-time starters, they’ve lived together for two years and now a trio of seniors has added two conference titles to its friendship.

Seniors Melissa Gilkey, Alyssa Johanson and Maddy Scheppers each tallied 14 points on Saturday, and the Washington University’s women’s basketball team survived a scare from the University of Chicago, 63-56, on Senior Day to tie the Maroons at the top of the University Athletic Association standings. 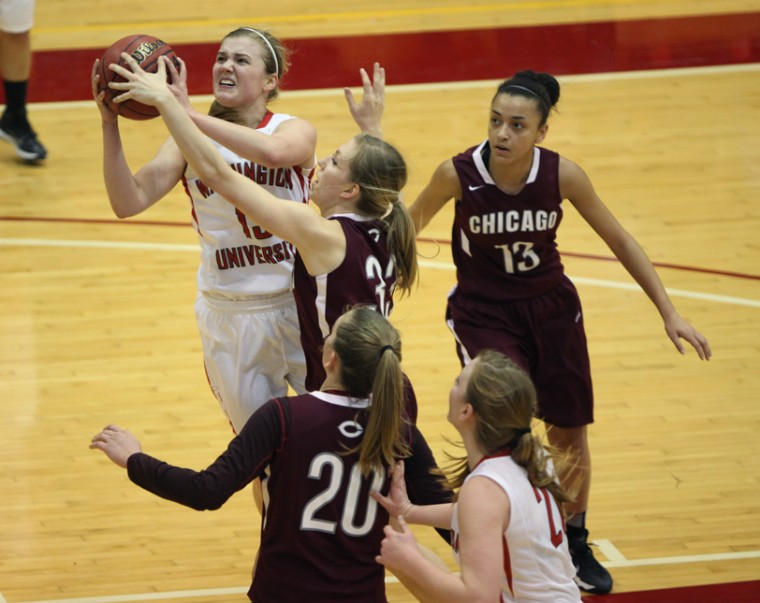 Because the Bears swept their season series with UChicago, Wash. U. adds the conference’s automatic bid to the NCAA Division III tournament to its winning total from Saturday, which also included the team’s second consecutive and 21st overall UAA title.

“They’re two of the best friends I’ve ever had, so…to be able to share this with them and the rest of my teammates and be on the court with them in a moment like this, it’s a moment I’ll never forget,” Gilkey said.

A low-scoring first half belonged to Scheppers, who entered halftime as the game’s leading scorer with nine points. Despite a shooting slump, she sank two key three-pointers and added an and-one layup to stem UChicago runs.

“Our goal is to take an open shot because [the defenders] help so much on the other side. And it was just, take your shots when you were open and it didn’t matter if it went in or not because we knew we had rebounders,” Scheppers said.

The Bears led 29-26 at halftime and never trailed in the second half, but UChicago forced three ties and kept the score close. But Johanson (10 points) and Gilkey (eight) provided the scoring punch necessary for Wash. U. to stave off the Maroons each time, and junior Jordan Thompson made four free throws in the final minute to seal the game and the Bears’ conference title. 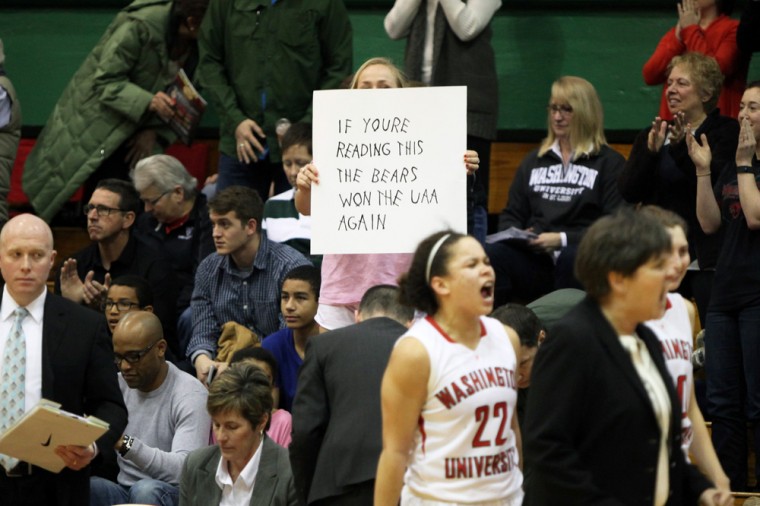 Gilkey, Scheppers and Johanson have ranked as the Bears’ top three scorers for the last three years, and they accounted for a full two-thirds of the team’s points on Saturday. With her 14 points, Gilkey also moved into second place on Wash. U.’s all-time scoring leaderboard.

Despite a fast pace, the game was mostly a sloppy affair, with the teams combining for 40 turnovers and neither squad shooting better than 40 percent. The Bears made 18 of 25 free throws, compared to just 8 of 16 for the Maroons, to gain the advantage on the scoreboard.

The largest lead for either team was just the winning margin of seven, and Johanson said that the close score throughout heightened the importance of turnovers.

“You knew that a turnover is so much more costly in that kind of game because that’s a flip-over of four to six points on either end if you turn the ball over and they score,” she said.

“That’s what we’re looking for, and that’s been our anchor,” Fahey said of the team forcing 22 turnovers. “We feel like that’s what can move you and advance you [in the postseason].”

A pregame ceremony before the game honored the team’s six seniors: Gilkey, Johanson, Scheppers, Alexandra Keane, Lexi Mort and Steph Vukotic. In their Wash. U. careers, the seniors have amassed a 90-17 overall record to go along with their two conference titles.

As part of the ceremony, Fahey hugged each senior and presented her with a basketball signed by the team, and she came away from each successive meeting progressively more emotional and teary-eyed.

“You know these players since their senior years in high school, and you develop relationships and friendships beyond the basketball court, let alone what these six seniors have done for this program. The emotion was real,” Fahey said.

The Bears’ next play is to watch Monday’s NCAA Division III tournament selection show to find out whom and where they will play in next weekend’s first two rounds. With that next step in mind, Saturday’s close game proved to be of twofold importance for Wash. U.

In winning the automatic NCAA bid, the Bears may have also assured themselves of opening the tournament at home in the Field House, where they went undefeated this year and have tallied a 34-2 record over the last three seasons. And playing in their first close contest in more than a month—the last Wash. U. game to finish with a single-digit margin was in January—gave the Bears a taste of the tournament.

“You know that you’re going to have that experience going into the tournament, and the competition is only going to go up from here, so having that close game under our belt was really beneficial to us,” Johanson said.

Fahey was more blunt in her assessment of how the experience will help the team come tournament time.

“This was a tournament atmosphere. It was great to have the crowd here, people supporting. It changed the game—I think the crowd was a huge impact, so I thank all the students that came, and hopefully if we advance, we’ll have them again,” Fahey said.