Entering its weekend matchup against Loras College, the Washington University women’s basketball team had dominated its opponents, winning all of their five games by 23 or more points. Saturday’s afternoon contest proved no different as the No. 5 Bears easily handled the Duhawks in a 78-51 rout at the Field House.

Unlike last week’s game against Illinois Wesleyan University, which forced the Red and Green to battle back from a first-half deficit, Wash. U. jumped out to a 40-21 halftime lead against Loras, though a scrappy Duhawks team was initially able to keep the game close at 17-13 after a string of turnovers and fouls from the Bears. 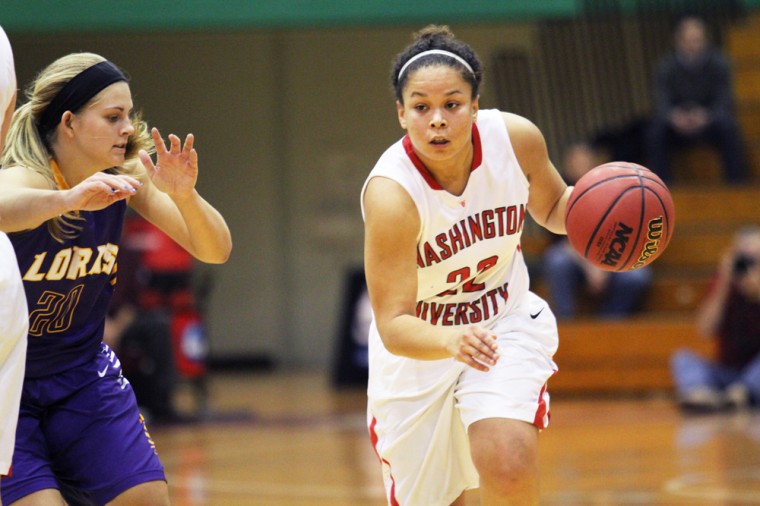 Jordan Thompson dribbles the ball down the court in the Bears’ 78-51 win over Loras College. Thompson led the team with five assists.

But a fast-paced Bears offense allowed the home team to open up a bigger lead.

“We knew that they play a great defensive system,” head coach Nancy Fahey said. “So I really felt that it was our tempo that helped us a lot, just keeping the game loose up and down. I didn’t really want to get into a half-court brawl with them because they are so solid.”

With under 10 minutes left in the first half, a layup by senior forward Melissa Gilkey sparked a 10-0 run for the Bears. After the Duhawks trimmed the deficit to 31-21, the Bears went on another run with nine unanswered points to finish off the half.

The Red and Green went into the locker room with a robust lead even with Gilkey, the team’s leading scorer, shooting only 1 of 6 from the field. Wash. U. used a tenacious defensive effort to force a whopping 17 turnovers in the first half.

In the second half, Gilkey found her rhythm, scoring 20 points on an 81.8 field-goal percentage. Gilkey recovered from her slow start to finish the game with 24 points, for the second consecutive game, along with seven rebounds. Gilkey deflected credit to her teammates for her improved shooting percentage in the second half.

Despite Gilkey’s hot shooting, the Duhawks were able to keep pace and narrowly trimmed the deficit to 16 points, which didn’t surprise Fahey.

“I know Loras, I know their program, and I know their coach and there was no doubt they were going to come back with fire,” Fahey said. “Two of their top players were in foul trouble so they were coming back. I figured that was going to be a big punch so by no means were we thinking that it wasn’t going to be a battle for 40.”

However, in what has become a common theme this year, the Wash. U. bench took control at the end of the game to extend the lead with the contest well in hand. Senior center Steph Vukotic provided six points and six boards off the bench while sophomore guard Erika Hunt chipped in with eight points.

Throughout the game, the Bears controlled the paint and outscored the Duhawks 40-18 inside. Wash. U.’s strong interior presence yielded 21 offensive rebounds, which led to 31 second-chance points. The Red and Green were also able to take advantage of a bevy of turnovers, turning them into 17 points.

The Bears return to action when they travel to Webster University (5-3 record) as they look to improve to 7-0.