Track and field excels in final home meet of season 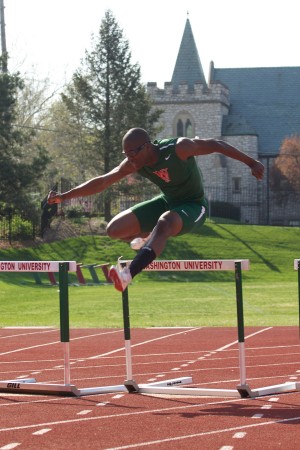 Junior Tyler Jackson competes in the men’s 400-meter hurdles. Jackson finished second in the event on Saturday, with an NCAA provisional qualifying time of 14.61 seconds, as the men’s team took second in the meet.

“We wait all early season for a day like this,” junior Dan Davis said. “It hits 80 degrees and the distance runners start complaining and the sprinters get real happy and you see times start dropping real quick.”

The Bears competed in their third straight and final home meet of the year on Saturday, taking on four other schools. The women’s team won the meet, finishing 24 points ahead of second-place Wartburg College, while the men’s team placed second, 38 points behind Central College.

“We had a great meet. We rocked the house, up and down the line. That’s just how it is. So many [great] performances,” said head coach Jeff Stiles.

The first track event of the day, the 110-meter hurdles, set the stage for the men’s side. Davis finished first with an NCAA automatic qualifying time of 14.34 seconds, just .01 seconds short of the school record. Junior Tyler Jackson was right with Davis, as he has been all year, finishing in second at 14.67 seconds, an NCAA provisional qualifying time.

“Originally I wasn’t planning on running the high hurdles here today, but we saw the forecast earlier in the week and I just thought I had to get some of that,” Davis said. “So this was kind of the best I could’ve been hoping for.”

Along with Davis’ win and Jackson’s victory in the 400-meter hurdles at 57.50 seconds, event winners on the men’s side included junior Justin Pieper’s 1.83 meters in the high jump and freshman Justin Rodriguez’s 9:08.29 in the 3,000-meter run. The men’s side also saw improvements in both the 4×100 meter and the 4×400 meter relays.

The women’s side featured five event winners and strong performances from not only the sprinters, but the distance runners as well. Senior Taryn Surtees’ 1,500-meter time of 4:48.05 was good for first place, as was junior Molly Wawrzyniak’s 11:33.76 in the 3,000-meter steeplechase and freshman Gabby Reuveni’s 11:25.69 in the 3,000-meter run.

Surtees noted that this meet featured several distance runners in events that they would not typically run in, and that the weather took some pressure off of them to have their best performances.

“It was the first time I’d run the 1,500 since freshman year,” Surtees said of her run. “It was fun to try an event that I don’t generally run that often….I kind of just followed the pack and then at the end realized I could kick a little bit, which is always the way you want to race instead of going out too hard and dying. So I was satisfied. It was fun.”

Junior Elizabeth Phillips also took the 800-meter run with a time of 2:15.03 and freshman Anna Etherington grabbed another first-place finish with a mark of 3.40 meters in the pole vault.

“We ran against some of the best short sprinters in the nation,” Stiles said. “So she didn’t score a point in the 100 [and 200], but that’ll score big in [University Athletic Association championships]. She did really well.”

The teams will head back on the road next Friday for the Rose-Hulman Institute of Technology Twilight Meet, the team’s final meet before the UAAs. The meet will begin on Friday at 5 p.m. EST.