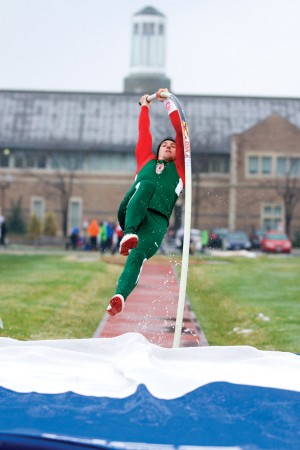 Senior Scott Pettit vaults at the Washington University Mini Meet on Friday. Pettit and teammate Kevin Lind each participated in the event.

The meet was the squad’s first since the NCAA Indoor Championships on March 11-12 and began the transition to running on a 400-meter track versus the 200-meter track used for indoor competitions.

“Everyone was definitely excited to be back outside,” junior Nick Carroll said. “Being able to race at our own track and to be outside on a full 400-meter track was definitely something that we were looking forward to. There’s so many more events, so a lot more people are able to participate.”

While the meet was not officially scored, both the men’s and women’s teams saw the event as a solid gauge of their position to begin the season, despite low temperatures and a light drizzle that lasted throughout the meet.

“It was good to get going,” head coach Jeff Stiles said. “The kids made no excuses, and we had kids that made personal records, the best performances of their lives in some cases.”

The men’s side featured several individual winners. Junior Tyler Jackson picked up where he left off at the end of the winter season, taking both hurdles events with a time of 15.40 seconds in the 110-meter race and 57.34 seconds in the 400-meter race. Senior Scott Pettit and junior Justin Pieper won their respective events as well, with Pettit posting 3.97 meters in the pole vault and Pieper recording 1.85 meters in the high jump. Senior Andrew McClelland took the hammer throw for the Bears with a distance of 43.52 meters.

“I took it out the first couple of laps pretty easy and then tried to fall into a good rhythm and picked up the pace a little bit,” Carroll said of his win. “I ended up with a time only a couple of seconds off of my [personal record] from last year.…It was a good opener.”

Other notable performances for the men included senior Tom Gulyas, who finished second in the 200-meter dash, sophomore Tom Arnold, who took second in the shot put, and senior Alden black and junior Tucker Hartley, who took third and fourth behind Spandorfer in the 1,500-meter run.

On the women’s side, junior Liz Phillips’ 18:28.11 in the 5,000-meter run was one of the team’s four first-place finishes on the day. Junior Erica Jackey followed suit with a winning time of 4:48.02 in the 1,500-meter run. Meanwhile, a pair of freshmen took two more first-place finishes—Jasmine Williams in the high jump (1.62 meters) and Anna Etherington in the pole vault (3.35 meters).

“It was a good first race of the season for me,” Jackey said. “One other girl in the race took it out in a pretty fast pace.…She started to fall off on the last lap, so I just kind of took off on my own.”

“Our freshman class is really strong,” Jackey said. “They bring a lot to the team culture, athletically and socially. They’re a really great, enthusiastic bunch, and it’s nice to see them doing so well.”

The meet was the first of three straight meets for the Bears that will be held at Wash. U. The outdoor season continues with the Washington University Invitational on Friday and Saturday.

The Invitational will begin Friday at 5 p.m.