The Washington University swimming and diving team competed in its last meet of 2016 this weekend, participating in both the Wheaton Invitational in Wheaton, Ill. and the Miami Invitational in Oxford, Ohio.

In Miami, the men’s team finished third in a field of seven teams, while the women came in sixth in a ten-team competition. In Wheaton, both teams captured first place. 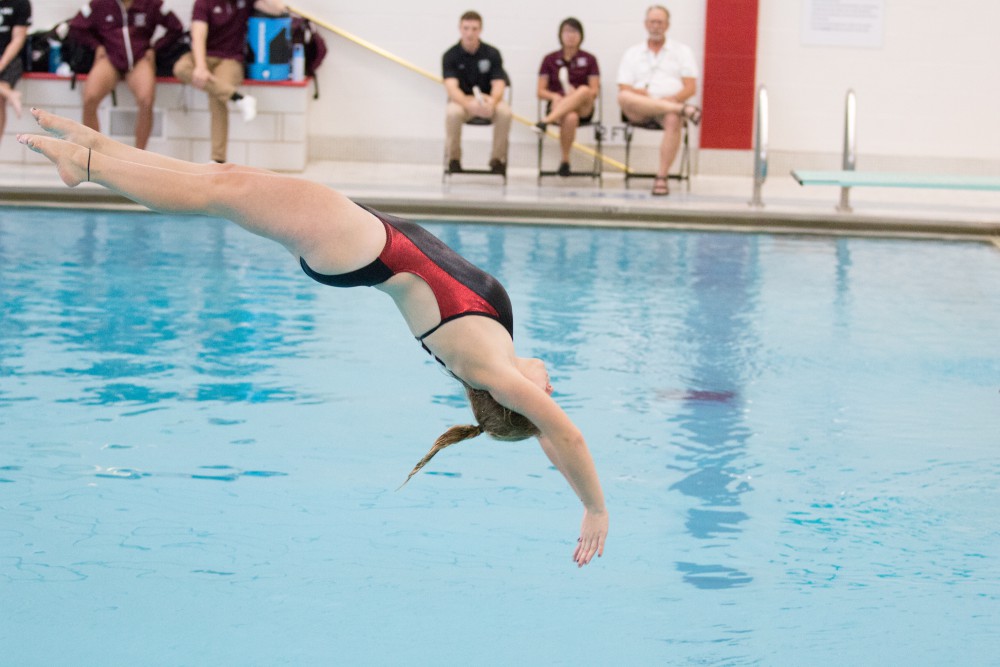 A diver launches into the pool during the Bears’ meet against on Nov. 5. The team finished its season with first place finishes by both the men and women in the Miami Invitational.

“I think everyone really stepped up and took advantage of the opportunities that were in front of them,” head coach Brad Shively said.

Across competitions this weekend, the Bears totaled 45 NCAA B-cut times, which determine eligibility for invitation to the national championships in March.

Perhaps the most impressive performance for the Bears came from freshman Peyton Wilson. Wilson set new school records in the backstroke all three days of competition in Miami. On Thursday, he set a new Wash. U. record in the 100-meter backstroke with a time of 49.84 seconds in the 400 medley, before breaking his own mark the next day by swimming a 49.71-second time. On Saturday, Wilson set a new Bears record with a time of 1:48.86 in the 200-meter backstroke.

Wilson was, however, far from the only successful swimmer for Wash. U. Also in Miami, junior Niamh O’Grady set a new school record in the 200-meter individual medley, with a time of 2:02.73. O’Grady also teamed up with seniors Lauren Carlos and MariMac Collins, along with sophomore Lauren Sapp, to swim a combined 1:34.44 in the 200-meter freestyle relay, a new Red and Green best. Junior Nicole Zanolli also set a new program-best, swimming the 500-meter freestyle in 4:51.95.

Shively said that the amount of new school records set, along with the B-cut times, are testament to his team’s focus and preparation.

“It shows there was a lot of investment and focus in their individual and relay swims and I’m really proud that they maintained their intensity throughout the duration of our meets,” Shively said.

“They really stepped up and took advantage of the opportunities that were in front of them and challenged themselves against some really good competition, and had some tremendous results,” Shively said.

With the major national and conference meets still far away, Shively said that this semester has nonetheless provided important preparation.

“We’re looking to provide opportunities for all our swimmers and divers to compete and see what we could accomplish this first semester,” Shively said. “When we sit down and talk about and look at the results, I think we’ll realize that we’ll have learned a lot from what we did this fall, and then it’s time to get back to work and get ready.”

With competition now finished for the fall season, the Bears will return in the spring, hosting a Quad Meet featuring Quincy College, McKendree College and Lindenwood-Belleville College on Jan. 13.