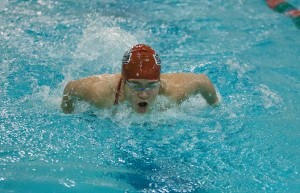 The Washington University men’s and women’s swimming and diving teams split victories this past weekend against DePauw University Saturday, Oct. 29, with the women’s team taking a 168-126 win while the men’s fell 173-120.

“Chi and Meghan have been working really hard and been very focused, and it made a difference in how they swam this weekend,” head coach Brad Shively said. “Chi was able to swim against one of the best breaststrokers in the nation, and it was really good for her to get that experience in.”

“The women’s team swam really well, out touching their opponents and working really hard for each win,” said Pham. 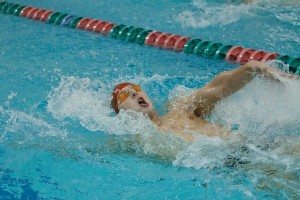 “Jenn swam really well winning the 50 free,” Pham said. “She didn’t swim with us last year, but she came in this year and has stepped up and become a dominant player, being one of our strongest sprinters.”

In the 400-yard freestyle relay, the women’s side picked up a win as Tartavull, Taege, senior Amy Vanlishout and sophomore Paige VanTassell beat out the closest competitors by 5.14 seconds.

“The women brought great effort, and it happened immediately taking the medley relay,” Shively said. “We wanted to start that meet off with a bang, and we kept gaining momentum and taking victories. We can’t rest on it or become complacent, but it was a great step for them to have good swims across the board.”

The men’s side fell short to a much stronger men’s DePauw team comprised of a handful of strong freshman and a few national swimmers.

“The DePauw’s men’s team is much better than their women’s,” Pham said. “Our men’s team is very young, as we lost some strong swimmers last year. The younger guys are stepping up and trying to fill those gaps, and they are doing really well.”

“We had some really great swims and definitely did better than previously,” Shively said. “Our distance guys, backstrokers and flyers did a lot better. It was a really good thing to face strong competition, as we haven’t seen any strong Division III competition yet. It was a good reminder to keep working and get stronger and get better.”

The Bears head to Chicago on Saturday, Nov. 5, to face UAA rival University of Chicago and the Illinois Institute of Technology. With only a week to prepare for one of the stronger teams in the conference, the team is going to work hard this coming week.

“Chicago is going to be our first in-conference meet, and they have a lot of depth,” Pham said. “We need to remember for Chicago that every race counts and focus on beating the person next to you. It will be a good meet; we are very pumped about it.”