In a year that has included milestone victories, individual national championships and multiple playoff appearances, Washington University has had a memorable 2014 sports season. Take a look at our list of the best Wash. U. sports moments of this past year.

Junior goalkeeper Amy French makes one of her six saves in a shutout win over the University of Chicago on Nov. 8. Sophomore forward Katie Chandler scored the game’s only goal in the 48th minute to snap a losing streak and help the Bears earn a playoff berth.

In a must-win conference game against the University of Chicago, sophomore forward Katie Chandler maneuvered past two defenders and scored the game-winning goal. Chandler’s strike from 25 yards out in the 48th minute gave the Bears a 1-0 victory and snapped a two-game losing skid on Nov. 8 at Francis Field. The victory helped the Bears earn a playoff berth, but they ended up falling 1-0 in the first round and finished the season with a 13-4-2 record.

In front of 1,911 raucous fans in the Field House, head coach Mark Edwards secured his 600th career win in 33 seasons at the helm when the Bears thumped the University of Rochester by a score of 77-61 at the Field House on Feb. 7. The Red and Green would finish the season with a 24-3 record and advance to the second round of the NCAA Tournament.

Behind the stout play of then-sophomore Connie Zhou and then-junior Olivia Lugar, the Bears captured the No. 1 ranking in the Women’s Golf Coaches Association Division III Top-25 Poll for the first time in school history on April 2. At the NCAA Championships, the Red and Green nabbed seventh place, good for the second-highest finish in school history.

Senior Drew Padgett returned from an injury that sidelined him at the University Athletic Association Championships to lead the mean’s team to fourth place at the NCAA Division III Cross Country National Championships on Nov. 22. Padgett raced to sixth place with a time of 24:02.4 as the men’s team’s recorded its fourth consecutive top-five finish at nationals.

Looking to advance to the regional finals, the Bears were knotted 14-14 in the fifth set against underdog Hendrix College at the Field House on Nov. 15. After a Hendrix service error, junior Jackie Nelligan and sophomore Amanda Palucki teamed up for a game-winning block to send the Red and Green to the regional finals, where Wash. U. was ousted in five sets by Emory University.

The men’s tennis team clinched its first ever Intercollegiate Tennis Association National Indoor Championship with a 6-3 victory against John Hopkins University on Feb. 23. After placing second in 2009, 2010 and 2011, Wash. U. finally earned its first championship by beating three ranked teams en route to the title. The Bears finished the outdoor season with a 21-3 record and an NCAA Quarterfinal appearance. 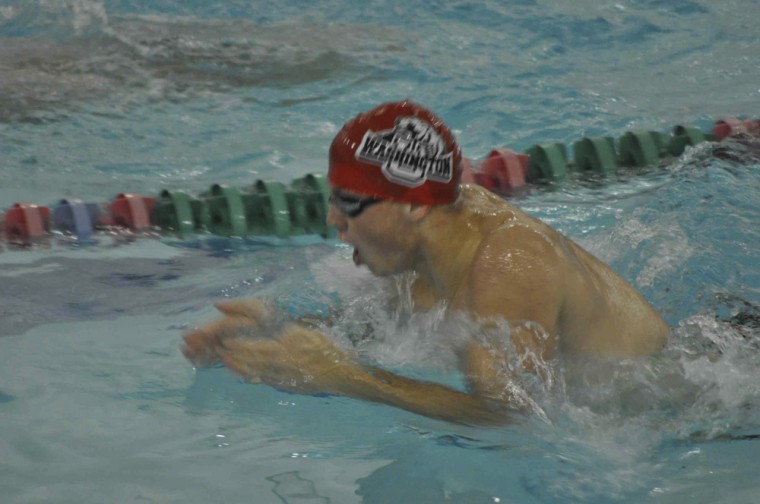 Freshman Michael Lagieski swims the 200-yard breaststroke in a dual meet with DePauw University on Nov. 2, 2013. Lagieski became just the fourth Wash. U. swimmer to win a national title when he set a school record in the 100 breaststroke in March.

Michael Lagieski made quite a splash as a freshman when he became the fourth men’s swimmer in Wash. U. history to win a national championship at the 2014 NCAA Division III Swimming & Diving Championships on March 21. Lagieski placed first in the 100-yard breaststroke with a time of 54.10 seconds, which is a Division III national meet record and a school record.