Facing opponents with a combined 17-47-1 record heading into the weekend, the No. 18 Washington University softball team dominated and earned six victories. On Thursday, the Bears traveled to Greenville College for a pair of 9-0, 6-1 wins. The next day, the Red and Green shut out Principia College at home 11-0 and 8-0. Finally on Sunday, they were off at Blackburn College securing two victories, 9-0 and 10-2. Here is everything you need to know from the weekend. 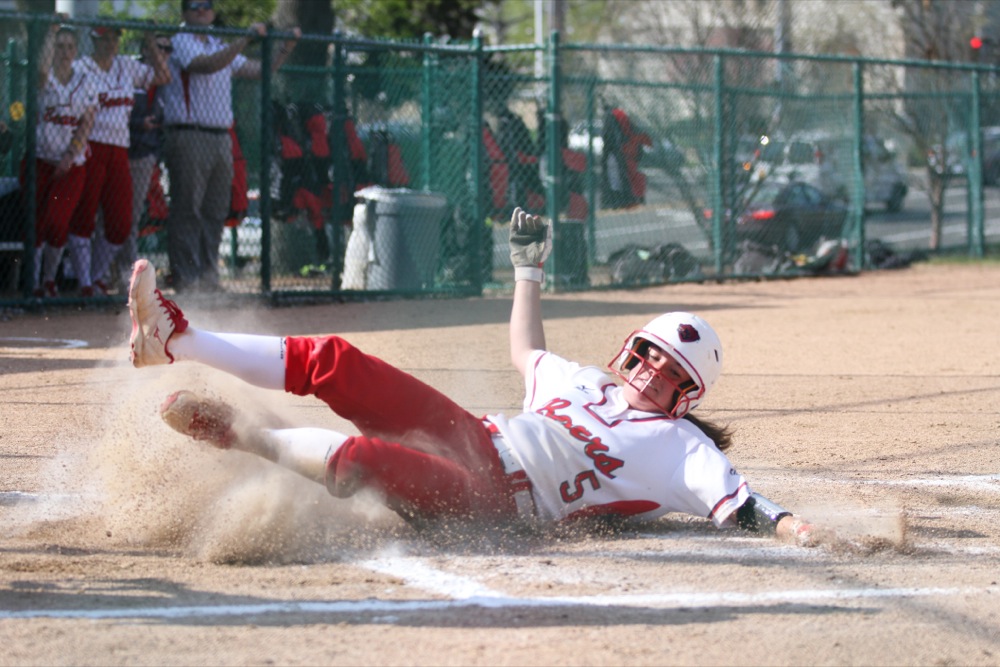 Catcher Halle Steinberg slides into home plate in the Bears’ first game of their doubleheader against Principia on Friday evening. The Bears won the 4 p.m. and 6 p.m. games 11-0 and 8-0, respectively.

As one might expect, a lot of Bears had strong performances, but it was junior left fielder Hannah Mehrle who stood out, with a 12-21 weekend. After going hitless in her last two games from the previous weekend, Mehrle raised her average to 0.477, while collecting 10 RBIs and scoring six runs.

When she wasn’t shutting down opposing hitters to the tune of nine hits and 17 strikeouts in 13 innings of work, sophomore Maggie Clapp also finished the weekend with nine hits and seven RBIs.

The Bears’ workhorse, senior Annie Pitkin, only made three appearances in the six game weekend but still managed to tally 19 strikeouts in 15 innings, while only allowing four hits.

With Clapp and Pitkin so dependable and consistent, it is easy to forget how deep the Bears rotation goes. Sophomores Mackenzie Gauden and Anna McKee enlightened onlookers as they saw their first action on mound this weekend since the middle of March.

In the second game against Principia, Gauden relieved Clapp in the third inning. She pitched three innings, allowing one hit and striking out five to earn the win. McKee relieved her for the final inning and struck out two. The Bears followed the same formula in their second game against Blackburn. This time, Gauden gave up two unearned runs in three innings of work, while McKee struck out the side in the sixth.

With eight games to play, freshman Taylor Arends (44), junior Janet Taylor (41) and Mehrle (39) are all within striking distance for the single season runs-scored record of 48, which was set in 2010 by Ashton Hitchcock.

Pitkin finished the weekend with 206 strikeouts on the year, crossing the 200-strikeout threshold for the second straight year.

Were the season to end today, Taylor would set the single-season on base percentage record with a 0.554 mark. Taylor tops that threshold thanks in part to her 22 walks, which also currently ties a single season record.

Next weekend, the Bears will begin the first leg of an eight-game home stand to close out the season. This Saturday, it’s a doubleheader against Monmouth College (Ill.) for senior day. Last season against Monmouth, Pitkin set the single-game strikeout record with 18.