Although senior third baseman Adrienne White is currently a major cog in the Washington University softball team’s offensive attack, four years ago she had to pester head coach Leticia Pineda-Boutte just to get on the roster.

“I actually had to kind of stalk coach [Pineda-Boutte] to let me try out,” White said. 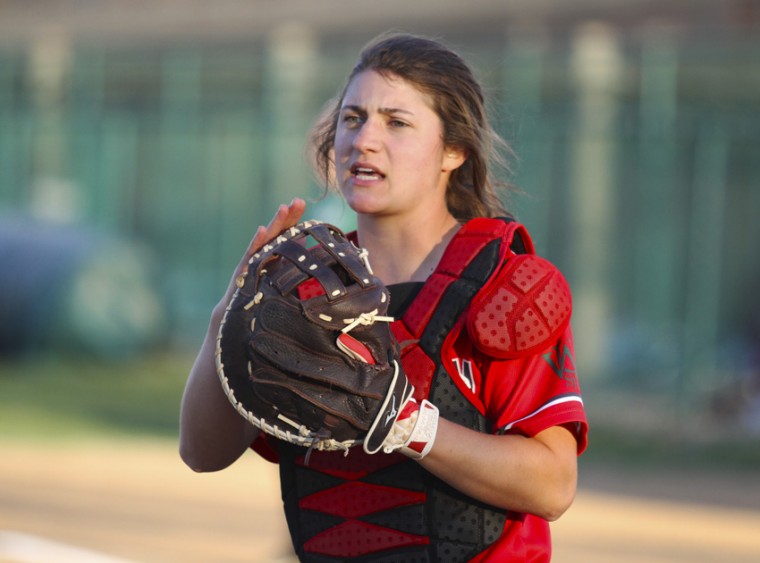 Adrienne White calls for a time-out against Illinois Wesleyan on March 22. Adding power to her hitting repertoire, White has recorded eight home runs in 28 games, which ranks second in Division III.

In 2011, a large freshman recruiting class meant Pineda-Boutte was not holding open tryouts. After several emails, an impromptu fall practice visit and some time spent loitering around the Wash. U. Athletic Complex, White was able to secure a tryout.

Since maneuvering her way onto the team, White has been a model of consistency at the plate, hitting a combined .372 in her first three seasons. This season, however, she has added power to her repertoire, clubbing eight home runs in 28 games, good enough for second in Division III. Before this year, the most she had ever hit in a season was three.

When asked to pinpoint the source of her player’s newfound power, Pineda-Boutte identified a revamped approach at the plate.

“She’s swinging at 100 percent every time and when you do that, it increases your chances to drive the ball somewhere, and it just so happens she’s doing it every time,” Pineda-Boutte said.

White noted that moving from first to third in the order required a change in approach.

“You kind of have to take a different mental approach because at first you’re just trying to get on base, but when you hit third, you have to take bigger swings because you’re in bigger spots and you have to drive people in,” White said.

Additionally, White pointed to a change in her offseason training regimen. With no obvious starting catcher on the roster heading into spring, she prepared herself to take over everyday responsibilities.

“I was doing a lot more lower-body stuff because catching can be kind of grueling,” White said.

While the emergence of sophomore Halle Steinberg at catcher has spared White full-time duties, the training has allowed her to generate a more powerful swing.

“Hitting, especially for softball, is all about your legs,” White said. “So I think the lower-body work really helped my power.”

For inspiration, White has a picture of professional baseball player Albert Pujols mid-swing taped to her softball locker. White tries to incorporate Pujols’ trademark wide stance and penchant for allowing the ball to travel deep in the strike zone into her own swing. In addition to the traditional tee work and front-hand toss, White, with the help of assistant coach Mitch Thomas, has begun using a hitting platform designed to keep her weight back until the ball is far enough into the hitting zone.

The technical work, in addition to mental and physical changes, has transformed White’s offensive game.

In 28 games played this season, White is batting a respectable .362. Her 33 RBIs are tied for third in Division III. Of White’s 34 hits this season, 20 have gone for extra bases. This translates to a .745 slugging percentage, over 200 points higher than any other Bear this season. White’s defining stretch came during the 10-game University Athletic Association Championship. Already entering the tournament with three home runs in the past four games, White went on to bat .450 with four home runs and 18 RBIs.

Although White currently splits time between catcher and third base, an elbow injury to fellow senior Alyssa Wilson two years ago necessitated White’s move to shortstop for the 2013 season.

“[White] was the one that we thought could take over the position and hold it down and be a good shortstop for us,” Pineda-Boutte said. “She was very unselfish and she said, ‘I’ll play that position, I’ll learn that position.’”

White played all 45 games at shortstop while also batting .381 and collecting 56 hits. In addition to those positions, White spent some brief time playing second base and tried her hand at outfield during the fall of her freshman year. When asked if there was any position she could not play, she admitted pitching was not in her repertoire.

“I think that would be a disaster.” White said.

The single-season record for home runs is currently 11, set in 2005 and 2007 by Jamie Kressel (class of 2007). With 18 games left in her season, White is currently on pace to hit 12. White has cooled off as of late, with just five hits in her last 31 at-bats, but Pineda-Boutte believes the same aggressiveness that transformed her swing earlier in the year with continue to pay dividends.

“As long as she commits to a swing, she’s going to be fine and she’ll give herself a chance,” Pineda-Boutte said.