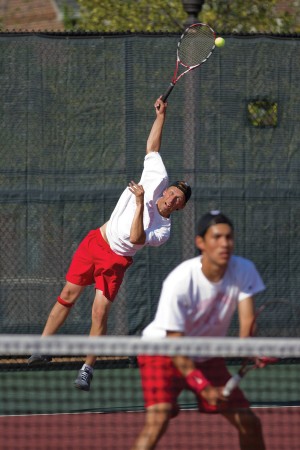 Senior Max Woods serves the ball against UMSL on April 13. Woods and No. 1 doubles partner senior Issac Stein were 2-1 over the weekend at the UAA Championship.

After a commanding 9-0 victory over Case Western Reserve University and a 5-3 win over the University of Chicago, the Washington University men’s tennis team was swept by Emory University, 6-0, at the University Athletic Association Championships last weekend in Beverly, Mass.

The Bears headed into Sunday’s match against Emory riding a seven-match winning streak, but they dropped all three doubles matches and the No. 1, No. 2 and No. 5 singles matches to seal the loss.

Seniors Isaac Stein and Max Woods lost a nail biter, 8-6, in No. 1 doubles to the second-ranked doubles team in the nation. Following that match, the No. 2 doubles team of junior Cameron Chiang and sophomore Kareem Farah led 7-6, but then dropped the last three games in a 9-7 defeat. Sophomores Gary Parizher and Adam Putterman lost 8-0 in the final doubles match.

“It’s obviously a big rivalry,” Stein said. “[Emory] made very few mistakes and they executed the big points better than we did.”

The Bears, who pride themselves on strong doubles play, plan to use this loss to make adjustments to deal with top teams later in the season.

“[Emory] brings high energy in doubles, and they just shut us down this time,” Woods said. “We have to work harder on our serves, and we need to work on finishing off points at the net and bringing the energy every time.”

In Saturday’s semifinal match against Chicago, the Red and Green avenged a 5-4 loss on April 2 that snapped its four-year home winning streak at the time.

“We were just extremely focused and very motivated,” Stein said. “There was a little extra motivation for us because we wanted to get revenge for that loss, and we were rock solid from the top to the bottom to get the victories we needed.”

In their earlier matchup with Chicago, the Bears were swept in doubles, putting them in a hole entering singles play. This time, the Bears led 2-1 after doubles, giving them an edge for the rest of the day.

“We came out prepared this time,” Woods said. “The big thing that we learned is that we have to be prepared and work hard in doubles.”

Friday’s sweep of Case Western provided a confidence booster that the team needed to propel itself further through the tournament.

“They are an up-and-coming team, with a lot of good players, and they have been winning some big matches this year,” Woods explained. “We came out well-prepared and fired up, and it was a great feeling to beat them.”

The Bears (14-5) will take on Grinnell College on Saturday, April 23 at the University of Missouri-St. Louis courts.