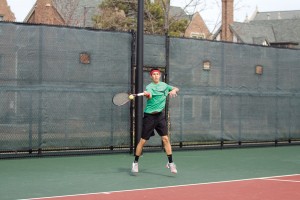 Senior Isaac Stein unleashes on a forehand against Graceland University on March 12. Stein, the top-ranked player for the Bears, went 3-2 in doubles and 1-4 in singles in the Bears’ five matches against top-20 opponents this month.

If this weekend’s matchups in Texas are any indication, then the Intercollegiate Tennis Association Division III top-25 rankings are spot on.

The Washington University men’s tennis team lived up to its No. 5 ranking, defeating No. 11 Trinity University and No. 6 University of California, Santa Cruz but falling to No. 4 Claremont-Mudd-Scripps.

The team had its four-match winning streak snapped in a 6-3 loss to CMS on Sunday, in a rematch of the third-place contest in the 2010 NCAA Division III Team Championship.

“We actually started pretty well in doubles and were able to sustain at No. 2 doubles,” head coach Roger Follmer said. “It’s better we know now [how our doubles teams match up] than when we could potentially play them in [the NCAA tournament].”

The Stags jumped ahead 2-1 over the Bears after winning two of three doubles matches. Junior Cameron Chiang and sophomore Kareem Farah, at second doubles, had the only double victory of the day, an 8-3 win.

“Kareem and Cameron came up with a huge win for us to keep us in the match,” senior captain Isaac Stein said.

All weekend, the Bears struggled in doubles play, picking up just one win in each of the three matches.

With wins at third and fifth singles, CMS pushed its advantage to 4-1, but Wash. U. freshman Tim Noack won his team-leading 14th singles victory of the year to keep the match close.

However, it was Alex Lane, a transfer from National Association of Intercollegiate Athletics powerhouse Azusa Pacific University, who sealed the win for CMS. His back-and-forth victory at No. 1 singles (7-5, 7-6 (7-4)) over Stein gave the Stags their sixth and final point of the match. Senior captain Max Woods had the other singles win for the Bears over Alex Johnson at No. 2 (7-6 (7-2), 3-6, 6-1).

“We didn’t perform during doubles play, but we came back in singles very strong because we knew we needed to strive for a sweep in singles,” Stein said.

On Saturday, the Bears also struggled in doubles play, but the Bears rallied from 2-1 to pick up a quality win against Trinity.

“We played Trinity at their home court on their varsity tennis stadium, and there was a huge crowd,” Stein said. “It was a great day and really fun environment to play in with the loud crowd, which is something we don’t get the chance to do too often.”

Wash. U.’s only doubles victory came at the No. 2 position, as Chiang and Farah defeated their opponents 9-8 (7-5).

Trailing 2-1 going into singles play, the Bears won four of six matches to gain their fourth-straight 5-4 victory of the season. Woods highlighted the win at second singles, where he defeated No. 8 Bobby Cocanougher 6-2, 1-6, 7-6 (10-8).

Sophomores Adam Putterman and Gary Parizher, at No. 3 and No. 4 singles respectively, evened the match at 4-4, and Farah clinched the match for the team at No. 5 singles in straight sets (7-6, 6-4).

The Bears rallied from yet another deficit to beat UC Santa Cruz on Friday, March 25. Stein and Woods defeated Division III’s third-ranked doubles team of Brian Pybas and Parker Larson at No. 1 doubles, but the Bears lost the other two matches.

“The match against Santa Cruz, you give the game ball to Isaac,” Follmer said. “He [went] 2-0, winning both his doubles and his singles matches.”

“It gave us great confidence in our team knowing we could come back in singles play to take the matches,” Stein said of the team’s two wins this past weekend. “We knew what we had to do in singles and came out and fought hard at every single position.”

The Bears (8-3) return to play at home on Saturday against No. 16 University of Chicago for the annual Kids’ Day, which starts at 2 p.m.