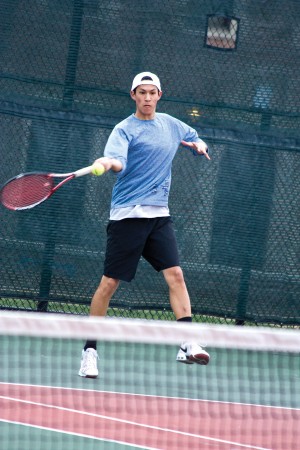 Then junior Isaac Stein hits a forehand against Graceland University last season. Stein, the top singles player for the Bears this season, leads a roster of players that has never lost to an opponent at the Tao Tennis Center. The team last lost at home on March 11, 2007.

The current roster of the Washington University men’s tennis team hopes to continue its run of perfection against Division II No. 20 Northwest Missouri State University this Friday.

The Bears have not lost at the Tao Tennis Center since March 11, 2007, exactly four years prior to the upcoming match against the Bearcats.

“I’ve been forewarned by the [University of Missouri-St. Louis] coach, who is in the same conference as Northwest Missouri State,” head coach Roger Follmer said. “He said he thinks they are actually favored against us. I know this will be a tough match.”

Seniors Isaac Stein and Max Woods, who are the Bears’ No. 1 and No. 2 singles players and comprise the team’s No. 1 doubles team, are proud of their undefeated mark at home.

“I think the streak means something for both our coach and our program,” Stein said. “It’s something we are really proud of. We have played some very quality opponents on our courts, and we will need a very solid team effort [on Friday].”

“They are both extremely tough teams,” Woods said. “We have to make sure we are prepared so that when our time comes, we’re ready to go.”

Follmer explained that the key to beating Northwest Missouri State is to steal the momentum early in the doubles matches, which are played first, so that the team can establish the mental edge heading into singles play.

“I really like it when we really go after teams and try to win and break their resolve,” Follmer said. “We play with heart but also break down and expose their weaknesses. That’s one of the things we’ve worked on.”

This Friday will also be an important opportunity for the team to make a statement: that it has moved on from the John Watts era. Watts, who graduated last spring, is also the Bear’s all-time leader in singles wins, doubles wins and overall winning percentage. He completed his career as the 2010 NCAA Division III National Singles Champion.

However, after losing to the University of Califonia-Santa Cruz three consecutive times during the Watts era, Follmer cited the Bears’ 5-4 victory over UC-Santa Cruz on Feb. 19 as proof that the current team has established its own identity. After this victory, Follmer received a congratulatory e-mail from Charlie Cutler, a former Wash. U. tennis player, who graduated in 2009 with the second-highest overall winning percentage in Wash. U.’s history.

“Awesome to see you finally took down Cruz,” Cutler wrote. “It looks like the team is shaping up pretty well, even without Watts this year.”

The Bears will have to rebound quickly from Friday’s match, as they turn around the next day and play No. 9 Graceland University. Wash. U. has beaten Graceland each of the last four times they have played, but Follmer stressed the fact that no team should be underestimated, especially a team ranked in the top 10.

“Our team goal and mission statement is to treat everybody with respect, but not to fear anybody,” Follmer said.

After this weekend, the Bears will take a seven-day hiatus from action before returning to campus to prepare for a rematch against UC-Santa Cruz on March 25 in San Antonio, Texas.