Wash. U. overcomes all odds in a 3-3 thriller against Rochester

Down 2-0 at halftime and forced to play a man down for 95 minutes against No. 7 University of Rochester, the Washington University men’s soccer team faced its toughest challenge of the season thus far. For weeks, the Bears had been able to rely on their defense to put up zeros, and now it was the offense’s turn to play hero. The Red and Green scored three times in the second half, including twice in the final 15 minutes, and held firm through two overtimes to tie on the road against the YellowJackets. 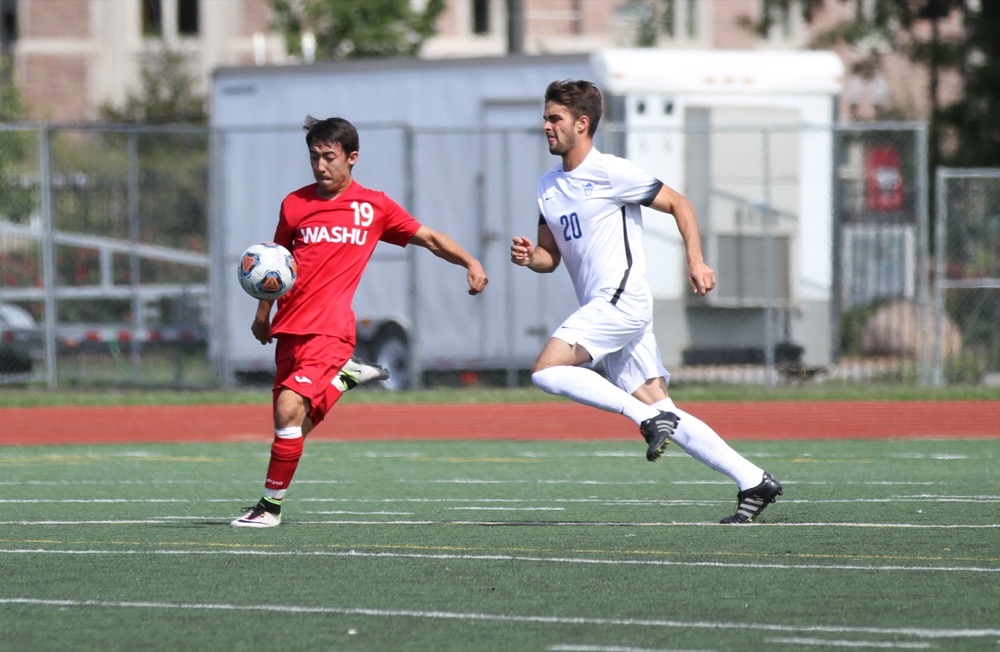 Senior Corey Meehan handles the ball in the Bears’ 4-0 win against Luther. Meehan scored one of the game’s four goals.

Usually masters of ball control, the Bears’ defense allowed four shots in the opening 12 minutes. The pressure peaked in the 15th minute when senior goalkeeper Daniel Geanon received a red card while defending a Rochester breakaway. “It was a close call,” head coach Joe Clarke said of the penalty. “But that’s soccer.”

Senior Nick Tannenbaum subbed in for Geanon following the ejection.

“When [Geanon] got the red card, I was caught off guard,” Tannenbaum said. “I hadn’t warmed up much and knew I would be coming in right at a [penalty kick]. The biggest thing on my mind was just thinking back to the things [Clarke] had told us in the scouting report and getting myself ready to step into goal.”

The YellowJackets converted on the ensuing penalty kick for the 1-0 lead. It was the first goal the undefeated Bears had allowed all season.

Taking advantage of their numbers, the YellowJackets pressured the box early and often. Rochester also had a bit of luck on their side. In the 23rd minute, a Rochester cross into the box ricocheted off of junior back Chris Rieger and into the Bears’ net for an own goal and a 2-0 YellowJacket lead.

“We had our backs up against the wall,” graduate student Jack West said. “We had the option of trying to minimize the damage or get after Rochester and get a result.”

The Bears chose the second option.

Only ten minutes into the second half, the Bears converted the first of their many chances. A free kick from West bounced off the post, where it rattled between several players until sophomore forward Ryan Sproule redirected it to junior back Nick Knight, who capitalized on the mayhem. In the 78th minute, senior Grant Baltes scored the first equalizer to the game, a goal that West engineered as he ran down the right wing and made the key pass into a heavy crowd.

With the momentum shifting in Wash. U.’s favor, the window was open for a comeback. It appeared to shut just as quick minutes later, when a Rochester header in the 84th minute gave the YellowJackets back the lead with less than seven minutes left to go in regulation.

“They are a gritty team,” Clarke said of his players. “They have grit and steel. And when you have both of that, it’s never too late.”

The Bears rewarded Clarke’s faith less than a minute later. Knight scored his second goal of the game on a lofted give from West.

“Our team is very resilient,” Knight said. “Everyone puts everything out on the field, and we don’t quit until the final whistle blows, regardless of the score.”

With the score tied at 3-3, the game headed into overtime. In the first overtime period, Tannenbaum saved a dangerous shot sent from outside the box. After an unexpected entrance forced the team to defend with a man down, Tannenbaum made a career-high six saves.

“Tannenbaum did a great job of coming off the bench and playing well. Nick Knight did well scoring two goals, but it was a total team effort,” West said. “There were no egos out there, as everyone was working as hard as they could for the team.”

After a tense game, the Bears return home for a quick reprieve before taking on Fontbonne University at Clayton High School Tuesday.