By the time junior back Kevin Goon stared down the DePauw University goalkeeper from about 12 yards, eight other members of the Washington University men’s soccer team had assumed the same lonely position. The Bears had battled to a 1-1 tie through 90 minutes of regulation and two 10-minute sudden-death overtimes, but now the hosting Bears found themselves chasing an eighth conversion in sudden-death penalty kicks.

Goon, who was attempting his first career collegiate penalty kick, trotted up to the ball and fired wide left of the post. With that, the season was over. 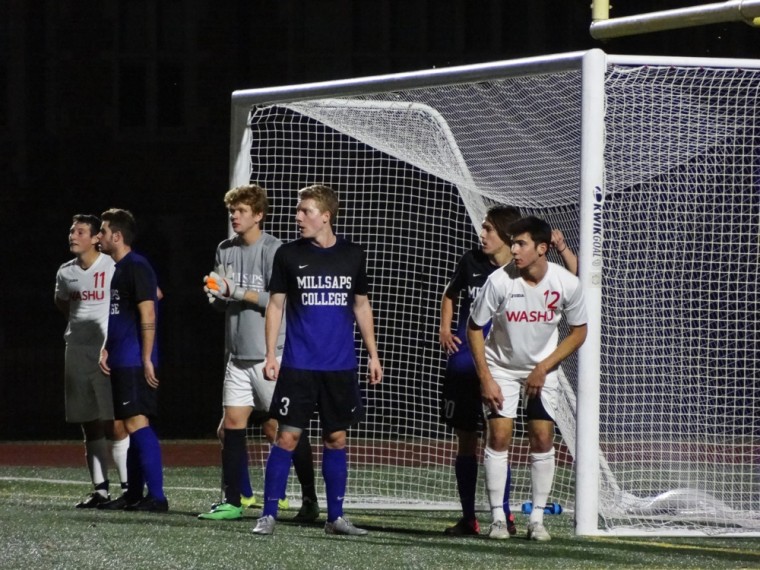 Players line up for a corner kick in the Wash. U. Men’s soccer game against Millsaps College this weekend. The Bears won 4-2 after the Bears’ defense only allowed five shots on goal during the game.

Just about three hours after the Sunday night match started under the striking white lights of Francis Field, the Bears were defeated by the Tigers 8-7 in penalty kicks in the second round of the NCAA playoffs.

The Bears had a chance to snatch victory earlier in penalty kicks. The Bears and Tigers went shot for shot in the first five rounds, but in the sixth, junior goalie Daniel Geanon made a diving save on a ground ball to his left to give the Bears a chance to secure the victory. This time, it was junior midfielder Grant Baltes who struck a line drive to the left side of the net, caught by the DePauw goalie. The Tigers would not offer up another chance.

Geanon could only muster one save in penalty kicks, but contributed seven saves through the first 110 minutes including a pair of highlight-reel tips. First in the 67th minute with the game already knotted at one apiece, Geanon dove left to deflect a point-blank header out of bounds. Then again in the 99th minute, Geanon tipped another ball over the right side of the cross-bar, saving a season ending goal.

“It really helps if you have a good goalie that can bail you out of some situations and he made some really good saves,” senior forward Jack West said.

Despite the final score, both teams received a bevy of opportunities on offense. The Bears put together 23 shots—six on target—and took six corner kicks. Meanwhile, DePauw enjoyed 19, eight and seven in those same categories.

Gratification came almost instantaneously for the Tigers. Only a minute and 34 seconds into the game, DePauw scored on their first shot of the game off a corner kick.

Wash. U., on the other hand, struggled to create opportunities early. The Tigers, running a man-to-man system with an intent to intercept the in-traffic passes, stunted the Bears’ offense to the tune of two shots in the first 17 minutes of play.

The Red and Green made a mid-period adjustment however, focusing on creating space and a numbers advantage.

“Within 15 minutes, I could see, ‘I need to change,’” head coach Joe Clark, who orchestrated a system where the back wings would clear space for the forwards to move up, said. According to Clark, those changes took root at about the 25-minute mark.

Around minute 20, however, the Bears offense appeared to find its rhythm. Between then and halftime, the Bears peppered the DePauw goalie with 12 shots.

Instead, the Bears could only come away with one.

In the 41st minute, sophomore Chris Rieger sent a free kick into the box that was headed into the net by Baltes for his fifth goal of the season.

That would be all the offense the Bears could muster, however, as the Red and Green went quietly in the second and only managed a single shot in either overtime period.

To even reach the second round, Wash. U. needed to first get past Millsaps College. The Majors muscled their way into the tournament by winning the Southern Athletic Association on the back of a fast-paced 2.72 goals-per-game average.

The Saturday night 4-2 victory carried a similar high octane feel. Senior Cole Davis found the back of the net, 21 minutes in, for his first career off rebound off the goalie. Then, just 74 seconds later, sophomore Thomas Hutchings sent a slow loft over the middle that freshman Ryan Sproule buried with a sharp header.

The Majors would cut the lead in half in the 33rd minute, but Rieger converted on a penalty using a ground ball to the left side to rebuild the lead back up to two. The penalty kick was initiated after West was tripped in box.

Rieger found himself in the middle of the action again in the 64th minute when, in a two-on-two situation in Bear territory, he received a dangerous backwards pass. Rieger inexplicably stepped out of his shoe and slipped, botching the hand. All it took was a quick touch pass to and a shot from the right side for the Majors to pull within one.

Baltes would round off the scoring for the Bears in the 84th minute, finding a hole in the bunched up box to give the Bears a cushion

With the win and subsequent loss, the Bears finish the season at 12-4-4, their highest win total since 2011. DePauw improved to 12-3-5 and advances to the quarterfinals to face No. 11 Loras College next weekend.