Men’s soccer shuts out NYU and Brandeis on the road

While most Washington University students were enjoying fall break on campus, the Wash. U. men’s soccer team had different plans, making a statement with back-to-back road shutouts at New York University and No. 7 Brandeis University this weekend.

On Friday afternoon at Gaelic Park in Riverdale, N.Y., the Bears got off to a slow start, reaching the end of the first half in a scoreless deadlock before exploding for four goals in the second. According to head coach Joe Clarke, the difference was a product of improved execution. 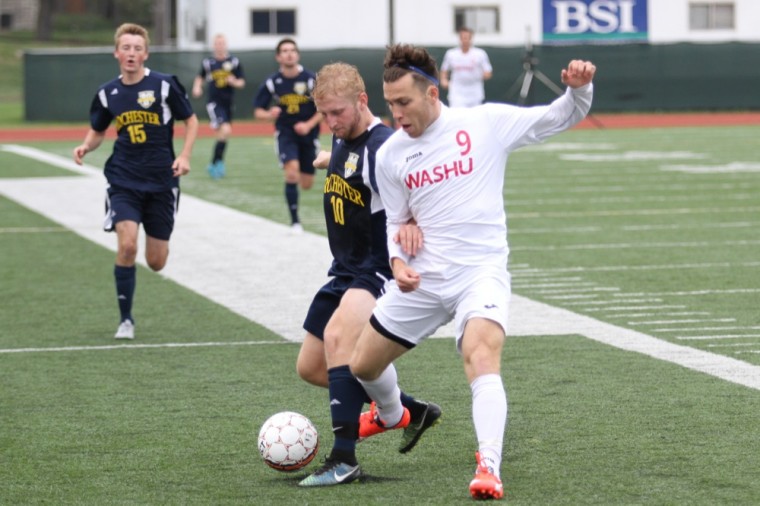 Junior Nick Politan tries to control the ball during the Bears’ Oct. 4 game against Rochester. Over the weekend, the men’s soccer team took on New York University and Brandeis on the road.

“I didn’t really make any changes. We focused on doing a lot better job on the wings, when we were two on two or three on two. And, you know, the halves were relatively similar. We had the majority of the play in both of the halves” Clarke said.

The first strike came off the leg of sophomore midfielder Chris Rieger, who scored on a penalty kick in the 53rd minute. The Bears received the kick after the Violets drew a red card after committing a handball.

From there, the offense flowed for the Red and Green, who attacked relentlessly, outshooting New York 33-5 in the match. Another sophomore midfielder, Thomas Hutchings, notched two goals in the 66th and 75th minutes, and freshman forward Ryan Sproule iced the game with one of his own in the 83rd minute.

“I just think it was really hard for New York, because we started just passing the ball very well and they were down a man and just chasing it, and chances came fairly often after that,” Clarke said. “So I don’t think the score is a true indication of the separation between the teams. I think it’s how the game played out.”

“Thomas has always been a dangerous player,” Clarke said. “He’s been injured a lot throughout his career; most of his freshman year he was hurt. And he got hurt early on here in the pre-season, and so only in the last few weeks has he started to get where he can get out on the field again and help the team out. So I think he’s just having to get comfortable playing with everybody and finding his niche, and he has really good speed and he’s a dangerous player.”

On Sunday afternoon at Gordon Field in Waltham, Mass., Wash. U. pulled off an upset of Brandeis, dealing Brandeis its first loss in over two years at home.

Speaking prior to the game, Clarke envisioned his plan for snapping the 24-game streak.

“We’re going to go out and try to impose our game on them,” Clarke said. “I know they’re good; they’re going to try to do the same to us.

Though the Bears were outshot for just the third time this season, 12-10, they took advantage of the chances they had. The Bears set the tone from the very beginning, taking the lead on a goal by junior Kevin Goon in the sixth minute. Sproule added some insurance with another in the 61st minute.

With the wins, Wash. U. claimed its first two UAA victories, moving to 2-1-1 in the UAA and 9-2-3 overall, including an impressive 7-2 on the road. It’s plus-five goal differential in UAA games is tied for first with Case Western Reserve University.

Wash. U. returns home from its four-game road trip to take on Fontbonne University Wednesday night at Francis Field.