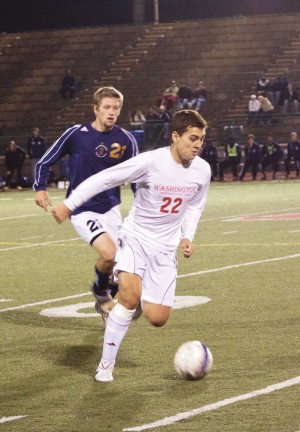 Welcome home. In their first home game in nearly three weeks, four players found the back of the net as the No. 15 Washington University men’s soccer team recorded a decisive 4-1 victory over Principia College on Thursday, Oct. 21.

The win was an encouraging victory after the Bears suffered their first loss of the season in overtime at the University of Rochester four days earlier.

“We just came off a loss and one of our goals was never to lose two games in a row this year, so we wanted to make sure we put them away early,” sophomore midfielder Kenji Kobayashi said.

It was Kobayashi who would get the early score when he netted his third goal of the season less than eleven minutes into the game. Senior John Duncan and freshman Michael Flowers were credited with the assist.

“Randy [Schoen] put a cross in and it dropped right onto Michael Flowers’s head. Flowers put it back for me,” Kobayashi, who has now scored in back-to-back games, said. “I turned around and there was no one in front of me so I just put it in the goal.”

“We didn’t do anything different than we do all the time,” head coach Joe Clarke said “We tried to pass the ball and get a lot of players involved in the attack, and have our forwards very active – and keep the ball on the ground, that’s probably the main thing we try to do.”

The Red and Green would score once more before the end of the first half. Freshman Stephen Spanos scored the first goal of his Wash. U. career after junior Dylan Roman sent him a pass in front of the box, giving the Bears a 2-0 advantage.

The Bears began the second half by allowing an uncharacteristic own goal. When freshman Nik Patel attempted to clear the ball, it was intercepted by a Principia player and then deflected off the foot of a Bears’ player past freshman goalie Jonathan Jebson.

“I don’t like giving up a goal, but it was an own goal, what can we do?” Clarke said. “It was going way out of bounds, hits one of our players and goes in.”

Despite the defensive fluke, the Bears quickly took control of the game again. In the 64th minute, what appeared to be intended as a long pass from senior midfielder from Cody Costakis landed in the top corner of the net, out of reach of Panther goalkeeper Samuel Thomas.

“It was good to prove that we could come out and score a couple goals,” sophomore midfielder Brian Wright said. “One defensive meltdown, [we were] not thinking, but we showed, again, that we could come back and put the game away when it mattered.”

The Red and Green appeared to have wrapped up the game as regulation wound down – but they weren’t done scoring yet. Flowers received a pass from fellow Spanos 30 yards from the goal with just 17 seconds remaining in the game. With a hard strike, Flowers recorded his second goal of the season and hit the turf in celebration. The game’s four goals were the most since the team scored seven against Webster University in its season opener.

“We played with a lot of different guys in the offense, and different combinations, and it seemed to pay off just to change things up every once in a while,” Kobayashi said.

The Bears play their final non-conference game tonight against Concordia-Moorhead at 7 p.m. on Francis Field. They will face three University Athletic Association teams to round out the season: Brandeis University, conference-leading New York University, and the University of Chicago.

“We just want to keep winning and keep our record good to give ourselves the best chance of making the tournament and doing well,” Wright said.