There was this notion for weeks that the Washington University men’s basketball team was going to have to win out the regular season in order to capture the UAA crown. Turns out they didn’t need to.

After a month and a half of nipping at the Bears’ heels from a game away in the standings, the University of Rochester finally faltered. The Yellowjackets suffered an unexpected loss against Case Western Reserve University in the regular season’s penultimate weekend. The defeat, plus another perfect road series from the Red and Green, guaranteed Wash. U. its 14th UAA title and first since 2014. 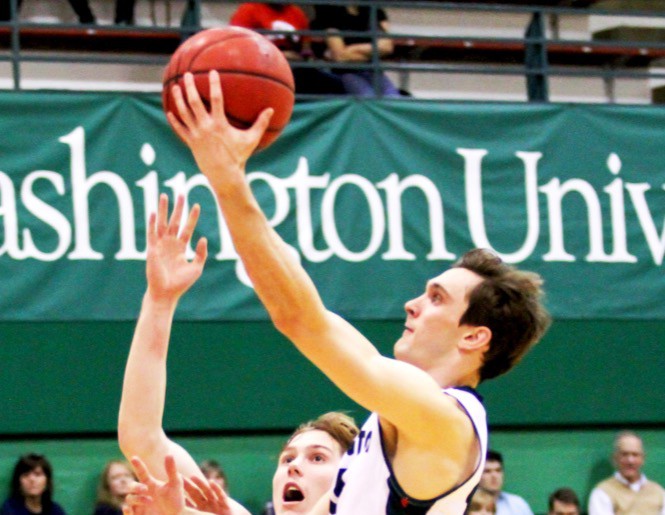 Junior David Schmelter shoots in a game aganist Rochester. The Bears face the University of Chicago this weekend at home.

“It’s been a goal since last year, not just this year,” head coach Mark Edwards said.

Edwards’ comment has extra emphasis if you remember how the Bears finished last season. Everyone knows about the six-game UAA losing streak that derailed Wash. U. in 2016. But what gets less attention is the fact that they ended the year with five straight conference wins. Slap that onto the Bears’ 12-1 UAA record in 2017, and you’ve got nearly a year and a half of domination.

“It carries a lot of weight,” Edwards said of the conference title, although he did acknowledge a lack of nationally ranked UAA programs this year. This led to an unusual lack of parity.

Three teams finished within two games of the UAA championship in 2016; four in 2015. This year, just the Bears and the Yellowjackets duked it out at the top of the standings, with Wash. U. currently leading third place Emory University by a whopping four games.

You can thank a lot of roster turnover for that.

All this has meant that Wash. U. and Rochester own a collective 0.846 in-conference winning percentage while the rest of the UAA scuffled along at 0.385.

Still, there are occasionally surprises, like when a veteran Rochester team lost to Case Western this past weekend. The Spartans went winless through the first half of conference play, but against the UAA’s second place team, they grabbed 19 offensive rebounds and took 21 more shot attempts to overwhelm the Yellowjacket defense.

The Bears are conference champions, but based on the classic counting stats, Rochester profiles as the slightly better team. On offense, the Yellowjackets score nearly as many points, shoot a tick more efficiently and cough up roughly the same number of turnovers as Wash. U. On defense, Rochester holds a clearer advantage, allowing just 65.5 points per game to Wash. U.’s 71.1.

What the UAA title really came down to was consistency. Rochester relies much more on three-point shooting than Wash. U. And when those shots don’t fall, as is sometimes the case with a skill that fickle, the Yellowjackets fall into trouble. The 21-3 Yellowjackets are suddenly 2-2 when shooting 25 percent or less from beyond the arc. The Bears are 7-2 under the same criteria. Unsurprisingly, Rochester shot 4-24 from range when the team lost to Case Western.

Junior forward Andrew Sanders goes up for the dunk in the Bears game against UC Santa Cruz. The team clinched its 14th conference championship earlier this week.

Not that the Bears haven’t had their own unexpected hurdles. In what ended up being its conference clinching game against Brandeis University, Wash. U. had to face a Judges team that was, frankly, shooting out of its mind. On the season, Brandeis averages 41.8 percent from the floor, plus 36.3 from range. This past Sunday they shot over 60 percent in both categories. The Bears still won 95-91.

“We didn’t say, ‘Oh my gosh’ when they started hitting three,” Edwards said. “We just said, ‘OK, we’ve got to do this, this and this.’” What the Bears did was score 50 points in the paint and pull down a plus-seven rebound margin.

“Just winning the games isn’t going to make you a better team,” Edwards said. “What makes you a better team is being able to go into Brandeis like last Sunday and play a team that goes 17 for 28 from three-point range, and still win. These are the things that we were missing last year.”

The plan this Saturday for the Bears was to host the University of Chicago with the UAA championship on the line. Even though there won’t be the same gravity now, Edwards isn’t letting his team play soft.

“We’re going to win, there is no doubt about that,” Edwards said.

The plan is to play the regular rotation. As far as what he’ll be looking for out of his athletes, Edwards would like to see them shut down Chicago’s three-point game. The Maroons currently lead the UAA in three-point field goal percentage, so it’ll likely be a tough challenge as the Bears prep for the NCAA Tournament, which starts March 3.