The Bears can finally breathe deeply. For weeks, No. 5 University of Rochester had nipped at their heels, one game behind in the standings and forcing the Red and Green to win out in order to capture the UAA crown. 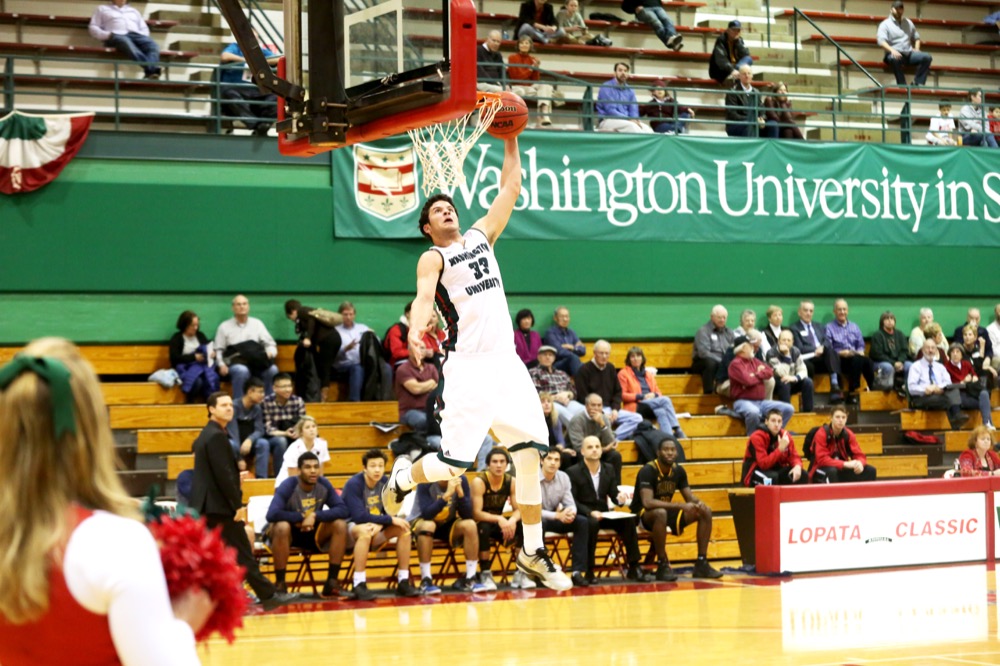 Andrew Sanders goes up for the dunk in the Bear’s game aganist UC Santa Cruz on Dec. 2. The Bears secured the UAA conference championship this weekend with back-to-back wins.

But then, the Yellowjackets gave the Red and Green the opening they needed. Rochester suffered an unexpected loss to a sub-.500 Case Western Reserve University team on Friday, handing the Bears their first conference title and automatic bid to the NCAA tournament since 2014. Now, the pressure is off when the Bears host the University of Chicago next Saturday for their regular season finale.

In Friday night’s 91-66 win against New York University, Wash. U. opened up the scoring with a flurry of plays inside the paint. Junior center David Schmelter scored the first points on an offensive board and a layup. Junior forward Andrew Sanders made the score 6-3, finishing through contact at the rim after collecting a threaded bounce pass from junior guard Jake Knupp. Fellow junior guard Kevin Kucera then drove to the rim and stopped short, dropping the ball into the hoop with a right-handed tear-drop floater. Three possessions later, Kucera dished to Schmelter, who got to the basket with one hop and finished with his left hand. Less that four minutes into the game, the Bears had already built a 13-5 advantage.

NYU, however, stuck in the game with solid three-point shooting. The Violets shot 7-19 from beyond the arc in the first half. The one of those seven cut the Bears’ lead down to just two with seven minutes left to go before halftime.

That would be as close as NYU would get. Wash. U. then exploded for a 22-5 run to end the half. Schmelter and Sanders scored 13 and 14 first-half points, respectively.

Kucera tallied a career-high 12 assists while directing interior traffic, moving him into tenth all-time in the Bears’ record books. Head coach Mark Edwards was happy with the numbers from his point guard, but equally happy with how he got them: without giving away the ball.

“[Kucera] had twelve assists and how many turnovers? Only one,” Edwards said.

The Bears’ defense cracked down in the second half, holding NYU 36.1 percent from the field. According to Edwards that mark allowed Wash. U. to pull down a plus-14 rebounding margin.

“Our defense was very solid, and we forced a lot of bad shots which we turned into rebounds,” Edwards said.

Sanders finished the game with a team-high 21 points. Schmelter chipped-in a season-high 17.

Sunday morning’s matchup ended up being a much tighter affair as Bears eked out a 95-91 victory over Brandeis University in Waltham, Mass.

In the first half against the Judges, it was a different pair of front court players providing the scoring. Junior forward Matt Highsmith hit six of eight attempts for 12 points off the bench in the first 20 minutes of play while senior forward Clinton Hooks added eight points of his own.

While the Bears thrived inside, the Judges, however, shot their way back into the game from range. With the Bears up by ten with four and a half minute to go till halftime, Brandeis drained five three pointers to close the deficit to two heading into the locker room.

The Bears started the second half with a solid 8-3 run, capped off by lay-up from senior guard Michael Bregman on an underneath feed from Kucera. The Judges, however, continued to respond with efficient long-distance shooting. Just two plays after the Bregman’s layup, Brandeis’ senior guard Robinson Vilmont found himself wide open on the left wing, and drained the three, bringing the lead to just two points. Just under a minute later, a lay-up from junior forward Jordan Cooper gave the Judges their first lead of the game, 58-57.

From there on, the game, and the lead, went back and forth. Kucera put the Bears back up three with an acrobatic and-one play, finishing at the hoop while being knocked out of bounds. The next play, Brandeis forced a tie with another three. Over the next five minutes, strong finishes around the basket from Highsmith, Sanders and Schmelter once again built the Bears a small lead. And once again, the Judges came roaring back, this time Vilmot setting his feet and hitting a three to tie the game at 82.

After the Vilmot shot, Wash. U. finally managed to pull away. Sanders drove to the hoop and drew the foul, and sunk both shots. On the next play, Brandeis threw the ball away on a miscommunication, giving the Bears the opportunity to make it a two-possession game. Schmelter capitalized on this, finishing an old-fashioned three-point play on an assist from Knupp, putting Wash. U. up five.

The Bears almost threw Brandeis a lifeline with five seconds to play, fouling freshman guard Eric D’Aguanno on a three-point attempt. D’Aguanno made two of three free throws, and Brandeis, forced to foul with mere seconds remaining, sent Knupp to the line. Knupp made one of two shots at the charity stripe, icing the four-point win.

The two wins this weekend improved the Bears’ UAA record to 12-1.

With the conference title, the Bears can now set their sights on the NCAA playoffs.

“We want to be in the NCAA tournament, playing our best basketball as UAA champions,” Edwards said.

Before that, the Bears will have to host the University of Chicago and their conference-best 83.4 points per game offense.