Knupp not enough as men’s basketball struck down by Rochester

After weeks of torching opponents on the offensive end, the Washington University men’s basketball team was held punchless against the University of Rochester.

Up against the best defense in the University Athletic Association (UAA), the Bears shot 34.8 percent from the field, a season low, and went an anemic 5-22 from beyond the arc. Wash. U. fell to the Yellowjackets 61-74 for their first loss since Dec. 17—a total of 13 games ago. 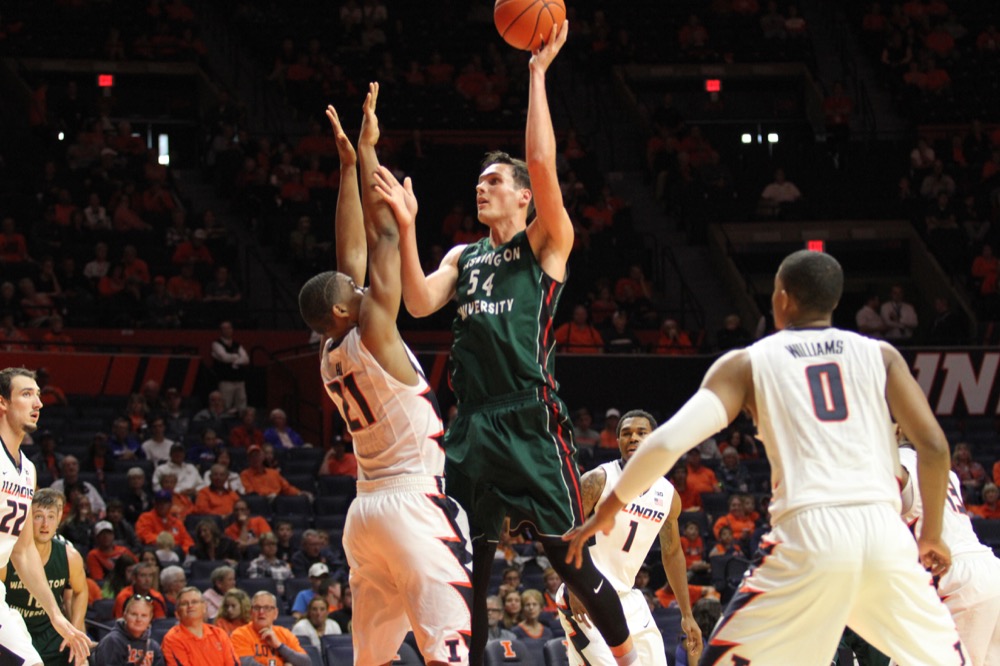 Junior center David Schmelter goes to the basket in a game aganist Illinois. The Bears will face New York University next.

“You never know what’s going to happen, when you play two good teams against each other,” head coach Mark Edwards said. “[Rochester] took us out of a lot of stuff, and they were the better team today.”

Rochester entered the weekend as the top defense in the UAA, leading the conference in scoring defense (63.8 points per game), field goal defense (37.8 percent), three-point field goal defense (29.0 percent) and steals (8.4 per game). In those 20 games, Rochester had limited opponents to less than 60 points in 11 of them.

And while the Bears broke 60 in this contest, they didn’t fare much better than other Yellowjacket opponents. After senior guard Michael Bregman scored on Wash. U.’s second possession of the game, the Red and Green went nearly seven minutes before scoring again. The Bears totaled just 21 points through the first 20 minutes, their lowest scoring half since December 2015.

Rochester’s defense switched smoothly on picks and effectively brought help inside the paint.

“It wasn’t any one thing. They just played really good defense,” Edwards said. “It was frustrating that we couldn’t get the shots that we wanted, and we didn’t make them when we wanted.”

The Bears struggled mightily from the interior as the Bears’ front court shot 26.5 from the field. This includes a zero of six performance from junior center David Schmelter and two of nine from senior forward Clinton Hooks. Even junior forward Andrew Sanders, who has averaged 22.8 points per game, was held to just 11 points. Sanders managed to reach double digits, despite being held scoreless through the first 17.5 minutes of play and missing seven of his first nine shots.

Junior forward Matt Highsmith had the lone efficient day in the Bears’ front court, hitting two of his four attempts and five of six free throws for nine points.

Junior guard Jake Knupp was the brightest spot of the afternoon for the Bears, as he matched a season-high with 17 points, including all five of Wash. U.’s three-point baskets. It was a first-half three pointer from Knupp that gave the Bears their only lead of the night. Another three from him brought Wash. U. to within five, with two and a half minutes left to go in the game. Each time, Knupp drained a shot from beyond the arc, it seemed to breath new life into the Red and Green.

Normally, Knupp is one of the Bear’s better options from range. However, the guard had been struggling from the three-point arc, hitting just one of his 14 attempts in his past five games before Rochester.

The guard credits the turnaround to a conversation he had with assistant coach Caleb Lawson before Sunday’s game.

“I was just stepping into my shot,” Knupp said of his shooting form against Rochester. “Lately, I’ve been backing up on my three, and [Lawson] said step into it, don’t back up and it worked.”

But even Knupp’s bounce-back performance couldn’t help on a day when little else went right for the Bears.

With Wash. U. down by five and just two and a half minutes left to play in regulation, all the Red and Green needed was a stop on defense for a real shot at stealing the game from Rochester. Instead, what the Bears got was the final nail in their coffin.

On the ensuing possession, Wash. U. allowed the Yellowjackets to pull down two offensive boards, before sending them to the free throw line anyway.

“When you get it that close, you can’t give them the score,” Edwards said. “When you put yourself in a hole, that means that each mistake or each error like that has greater consequences.”

The Yellowjackets hit all six of their free throws in the waning seconds to build the final 13-point margin.

With the loss, Wash. U. drops to 18-4 on the season, but more importantly, the Bears miss out on a prime opportunity to put some distance between them and Rochester in the UAA standings. For weeks, the Bears nursed a one-game lead on the Yellowjackets. But when Rochester lost to the University of Chicago and the Bears smoked Emory University by 29 points on Friday, Wash. U. was handed a prime opportunity to go three games up, with three games left to go in the conference schedule.

Instead, the Red and Green are back to a slim lead.

“As long as we win out, we’ll win the conference,” Knupp said. “We control our own destiny.”

The Bears can start next weekend as they head to Pleasantville, N.Y. to face New York University on Friday. Two days later, it’s up to Waltham, Mass. for a matchup against Brandeis University. The Violets and Judges are two of the weaker opponents in the UAA, with conference records of 2-9 and 3-8, respectively.