The home crowd erupted when sophomore guard Kevin Kucera connected on a 30 foot buzzer beater over a Yellowjacket defender. Not that it mattered.

For the third straight game, the Washington University men’s basketball team was defeated by a single bucket in heartbreaking fashion. This latest installment came at the hands of the University of Rochester, who were up by five by the time Kucera could provide his last second score. Wash. U. would drop the Friday night game 75-73. After dropping a pair of home games last weekend to Brandeis University (69-66) and New York University (75-72) in similar single-score fashion, the Bears must feel like they are stuck in “Groundhog Day.” 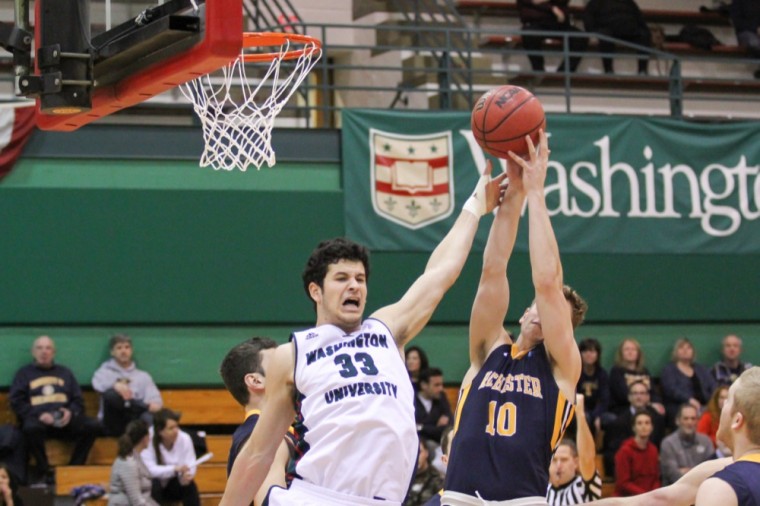 Forward Andrew Sanders, the Bears’ top scorer with 14 points, tries to rebound the ball in the team’s game against Rochester on Friday night. The Bears lost the game 75-73 and also lost against Emory 73-82 on Sunday afternoon.

“We get down the stretch and we start pressuring ourselves to make the big play or make the great pass or hit the great shot,” senior guard Luke Silverman-Lloyd said. “I think we’ve got to take a deep breath in these situations and relax in those moments and let ourselves play good basketball.”

Aside from Kucera’s prayer, the Bears failed to register a single basket in the final eight minutes of play. The Bears missed nine shots in total over that span, but managed to hit 10 of 12 free throws to keep pace with the Yellowjackets.

In a game that featured 15 separate ties, Rochester managed to pull ahead by one with an old fashioned three-point play in the final 48 seconds.

The Bears then found themselves down by three after a turnover by junior forward Clinton Hooks and the ensuing foul. For the third time in as many games, the Bears tried to get the ball to their best three-point shooter, Silverman-Lloyd. Silverman-Lloyd and his 41 percent three-point percentage rattled a shot off the rim, effectively sealing the loss. Rochester would make two more free throws to put the game out of reach.

Silverman-Lloyd ended the game with 12 points, but missed his final eight shots of the night.

“It’s tough being a shooter because, on any given day, you could make all your shots or you could miss all of them,” Silverman-Lloyd said. “Quite honestly, I’m very comfortable in that role, having to take the last big shot. I embrace the opportunity to do that.”

Despite the eventual heartbreak of the loss, the opening minutes of Friday’s game appeared to write a different script.

“The kids came out ready to play basketball,” coach Mark Edwards said. “They were picking the shots that they wanted and shot them with confidence.”

The Red and Green connected on eight of their first nine possessions, including four straight three-pointers to sprint out to a 20-7 lead in the opening 4 1/2 minutes of play.

The Bears went ice-cold after that initial run. Excluding the 8-11 they shot in the opening series, the Red and Green connected on only 25.5 percent from the field and 25 percent from beyond the arc. Rochester, on the other hand, shot 45.6 percent overall. Certainly not a clinic, but enough to chip away at the lead by the end of the first half.

Six Bears scored in double figures and sophomore forward Andrew Sanders provided a double-double—the team’s highest number of points (14) and rebounds (12). Normally a strong interior team, the Bears were outscored in the paint 30-16.

Sunday afternoon’s 82-73 loss to Emory University was a whimper by comparison. After trailing 43-40 after the first half, the Bears were outscored 39-33 in the final 20 minutes. While the Bears shot a respectable 11-24 from the floor, the Eagles outpaced them by converting 71.4 percent of their free throws.

The Bears were able to pull within five with 8 1/2 minutes to go thanks to a mini 10-4 run, but they were unable to find the extra offense to close the gap.

Sophomore center David Schmelter had a career-high 16 points along with seven rebounds. Four other Bears scored in double figures.

The Bears’ second-half troubles manifested in missed layups, rough transition defense and their own free-throw trouble. When the Bears went cold on Friday, foul shots kept them in the game. In the second half against Emory, they hit seven of 14.

“Somebody misses a free throw, and in his mind he can’t help but say, ‘here we go again,’” Edwards said. “Somebody misses the layup, and somebody makes a dumb foul or doesn’t get back on defense in time. Each little thing that works against you is magnified.”

According to Edwards, however, those missteps do have a remedy.

“Grow up, mature, accept the responsibility,” Edwards said. “Believe in themselves…Keep working hard at it and they’ll be fine.”

For a program that is used to perennial success, the Bears have struggled mightily of late. The Bears’ current four game losing streak is the Bears’ longest since 2010-2011 and drops them to 4-6 at home on the season. No Bears basketball team, men’s or women’s, has ever suffered a losing season in the 31-year history of the Field House. While this Bears team has already secured the worst home court winning percentage in program history, they can at least salvage that statistical footnote if they win out their final two home games against Case Western Reserve University and Carnegie Mellon University. Carnegie Mellon currently sits dead-last in the eight-team University Athletic Association standings with a 1-6 record while Case Western is tied for sixth with Wash. U. at 2-5.

The Bears will actually face Emory and Rochester on the road again next week. With playoff aspirations likely nonexistent, the final seven games in their schedule become matters of growth and pride.

“I think the big thing is to be able to keep hold of that team and make sure that the team is ready to bounce back and play another one,” Edwards said. “We’ve learned how to lose; now we’ve got to learn how to win.”

More photos from this game available for purchase at studlife.smugmug.com/sports.