For two straight games, Washington University Men’s Basketball found itself in need of a three-point play in its final possession. Each time, the team came up short.

In a 69-66 Friday night heartbreaker to Brandeis University, the Bears looked to senior guard Luke Silverman-Lloyd, whose shot from the top of the arc sailed off target with five seconds left. On Sunday, sophomore forward Andrew Sander’s pass to Silverman-Lloyd was deflected and recovered by a New York University player to seal the 75-72 loss. 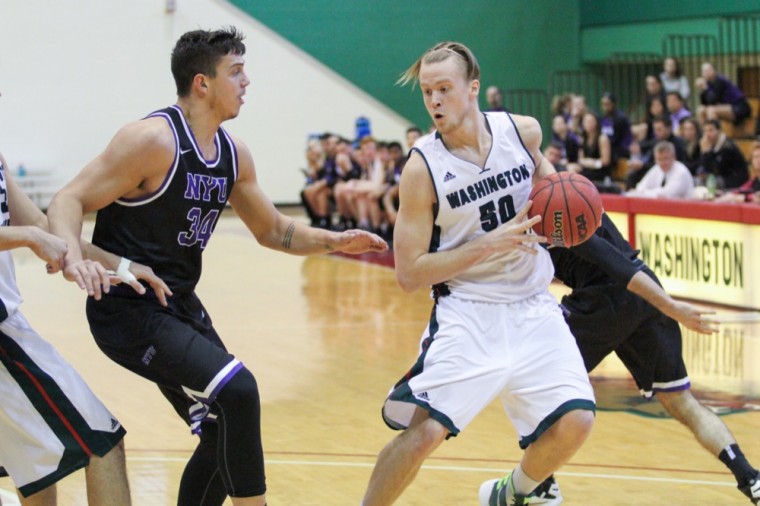 Forward Matt Highsmith forces his way to the basket in the Bears’ game against New York University. Highsmith led the team with 14 points in Wash. U.’s 75-72 loss.

With the pair of home defeats, the Bears fall to 10-6 overall and 2-3 in the UAA, all the way to fourth place in the conference standings. This is only the second time the Bears have lost back-to-back conference games since 2011. Along with a pair of losses against the University of Chicago and Wittenberg University, the Bears are now 2-4 since Dec. 30, their worst record over a six game span since the 2010-2011 season, when they went 13-12.

“We have a lot of confidence in our team, just two unfortunate games, the way they ended there. But we have just as much confidence as we did in the beginning of the season,” sophomore forward Andrew Sanders said.

Sanders was one of the few Bears to enjoy a strong weekend, racking up 30 points and 18 boards over the two games.

Fresh off a pair of commanding wins against Carnegie Mellon University and Case Western Reserve University where the Bears shot a combined .493 from the field, the Bears struggled against a sputtering 8-7 Judges squad. The Red and Green shot .362 from the field, exactly 100 points below their current season average, and failed to hit a three until three and a half minutes into the second half. The Brandeis squad, meanwhile, shot .521 from the field. This was only the second time the Bears have allowed an opponent to shoot over 50 percent, the other being a 67-57 loss against Illinois Wesleyan University.

Guard Luke Silverman-Lloyd dribbles down the court in the Bears’ game against New York University. Silverman-Lloyd scored 13 points in the game while making three of five three-pointers.

Eleven minutes into the first half, the Judges were nursing a 22-13 lead thanks to a 14-5 run where they shot 5-7. A late surge by the Bears, however, sent both teams into their locker rooms with the game all tied up at 31.

In the second half, the Bears continued to struggle to find open looks, and their saving grace came at the charity stripe where they outshot the Judges 20-25 to 14-25. Sophomore forward Andrew Sanders had five points in the final minute to keep the Bears within striking distance. With five seconds left and trailing by three, Wash. U. looked to its veteran guard for buzzer magic.

“At the end of this game we were looking to get the ball to our senior, [Silverman-Lloyd], our leader, so that’s what we did,” Sanders said. “Unfortunately, the shot didn’t go in, didn’t fall this time, but we are happy with the shot we got.”

Silverman-Lloyd not only has a career 43.6 three-point field goal percentage, but he was also coming off a career weekend against Case Western and Carnegie where he shot 83 percent from beyond the arc and scored 39 points. Against Brandeis, Silverman-Lloyd struggled with efficiency, going 4-13 from the field and 3-10 from range for 15 points.

The other top performer against Case and Carnegie, Sanders had another strong game with a double-double of 12 rebounds and a team-high 23 points, going 11-13 from the line.

In the Brandeis game, the Bears’ cold shooting meant they were chasing a deficit all evening.

Against NYU, they had to watch their win slip away. After trailing by as much as 12 for the entire contest, the Violets went ahead 73-72 with 35 seconds to play. On the next possession, Silverman-Lloyd missed a three-point attempt, forcing the Bears to foul and putting them down by three with 15 seconds to play.

“We were just going to run a little weave and just try to get the guys open on the perimeter for the jump shots,” head coach Mark Edwards said.

Eventually, the ball found its way to Sanders’ hands. The ensuing turnover sealed the frustrating loss.

Despite the defeat, the Bears enjoyed a balanced offensive attack with all 11 players scoring. The lone blemish on the afternoon was a 11-17 performance at the foul line. Sophomore forward Matt Highsmith led the Bears with 14 points on 7-13 shooting. After a rough game against Brandeis and despite missing a critical shot against NYU, Silverman-Lloyd enjoyed a strong shooting performance, going 5-12, and 3-5 from range, for 13 points.

The Violets ended up taking the lead in the waning seconds, hitting five of their final eight shots, but the Bears only managed to fire off four attempts, all misses in the final 3 1/2 minutes thanks to five turnovers.

“Those are all results of decisions, and I think that’s what we need to work on, is getting experience making decisions, tough decisions that are going to cost you the game if you don’t make the right one,” Edwards said.

The Bears have five days to lick their wounds before they are back in the Field House again to face the University of Rochester and Emory University on Jan. 29 and Jan. 31, respectively.