Men’s basketball looks to advance past second round

Three years, three second-round exits. Dating back to the 2011-12 season, the Washington University men’s basketball team has qualified for the NCAA Division III tournament each season only to bow out in the second round. After earning an at-large bid to the 2015 tournament with a 20-5 overall record and 9-5 University Athletic Association mark, the Red and Green will look to finally get over the hump and reach the postseason’s second weekend this season. Here is a quick look at what to expect from the Bears at this stage of tournament play. 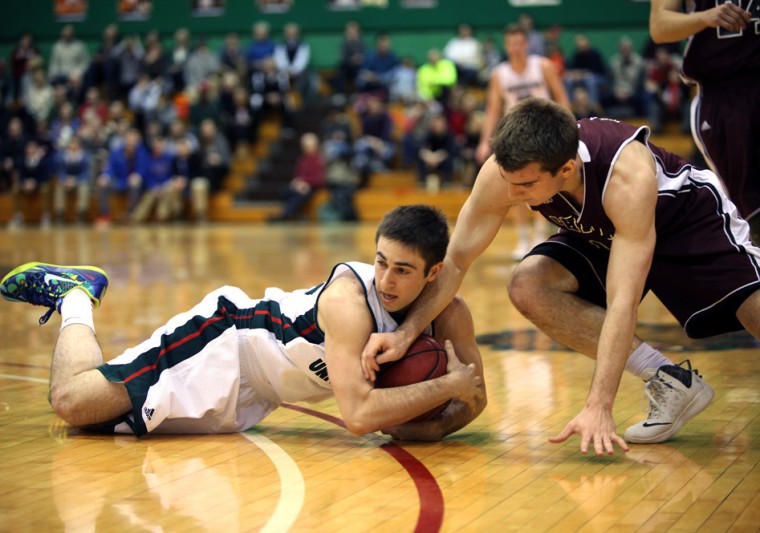 Senior point guard Kent Lacob dives for a loose ball against the University of Chicago in the Bears’ Senior Day victory on Feb. 28. Lacob scored 10 points, doubling his previous career high, and dished out three assists in Wash. U.’s 84-67 victory.

In a first-round matchup, the No. 14 Bears will host unranked DePauw University (19-9) on Thursday night at the Field House. Despite their pedestrian record, the Tigers have made a habit of playing spoiler, upsetting two ranked teams on their way to winning the North Coast Athletic Conference (NCAC) and an automatic bid. After entering the conference tournament with a 9-9 conference record, the Tigers held No. 16 Ohio Wesleyan University to 65 points and stifled No. 22 Wooster College to just 56 points in the conference final.

On paper, DePauw does not possess many of the flashy offensive statistics consistent with conference winners. The team averages 66.8 points per game and broke 80 points only once this season. But these offensive numbers are offset by the Tigers’ tenacious defense, which holds opponents to a paltry 61.2 points per game.

On the court, DePauw excels in creating slow-paced, hotly contested defensive battles. Two of DePauw’s last three wins have both come by four-point margins with 19 total lead changes between them.

Last season, the Red and Green faced off against DePauw and rallied from a halftime deficit to win at home. After trailing 31-28 at halftime, a 20-point second half effort from then-senior guard Alan Aboona lifted Wash. U. to an 11-point victory. 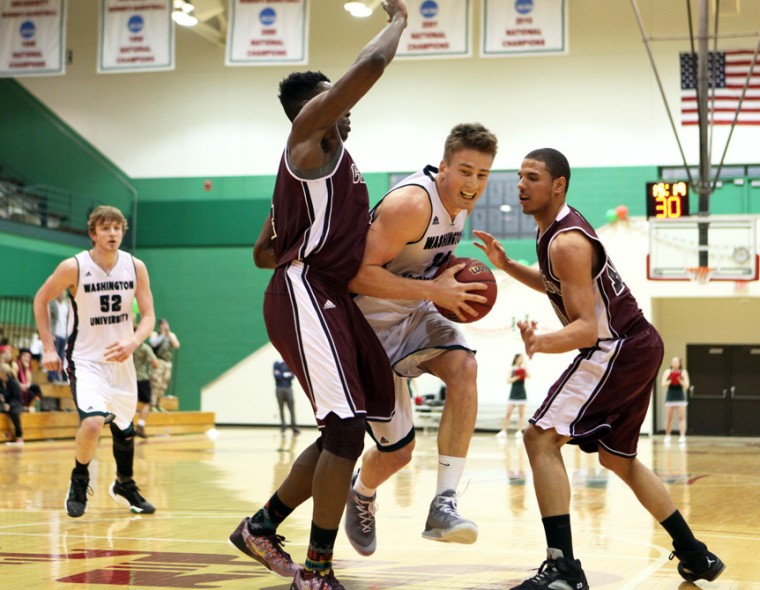 Senior forward Nick Burt drives between two University of Chicago defenders in the second half of the Bears’ Fe. 28 win. With the victory, Wash. U. improved its season record to 20-5 and secured an at-large berth in the 2015 NCAA Division III tournament.

“I’ve known the coach a long time; they’re extremely well coached,” head coach Mark Edwards said. “They play very hard and they’re very fundamentally sound. Last year was a great game when we played with them here, so I expect the same thing.”

If the Bears can maul the Tigers, they will travel to No. 8 Augustana College, which has a first-round bye, for a Saturday showdown.

The senior point guard and first-team All-UAA honoree currently averages 7.5 assists per game, good for fourth in Division III, and the Bears are 12-0 when Fatoki dishes out eight or more assists in a game. During the Bears’ current four-game winning streak, Fatoki has recorded 8.75 assists per game and compiled two double-doubles to lead the Red and Green.

Keep the Tigers out of the bonus

In the NCAC title game against Wooster, DePauw shot 30 of 36 from the charity stripe and was able to dispatch the Fighting Scots in the final minutes by converting 12 of 14 free-throw attempts. Reducing the number of fouls the Bears commit will further limit how much damage the Tigers’ offense can do.

Take advantage of the offensive glass

If the Tigers are able to slow the game down, the Bears will want to generate as many field-goal attempts as possible, and pulling down offensive rebounds will help generate those extra shots needed to stay ahead of DePauw’s methodical scoring approach. While the Red and Green are not the glass-dominating team they were in years past, the team’s plus-5.9 rebounding margin is still better than the neutral margin produced by DePauw.

Senior forward Matt Palucki dribbles down the court in the Bears’ game against Case Western Reserve University on Feb. 1. Wash. U. is 3-0 at home since the Case Western loss.

For the Bears, the NCAA tournament is coming at the perfect time. The offense, which hit its most recent low during a 72-59 loss against Carnegie Mellon University, has since carried the team to a 5-1 record while averaging 88.2 points per game during the stretch. This recent surge cannot be linked to a single player, though, as six different Bears players have scored in double figures in the last six games.

Even though DePauw has a penchant for disrupting potent offenses, Edwards stressed the importance of retaining the team’s identity.

“All the details that you have done well over the course of a season that put you into the tournament, you have to do well,” he said. “So you are focusing on DePauw, but you are also focusing on yourself in order to execute.”