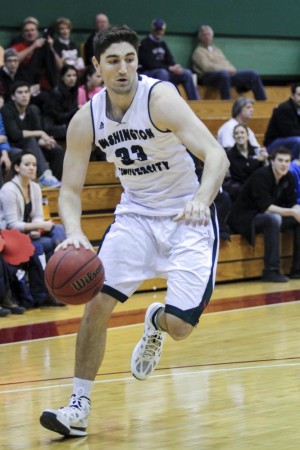 Senior Alan Aboona drives to the basket against New York University on Jan. 19. Aboona is averaging 16.6 points per game and 5.5 assists per game and has scored in double figures in all but three games this season.

For just the second time in program history, the No. 2 Washington University’s men’s basketball team finished the season with an undefeated record in University Athletic Association play. The Bears enter the NCAA Division III tournament on an 18-game winning streak (23-2 overall) with six of those wins coming by four points or fewer. They’ve won close games, they’ve won blowouts, they’ve won with 90-plus points and just 70—but they haven’t yet won anything in the playoffs, and an early exit in the tournament would give a magical regular season a disappointing end. The Bears host the tournament’s first two rounds this weekend; here’s a short summary of the team’s outlook.

Alan Aboona and Chris Klimek—Wash. U.’s top scorers form one of the top inside-outside combinations in the country. Klimek has outscored Aboona by a total of two points this season (16.7 per game for Klimek, 16.6 for Aboona), and each has carried the team to a number of victories. Klimek is the undersized center who bullies his way inside for layup after layup while Aboona is the sweet-shooting point guard who hits 40 percent of his 6.6 three-point attempts per game. Klimek leads the Bears in rebounds and blocked shots, Aboona in assists and free throws made. Their strengths complement each other perfectly, making the two seniors one of the best duos in Division III.

“Part of the reason they work well together is they make good decisions and they anticipate each other very well,” head coach Mark Edwards said. “They read the defense well and they’ve run everything so much, and after four years of playing together, they’ve got each other down.”

Wash. U.’s postseason starts on Friday night against Wilmington College (18-8) in the Field House, where the Bears went 14-0 this year. Wilmington gained notoriety earlier this season for upsetting Division I Miami University (Ohio), but the Fightin’ Quakers have been inconsistent since. They’re on a hot streak, however, having won four straight games, including the Ohio Athletic Conference championship game.

“Wilmington is the best first-round game we have ever played since I’ve been here,” Edwards said. “They are a very strong, senior-oriented team. They have a D1 player and beat Miami of Ohio in a regular-season game, not an exhibition. It will be fun. I’m looking forward to it.”

If the Bears defeat Wilmington, they will play either No. 24 Calvin College (22-5) or No. 23 Wittenberg College (21-5) in the second round. The Bears haven’t played a ranked opponent since Jan. 2.

Stay out of Foul Trouble

While the Bears’ starting five is one of the top units in the country, its bench is rather shallow—no reserve averaged even 15 minutes or four points a game during the regular season. This lack of depth haunted the Red and Green in their two losses this season. In the first defeat, Klimek fouled out while Aboona and junior forward Nick Burt each picked up four fouls; in the second, Burt and senior guard Tim Cooney fouled out while Aboona and Klimek were saddled with foul trouble as well.

“[Foul trouble] is one of those things that does dictate who you can have on the floor, and we’ve been saddled with that a lot this year in the first half,” Edwards said. “But although our bench hasn’t averaged a lot of points, they are averaging quality minutes, and that’s the big thing…so we’re not negligent with the bench. They’re not getting the points because they’re playing behind somebody who is one of the top players in the region.”

With the five starters playing, the Bears can beat any team in the country; if they have to be removed, however, the team’s replacement options won’t have much experience in late-game situations.

Pound the Ball Inside

In each of the Bears’ two losses, they were bested by 14 in points in the paint, an anomaly for a team that normally relies on its size advantage to get easy baskets. That the Red and Green ranked in the top 10 in Division III in rebounding margin (+8.9 per game) speaks to their formidable inside presence; by turning those extra rebounds into layups and dominating the second-chance-points category, they will be doubly hard to defend.

Spread the Ball Around

Wash. U. is second in Division III in assists per game (19.6), trailing only Grinnell College’s system-skewed offense. And the Bears share the ball while still not turning it over an excessive amount; their 1.58 assist-to-turnover ratio ranks fourth in the country. With all five starters all willing passers, a number of the team’s offensive sequences consist of pretty, ping-pong passing culminating in an open layup.

With reporting by Sahil Patel. 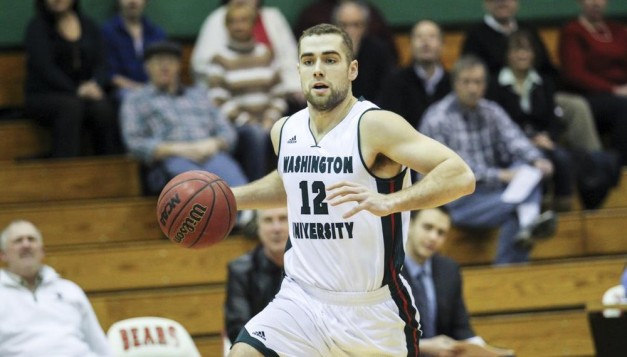 Senior Tim Cooney pushes up the floor against Carnegie Mellon University on Feb. 23. Cooney was named the University Athletic Association Defensive Player of the Year March 4.