Men’s basketball: a look back in the day with Wash. U. and IWU

An annual rivalry will get another go-around this Saturday evening at the Field House as Washington University and Illinois Wesleyan University will square off in the second round of the NCAA Division III men’s national championship tournament. The teams already faced off once this year, back on Dec. 1, with then-No. 10 Wash. U. beating then-No. 7 IWU 67-57, but IWU leads the all-time series by a 19-14 margin. Saturday will mark the sixth time in the four-year careers of the class of 2013 that the two teams will have faced each other. Let’s review the instances of school years past.

In the teams’ most recent showdown in Illinois, Wash. U. was handed its third loss of the fall season by IWU, which never trailed after the game’s opening minute. The Bears were led by then-sophomore Alan Aboona, who scored 15 points—at the time, a career-high—off the bench. 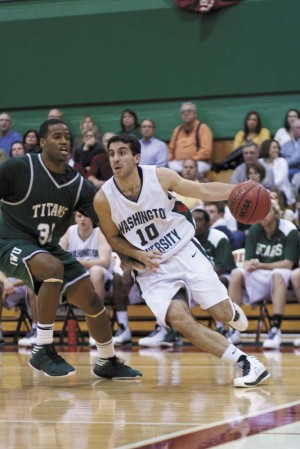 Junior Alan Aboona drives down the baseline past an Illinois Wesleyan University defender during the Washington University men’s basketball team’s 67-57 win over the Titans on Dec. 1, 2012. Aboona scored 15 points in the win, and another strong performance from him will only help the Bears’ chances at advancing past IWU for the first time in tournament history.

Having started the season at a disappointing 4-4, the Bears looked poised to keep the poor start going against IWU as they trailed for most of the contest. But a shocking three-pointer by Aboona tied the game at 68 as regulation expired, and an outstanding overtime from senior Spencer Gay (nine points in the overtime) gave the Bears their signature win of the 2010-11 campaign. Gay ended the game with 21 points, as did junior Dylan Richter.

The game that marked the end of Wash. U.’s championship streak took place in the Field House as top-ranked Wash. U. was stunned in the second round of the NCAA Tournament. Despite the lead never reaching double-digits and senior Aaron Thompson’s 16 second-half points, IWU maintained a lead over the final 18:56 of the contest and picked up an offensive rebound on its own free throw with 15 seconds remaining, short-circuiting Wash. U.’s comeback attempt and ending the Bears’ run at a third straight title.

In their third game of the season following their second national title, the Bears used some strong shooting (54 percent, including 62.5 percent in the first half) to maintain their season-opening winning streak. Thompson led the way with 31 points for Wash. U.