Senior Ben Hoener drives into the lane in the second half of the victory. Hoener scored 17 points in the game.

With a 10-1 record and top-five ranking to its name, the Washington University men’s basketball team was riding high into Illinois on Jan. 5 for its University Athletic Association opener against the University of Chicago. But the Bears endured a humbling defeat, scoring a season-low 60 points and losing by eight.

Wash. U. dropped two of its next four games, including a five-point home loss to Brandeis University marred by 15 missed free throws. With a 2-3 record in conference play, the Bears’ chances of winning the UAA looked slim.

“We lost to Chicago the first game of the [conference] season, and that put us in a real hole,” junior forward Chris Klimek said.

On Saturday, the No. 22 Bears fully righted the ship with their eighth win in nine games, cruising past Chicago for a 72-54 home win to force a three-way tie for the UAA title and earn an automatic berth to the postseason tournament.

The Bears finished the regular season 20-5 and 10-4 in conference but relied on a little help from Emory University to secure their tournament spot. No. 13 University of Rochester, at one point ranked first nationally, dropped three of its final four games, including a 72-54 loss to Emory on Saturday to fall into a tie with Wash. U. and Emory.

Wash. U. receives the UAA’s automatic bid to the NCAA tournament after going 3-1 head-to-head against Emory and Rochester. This marks the Bears’ fourth UAA title in the last five years and comes just two years after the team missed the NCAA tournament entirely in 2011.

“If you would have told me we’d be sitting here as conference champions right now after we were 2-3 and [lost to Brandeis], I would have been ecstatic like I feel right now,” senior guard Ben Hoener said. “I’m just really proud of everyone—how we stuck together and kept grinding through the season even though a lot of people wrote us off for the conference.”

Determined to complete the turnaround, the Bears opened a 29-18 lead Saturday and never looked back, holding the Maroons to 27.3 percent shooting in the first half and 31.7 percent for the game. Klimek scored 17 points on 5-11 shooting. He shot a perfect 7-7 on free throws, improving upon his 59.6 percent mark from the foul line entering the game.

On Senior Day, the Bears’ graduating players did not disappoint. Center Rob Burnett had 12 points and eight rebounds, and Hoener again provided a spark off the bench, scoring 17 points in 28 minutes.

“He’s playing with a lot of confidence,” head coach Mark Edwards said of Hoener. “He’s playing like he did in high school…and I think Ben is a very talented; he’s so quick—man, he’s quick—and other teams have a difficult time matching up with him.”

Guard Max Needle, the team’s final senior, contributed an offensive rebound and a steal in six minutes of play.

Klimek credited the seniors for driving the team to its strong run late in the season.

“These guys are some of the hardest workers on the team,” he said. “They really set an example day in and day out…when there are lapses in practices, it’s really these guys pulling us together.”

Klimek added that contributions from a number of players on a game-to-game basis have lifted the squad.

“It’s fun to play when you have someone that can step up every night because teams can’t scout you, and that makes you a tough team to beat,” he said.

The Bears have until the upcoming weekend to prepare for their first-round postseason game. The bracket will be released Monday at 11:30 a.m. Wash. U. is in good position to host at least one round, which would be a boost based on their 10-1 home record.

However, the Bears might enter postseason play without junior guard Kevin Bischoff, who has sat out the last two games with a hand injury. Bischoff was averaging 4.0 points in 13.4 minutes per game before the injury, but sophomore guard David Fatoki has averaged five points per game in Bischoff’s absence.

Edwards said the team must build off its conference performance to have success in the tournament, beginning with the first round on Saturday.

“The UAA is a tough conference—it’s one of the best in the country,” Edwards said. “We have to utilize that experience.” 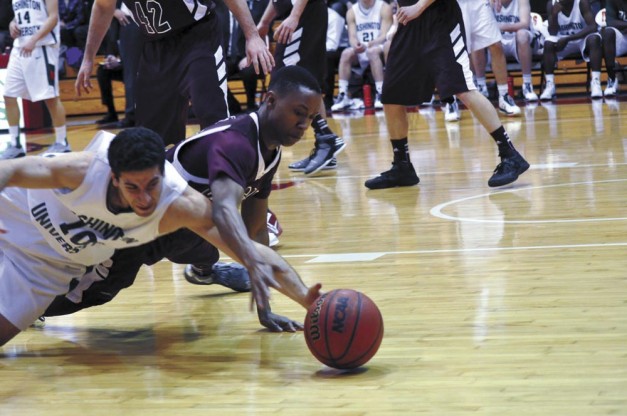 Junior Alan Aboona dives for a loose ball in the second half of Washington University’s 72-54 win over the University of Chicago. Aboona added 10 points as the Bears clinced a berth in the NCAA tournament.