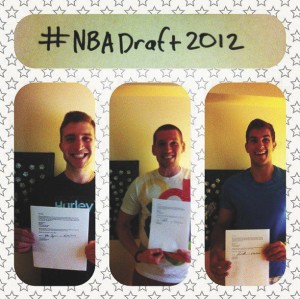 Senior men’s basketball guard Dylan Richter won conference player of the year, led his team to the NCAA tournament, suited up for a postseason All-Star game and earned All-America honors. What’s the logical next step for a decorated college player whose four years on campus are coming to a close? The NBA, of course.

Richter and his fellow senior teammates, center Alex Toth and guard Jake Seymour, filed registration forms for the 2012 NBA draft, declaring their eligibility in letters to the league offices in New York City. They are awaiting the arrival of an official draft application in the next several days. Once they sign the application and send it back to the NBA offices, they will have officially declared for the draft, which takes place on Thursday, June 28.

“While it is highly unlikely and pretty much impossible that anyone in our position would ever get picked, you can still enter all you want,” Seymour said. “So we thought it would be kind of a fun idea to do it all ourselves and see what we can make of it and see if people would support us in a joking way. It’ll be interesting to see what the process is and how far we actually get in it.”

Although a prospect being drafted out of Division III is a rare occurrence, it has happened before. A notable former Division III-turned-NBA-player is Terry Porter, who averaged 12.2 points-per-game in a 17-year NBA career out of the University of Wisconsin-Stevens Point and went on to have short head coaching stints with the Milwaukee Bucks and Phoenix Suns.

Augsburg College product Devean George is another Division III success story. He averaged 5.6 points-per-game in 11 NBA seasons, including three championships years with the Los Angeles Lakers from 2000 to 2002.

Richter, Toth and Seymour are not expecting to get anywhere nearly as far as Porter or George, only to have fun watching the process unfold.

“Basically we did our research—and we’re all business majors, so we’ve taken statistics—and we found a correlation [that]a large majority of people who declare for the draft end up being extremely successful,” Richter joked. “There’s a lot of factors that go into that. We’d imagine basketball skill, among the other things, but we’re not quite sure, so we’re hoping on just the declaration of eligibility being a key factor to success.”

“We just want something to show our kids one day—that we declared for the NBA draft in 2012,” Seymour said.

Channeling his inner Chad Ford or Jay Bilas, Seymour offered some analysis for where he and his teammates would come off the board.

He predicted early second round for Richter, whose game “is pretty NBA-esque.”

For himself and Toth, he sees mid-second round as the probable landing spot.

“I’m not sure how many NBA teams are looking for 6’6” centers, but Alex is a like a Charles Barkley-type—really physical and plays with a lot of energy,” Seymour said.

Seymour played sparingly during his four years at Wash. U., averaging 0.9 points-per-game­—but the numbers don’t have him down.

“Even though I didn’t get to show it much during my career, my game is pretty NBA-translatable as well,” Seymour said.

As for their dream franchises, Toth asserted in a draft video sent alongside the players’ letters that he wants to play for the Chicago Bulls. Seymour is hoping for the Celtics, and Richter does not have a preference.

Richter will be in St. Louis for the draft and hopes to host a viewing party with Seymour and their loyal supporters. Toth will be vacationing with friends in Europe.

“We’ll keep our fingers crossed—doubt we’ll hear our names, but we’ll see what happens,” Richter said. “We all have some alternatives if this doesn’t work out, though.”