Bears fall to Chicago in finale for Class of 2011 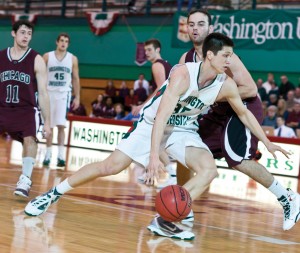 Senior Spencer Gay drives to the basket in his final game in uniform for the Washington University Bears. Gay finished the game with 14 points and scored in double figures in 23 of 25 games this season.

The Washington University men’s basketball team ended its season with a 74-67 loss to the University of Chicago.

Before Saturday’s contest at the Field House, the team honored its four seniors: Spencer Gay, Isaiah Honick, Caleb Knepper and Brett Sapp. Knepper also won the Pearce Award, which is given to a departing player for overall dedication to the team.

“Caleb’s attitude has been tremendous for all four years he has been at Wash. U.,” head coach Mark Edwards said. “This year, he came off the bench as a senior and an offensive threat, and it just worked better for us that way. He not only accepted it but relished in his role and provided good leadership for our team when we needed it.”

Because of poor shooting early in the game, the Bears trailed by five or more points for the majority of the first half.

“We made some mistakes early, couldn’t get the ball to go in, and then it was catch-up after that,” Edwards said.

With 12:59 left in the period, sophomore Ben Hoener pushed the ball from outside the arc to junior captain Dylan Richter for an electrifying alley-oop, making the score 15-7. However, the Maroons continued to fire and drain shots from all over the court.

Toward the end of the first half, the Bears narrowed Chicago’s advantage. A layup from freshman Tim Cooney and a jumper from sophomore Max Needle cut the lead to 31-27 by halftime. Hoener had five points, six assists and five rebounds in the first half, while Gay led the Bears with eight points. Gay ended the game with 14 points and 10 rebounds.

Hoener drained a jump shot to start the second half and bring the Bears to within three points; however, Chicago responded with five unanswered points and grew the lead to 15 with 12:28 left.

The Bears fought back with a 16-6 run over the next seven minutes. Cooney scored 10 points during that span, but Wash. U. came only within five points. The Maroons drained three straight baskets with 3:40 remaining to lead by 12.

“We had our moments, but we just couldn’t get our game on track, and ultimately we just didn’t have enough in us,” Edwards said.

Hoener recorded his first career double-double, with 15 points and 10 assists, while Cooney tied his career-high of 19 points.

“Everybody had their moments,” Edwards said. “It was one of their games when we were trying to get everyone in sync, and we just came up short today.”

The team members were disappointed in the way they finished the season but remained positive, especially about the future.

“It’s not the way we wanted to end the season, but we are not defining our whole season by that game,” Richter said. “We went through a lot, had some great times and are going to remember our seniors.”

“If a few things had gone a different way, [the season] would be completely different,” Hoener said. “We had a few young guys play and gain valuable experience, so hopefully looking to next year we have a lot of people with good experience.”