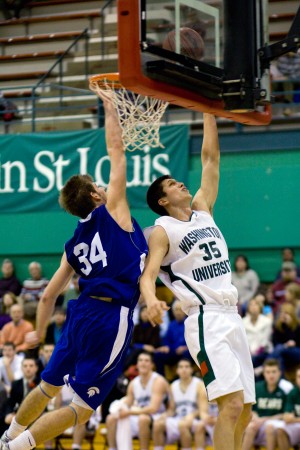 Senior Spencer Gay gets past a Case Western Reserve University defender for a layup. Gay scored 22 points and blocked four shots in the men’s 80-65 victory on Sunday.

“We have a pretty physical team, and both teams tried to be physical back at us. They found out that we can handle it, and that made a difference,” head coach Mark Edwards said. “Our team is getting its pieces together; we just have to keep winning.”

Four Bears scored in double figures against Case Western Reserve on Sunday to power the team to an 80-65 victory. Senior Spencer Gay led the charge with 22 points and four blocks.

“We were struggling to work together and find our confidence, [but] it’s really coming along the last couple of games,” sophomore Robert Burnett said. “We’ve re-focused after a rough streak, and now we’re going after it. Our offense is coming along; it’s getting a lot smoother; we’re starting to find open men.”

The Spartans took an early 6-4 lead after sophomore forward Austin Fowler’s two three-pointers. Fowler, the leading scorer for Case Western, recorded 18 points but was limited for much of the game.

“We had a defensive game plan, and I think that our kids followed it very well,” Edwards said. “[Fowler] got quick shots when we weren’t ready for it, but after that, we tried to be ready for it.”

Gay’s three-point play with 16:28 left in the half gave the Bears a 7-6 lead, which they did not surrender.

After entering halftime with a 42-29 advantage, Wash. U. continued to push its lead. Two free throws from junior Alex Toth gave the Bears a 68-42 advantage with 5:56 remaining in regulation, their biggest lead of the game.

“I thought that [defense] was the key to the game,” Edwards said. “[Case] is a good offensive team, and I thought our kids competed very hard and had them taking bad shots…[and] turning the ball over.”

On Friday night against Carnegie Mellon, Burnett made his first career start in place of an injured Toth. Burnett recorded a double-double, picking up 12 points and 13 rebounds in the 70-62 Wash. U. victory.

“It was a good night. Coach gave me a chance to start, and I took advantage of it because I knew that it was my time,” Burnett said. “I was glad that I was able to come out and put up those numbers.”

Gay’s layup with 16:41 left in the first half gave the Red and Green a 7-2 lead. Gay led the offense with 16 points, while junior Dylan Richter scored 14.

Senior Caleb Knepper hit back-to-back three-pointers off the bench to reclaim the lead for the Bears, who led at the break, 30-24. They opened the second half with a 9-0 run to put some distance between them and the Tartans.

“[Coming out of halftime], we were determined to knock them out flat,” Gay said. “The positive energy was there; we got big rebounds, and we got big stops.”

The Tartans slowly chipped away at the 15-point advantage, getting within two points of the Red and Green at the 4:54 mark.

With 54 seconds left, Richter found Burnett uncontested under the basket, setting up for a victory-sealing layup and a five-point advantage.

With these two wins, Wash. U. moves into third place in the University Athletic Association standings (10-8, 4-3 UAA). Next, the Bears will hit the road for four crucial games, starting on Friday against CMU and continuing with Case Western Reserve on Sunday.

“We’ve got one goal at the end of the season, and that’s to keep playing. We know that we’re up against the ropes, and we’ve got to keep fighting,” Burnett said. “Every day, we come to practice, we fight hard and then we get ready for battle on Fridays and Sundays.”

Tip-off against Carnegie Mellon in Pittsburgh is at 8 p.m. Eastern time.