Men’s basketball: After long string of close calls, a rout of CMU 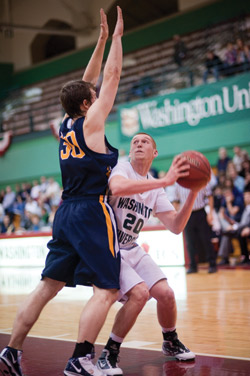 Coming off of four straight games decided by five or fewer points, the Washington University men’s basketball team finally got some room to breathe. The Bears handed Carnegie Mellon University their 12th loss of the season with an 81-60 rout on Sunday in Pittsburgh.

For most of the first half, the game was tight, but in the last 4 minutes and 54 seconds, the Bears erupted for a 12-3 scoring run to enter the break with a 43-29 lead.

“We started running a little more, we got the wings ahead of the guards, and that really helped us out,” graduate student Sean Wallis said. “We were able to make some shots and finish some layups around the basket, so that put it out of reach after we picked up the tempo of the game.”

Wallis recorded a team-high 17 points in the rout.

“I think Sean brings the best out of the other players,” head coach Mark Edwards said. “He orchestrates the team. It’s a great gift that he has. I couldn’t be happier with the way that he’s playing in his fifth year.”

In the second half, the Tartans could not get within 14 points, as the Bears continued pouring onto the lead.

“I think they have a tough time keeping up with us and being able to keep track of all the stuff that we ran, and it showed,” Wallis said.

Gay, who was recently promoted to the starting lineup, has been rewarded for his elevated performance with increased playing time.

“It’s a lot easier to be ready to play as soon as I step out on the court as a starter,” Gay said. “I feel like it brings defensive intensity to get boards.”

Despite this considerable victory, Edwards knows that teams are always especially ready to face the notoriously talented Bears.

“It’s important to realize  that when we play teams this year, they are looking at us as an opportunity to establish themselves, to knock off the two-time defending champion, or whatever,” Edwards said. “We get everybody’s best game, and that’s kind of fun. We enjoy that.”

Sunday’s game was the second of a four-game road trip for the Bears. On Friday, the Red and Green bested Case Western Reserve University 66-61, led by Gay’s 16-point performance. Gay made three out of four free throws down the stretch to preserve the win. Next weekend, the Bears will travel to the University of Rochester and Emory University before returning home on Feb. 5 to face Rochester again.

“These two games next week are really big for us,” Wallis said. “If we can sneak out of next week with two more wins, that would really put us in a good position trying to win this conference.”