Football team searches for its first ever NCAA playoff victory

On Saturday, Nov. 19, the Washington University football team will travel to Oshkosh, Wis., to take on the University of Wisconsin-Oshkosh in the first round of the NCAA playoffs. It will be just the program’s third appearance in the postseason, and its first since 2013.

The Bears secured a playoff berth last weekend with a victory over the University of Chicago. With the win, Wash. U. claimed the Southern Athletic Association conference title, and the automatic postseason bid that comes along with it. Saturday’s game presents a unique opportunity for the Bears to claim the program’s first ever NCAA playoff victory.

How they got here

Unlike the 2013 playoff team, which was propelled by defensive standouts like 2014 graduate Nelson Nwumeh, who was a finalist for national small college player of the year, the 2016 Bears have been all about offense. Wash. U. scored an average of 39 points per game over the course of the season, eclipsing 30 in all but one game.

Much of the damage has been through the air. In his senior season, quarterback J.J Tomlin has played his way into the Wash. U. record books. He owns or shares every single major program passing record, and his 3,539 yards through the air this season represent both a school record and the fifth-best total in NCAA Division III. Also key to the Bears’ offense is senior wide receiver Kevin Hammarlund, who set a school record this season with 1,249 receiving yards. After three years as a backup quarterback, senior Matt Page has been converted into a standout tight end this season and has become an important weapon for the Bears, reeling in 62 catches for 866 yards and 11 touchdowns. In the running game, senior Austin Smestad has provided some key yardage, and leads the team with 14 all-purpose touchdowns.

On the other side of the ball, the defense has at times struggled to stop opposing offenses. The Bears allowed 503.6 yards per game, evenly split between rush yards allowed and pass yards allowed. Wash. U. opponents are averaging 30.9 points per game. Despite these difficulties, the Bears defense has had success in forcing turnovers. The Bears secondary amassed 20 interceptions this season, tied for the seventh best total in the nation. Sophomores Jake Coon and Ben Marcus lead the team with 4 each.

One interesting area to watch for is on punting. The Bears are ranked third in the nation in net punting and have only allowed 15 return yards all season.

After dropping an early home game to Centre College, the Bears went undefeated in the SAA for the rest of the season, with their only loss coming against No. 25 Case Western Reserve University. Wash. U. ended the season with two straight victories in must-win games against Hendrix College and the University of Chicago to post an 8-2 record. 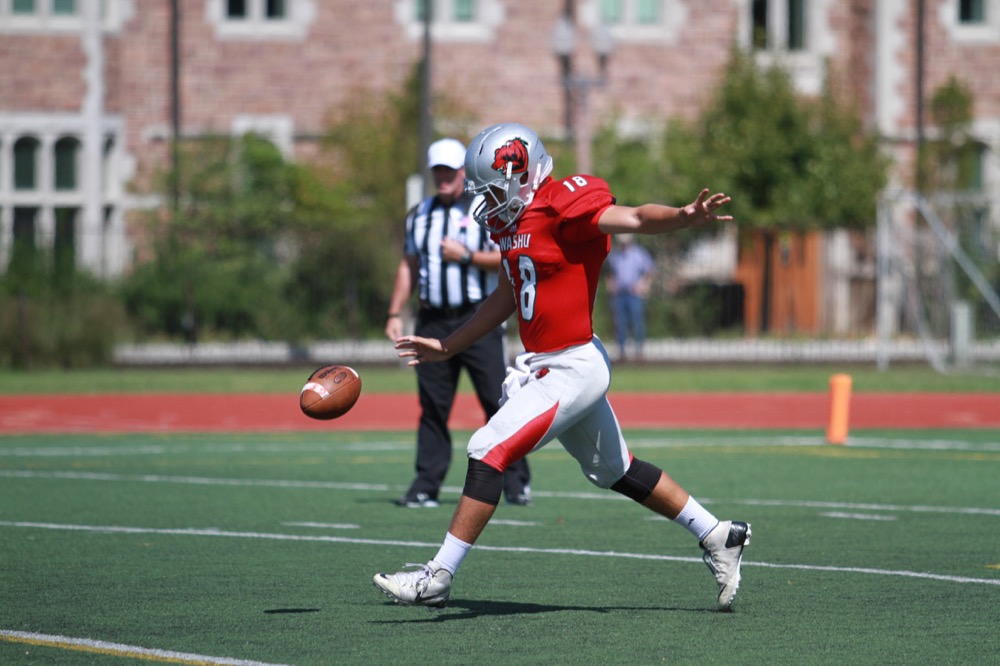 Freshman punter Johnny Davidson kicks off in the Bears’s game against Centre. The Bears will travel to UW-Oshkosh for their first NCAA playoff game of the season.

The Bears find themselves up against a significant challenge in the form of the University of Wisconsin-Oshkosh. The Titans enters the tournament as the fourth ranked team in the nation, posting a 9-1 record in the regular season.

The Titans offense has been explosive at times this season, scoring 68 points on Finlandia University and 77 on Morthland College. They are led by quarterback Brett Kasper, who has been steady this season, throwing for 1,797 yards with a 62.4 percent completion rate. In the running game, the Titans do not boast any backs who have put up eye-popping numbers this season—instead, they have depth. Eight different Titans have amassed at least 100 yards on the ground this year, and nine different players have rushed for touchdowns.

The matchup will ultimately be determined by how the Bears’ offense can do against Oshkosh’s defense. The Titans rank eighth in the nation in scoring defense, only giving up an average of 12 points a game. The most points they have allowed this season was 29, in a 53-29 victory over University of Wisconsin-La Crosse. Considering the Bears generally give up around 30 points, they will probably need to score more than 29 to win.

In its search for an historic playoff win, Wash. U. finds itself in a matchup between a great defense and a great offense. If Tomlin and the Bears can score points the way they did during the regular season against one of the best defenses in the country, they will have a good chance to advance to the second round for the first time in school history.