In the Washington University football team’s final game of the season, senior tailback Cody Ratermann rushed for 171 yards on 30 carried, both career highs, to lift the Bears to a comfortable 37-23 victory over Southern Athletic Association (SAA) opponent University of Chicago.

With the win, the Bears improve to 6-4 overall and 5-3 in their inaugural SAA year, good enough for a fourth-place tie with Chicago in the nine-team league. The Bears finished the season second in the SAA in total yards per game and first in passing yards per game by nearly a 90-yard margin. 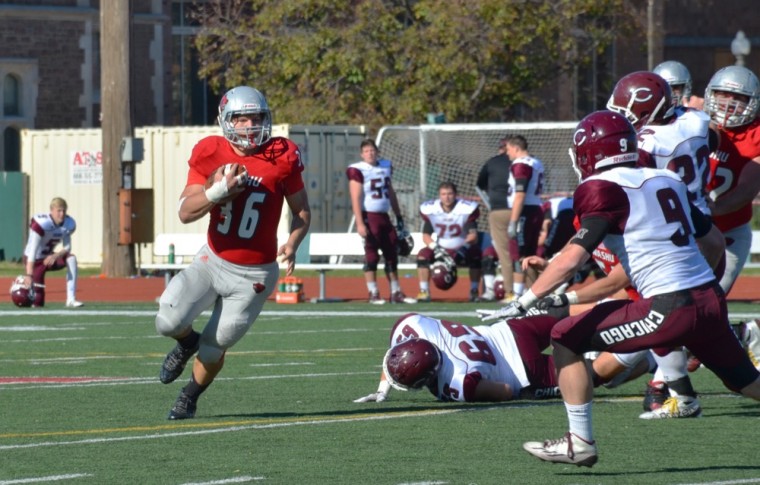 Running back Cody Ratermann rushes for a season-high 171 yards in the Bears’ final home game of the season against the University of Chicago. The Bears won 37-23 to share part of the UAA title and bring home the Founders Cup.

Those numbers were buoyed by another routine day for the Bears’ aerial attack. Junior quarterback J.J. Tomlin contributed 305 yards through the air, including three touchdowns and one interception. Junior wideout Kevin Hammarlund, reeled in 88 of those yards using nine catches to finish the season with a SAA-leading 95.7 yards-per-game. Because Tomlin’s usual short yardage receiver, junior Hank Childs, did not play, the quarterback looked for wideout Matt McCareins, connecting with the senior for five catches and 44 yards. With the Bears nursing an early 7-6 lead nine minutes into the game, Tomlin found McCareins on a short hook route in the front right corner of the end zone. Tomlin’s 27th touchdown strike of the year matched the single season record set by Thor Larsen (‘97) 20 years ago in 1995. Along with two more touchdown tosses against Chicago to senior tight end Mitch McMahon, Tomlin capped off the most statistically successful quarterback season in school history. His totals of 29 touchdowns, 289 completions, 66.4 percent completion percentage and 3,363 yards thrown all set single-season school records. With 4,960 yards of total offense, the 2015 Bears also shattered the 3,932 mark set by the 1996 squad.

Against Chicago, the Bears were outgained in passing yards for only the second time all season, but backed up their effort with a season-high 279 yards on the ground. In addition to Ratermann’s career-high mark, junior tailback Austin Smestad added 11 carries for 78 yards.

Ratermann and the rest of the Bears offense were supported by a defense that took a bend-but-don’t-break approach, allowing 507 yards of total offense but limiting the Maroons to just two touchdowns and three field goals. In the process, senior defensive backs Dylan Petre and Quincy Marting and freshman defensive back Grant Owen came up with three interceptions to thwart Chicago’s offense. Marting and Petre finished the season with a team-high four interceptions each. Against Chicago, Marting also added a career high 16 tackles, 13 of them solo in his final game in uniform.