In front of over 2,000 fans, the most at Francis Field since last October, the Washington University football team allowed a season-low 181 yards of total offense on its way to dominating Rhodes College by a score of 37-7. With the win, the Bears have now won 13 of their last 14 home games.

Junior Hank Childs runs downfield in the Bears’ game against Rhodes College on Saturday night. Childs had five receptions for 56 yards as the Bears won 37-7.

After a disappointing 319 yards of offense last week at Berry College, and perhaps recognizing the stoutness of the Rhodes defense, Wash. U.’s play-calling started out relatively conservatively, focusing on runs and short passes in a couple of early marches down the field.

“We’re just getting back to the basic things, just hitting the short screes and bubbles and running the ball,” junior quarterback J.J. Tomlin said. “That is exactly what we did today. We don’t have to get it all in one shot; we can still operate as an offense while we run the ball which we obviously did today.”

A 47-yard field goal by senior kicker Alex Hallwachs capped off a 49-yard drive on the Bears’ second possession, which was by a nine-yard run on 4th-and-1 on their own 41-yard line.

Later in the first quarter, freshman Jamar McDonald busted through the left side of the line for a 27-yard touchdown. By the end of the quarter Wash. U. had 67 yards on the ground.

“I think our backs spiced it up a little bit,” head coach Larry Kindbom said. “You could see how hard they were running.”

Another Hallwach field goal, this time from 38-yards, and a 21-yard screen pass to senior running back Cody Ratermann, gave Wash. U. a commanding opening 20-0 lead. 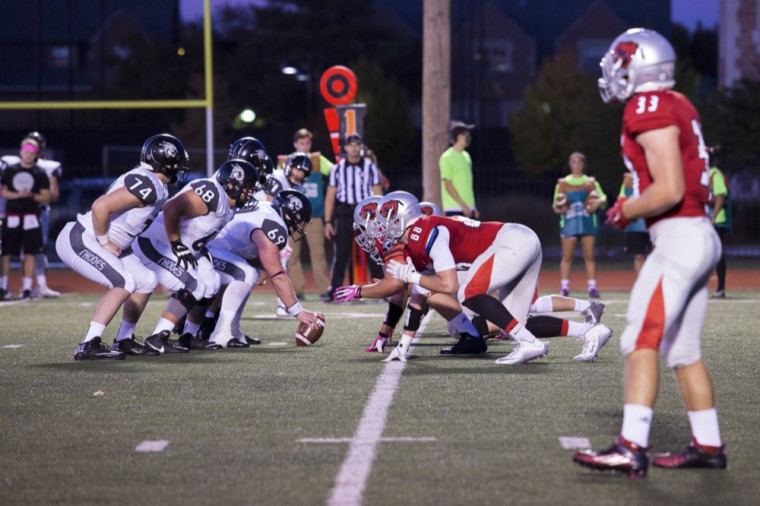 The Wash. U. Bears offensive line faces off against Rhodes College in the game Saturday night. The Bears won 37-7 after quarterback J.J. Tomlin threw three touchdowns for 337 yards.

What really broke the game open was an interception by freshman linebacker Jake Coon, their second of the game. Coon returned his pick 26 yards to the Rhodes 11-yard line, setting the Bears offense up with a short field.

Tomlin took advantage, rifling 14-yard bullet to junior wide receiver Kevin Hammarlund at the left edge of the end zone. Hallwachs’ ensuing extra point was the 70th of his career, breaking the 19-year-old school record set by Carl Binggeli (’96). The score gave the Bears a 27-0 lead going into halftime.

“Anytime I get a matchup one-on-one with Kevin Hammarlund, it is something I want to take,” Tomlin said. “Kevin ran a great route and made a great catch at the end of it. He makes me look a little bit better that what I actually am.”

Another touchdown, this time an acrobatic one-handed catch in the back of the end zone by senior tight end Max Elliott, gave Wash. U. a 34-0 lead three minutes into the half. The Lynx’s lone touchdown came with 11:03 left in the fourth.

At the season’s midpoint, the Bears appear impossible to beat a home. In three home games, they have averaged 41 points per game and 395 yards per game through the air.

On the road is a different story. The Bears have lost eight straight on the road, a streak that stretches back to November 2013.

“It’s tough to win on the road in college football, but to be a good football team you have to do that,” he said. “I think just really a matter of being able to come out and play consistently. I don’t care where we are; it’s still a 100-yard field, the goal posts are still 10 feet.”

The Bears have an opportunity to overcome their road demons next Saturday when they travel to Tennessee to take on Sewanee: The University of the South. The Tigers will enter the contest 1-4 and losers of four straight.

“I think there is a possibility that when we travel, we tend to lose focus,” Tomlin said. “So that just means when we travel to Sewanee we have to be even more sharp in practice and more attentive to the smaller things so we can come out on Saturday and play.”

With additional reporting by Aaron Brezel.