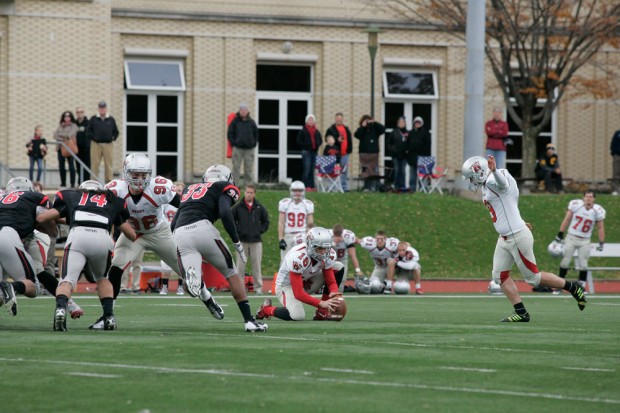 Sophomore kicker Alex Hallwachs makes a 45-yard field goal attempt with less than 15 seconds left in the fourth quarter on Saturday afternoon against Carnegie Mellon. The Washington University football team won 9-6 and improved its record to 6-2.

With 15 seconds left in the fourth quarter against Carnegie Mellon University in Pittsburgh Saturday, the Washington University football team’s playoff hopes lay on the right foot of kicker Alex Hallwachs. The sophomore’s 45-yard kick hit the left post, and the ball bounced right and through the uprights, sending the Bears’ sideline into pandemonium and resulting in a 9-7 victory.

For the past three games, the Red and Green have been faced with must-score situations late in the fourth quarter. Despite being plagued by penalties, turnovers and mental mistakes, the Bears’ resiliency has translated into crucial wins as Wash. U. improved its record to 6-2 and extended its winning streak to five. Beating the conference-rival Tartans was even sweeter, putting the Bears in a first-place tie with Case Western Reserve University in the University Athletic Association standings.

“This team knows that the game is never over until that clock runs out,” head coach Larry Kindbom said. “If you don’t believe in that, it can be hard to win close games. But we’ve been getting it done consistently, and it really shows our team’s strength and chemistry. We’re never going to give up, and we’re determined to fight until the end.”

That determination resonated with Hallwachs on the last kick as he looked for redemption after missing an extra-point kick early in the first quarter. According to senior defensive back Tate Byers, the team remained confident that Hallwachs could save the game.

“I just tried to calm him down after that extra point, and I think he was able to put that aside for the most part,” Byers said. “He’s usually ready for any big situation, and I think he really showed us his ability to bounce back.”

While special teams sealed the deal, the Bears’ aggressive defense kept Carnegie out of the end zone for most of the game. While the Tartans managed to score one touchdown on a corner route, the defense remained unfazed and adjusted with more pressure off the edge and better tackling.

“Our scouts did a good job of simulating Carnegie’s offense, so we were prepared for the most part,” Byers said. “We knew they could go deep, and we were able to take that away from them. We managed to get a lot more pressure as the game went on, and that really kept Carnegie’s quarterback uncomfortable, which made them one-dimensional with their running attack.”

Limiting the Tartans to 85 yards through the air and 123 on the ground, the Red and Green also used frequent blitzes and forced Carnegie to fail on nine of its 13 third-down attempts and turn the ball over three times—one interception and two fumbles. Kindbom credited the performance to the discipline of the unit and defensive coordinator Jim Ryan’s coaching.

“Everybody is taking care of their responsibilities,” Kindbom said. “It’s hard to do that with great athletes, but our guys are disciplined, and Coach Ryan did a good job with the ‘X’s and ‘O’s. As long as our defense plays in their zone, we always have a chance to win.”

Offensively, the Red and Green continued to struggle putting points on the board, mustering only one touchdown for the second straight game. Committing five penalties for 53 yards and turning the ball over with two interception and two fumbles, Wash. U. struggled to move the chains for most of the game, converting only a third of its third-down attempts. While carelessness and miscommunication could be explanations, injuries have also been an issue. The Bears have lost several key players, including wide receiver Tim Bartholomew and running back Zach Lonneman, both juniors.

“You’ve got to give credit to their defense,” senior quarterback Eric Daginella, who completed 17 of his 34 passes for 123 yards, said. “They played us hard, and we really had trouble finishing drives. We had some new guys who have had to step up, and they’ve done well, but we still have to work on communicating and drills.”

Though the offense may be far from perfect, it certainly demonstrated clutch play. With less than a minute left in the fourth, Daginella converted a fourth-down-and-11 pass to freshman wide receiver Hank Childs, putting the team in position for a game-winning field goal.

“What matters is that we’re winning games and getting closer to our goal of winning the UAA and clinching the playoffs,” Daginella said. “We’ve got more work to do, and we’re excited about this team.”