Taken from the park: Aly Wayne’s improbable run to the top

In October of 2015, then-sophomore Aly Wayne wasn’t on the Washington University map—literally. Instead, she was minding her own business, going for a routine morning run in Forest Park.

On Nov. 21, 2015, Wayne, not a member of the Washington University women’s cross-country team just a month earlier, was the second-fastest Bear and the 47th fastest Division III runner at the NCAA Championships in Wisconsin, far from the fields of St. Louis. 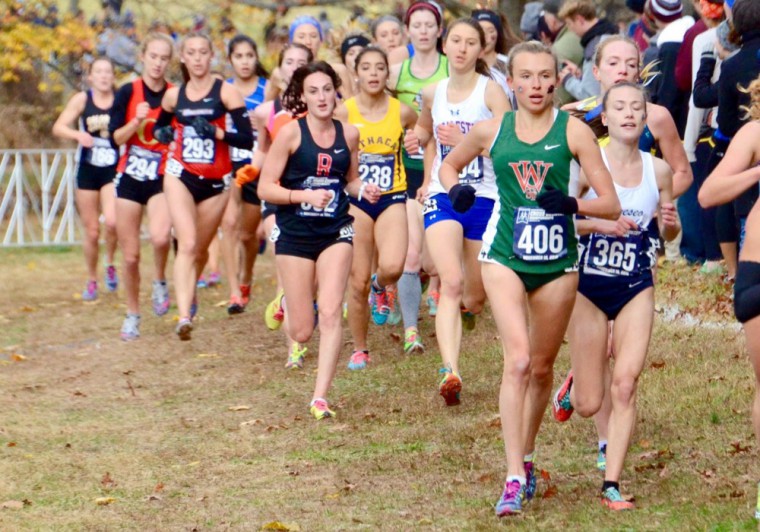 So, how exactly did the remarkable turn of events come to be? Well, it turns out that Wayne, now a junior, was being scouted.

“[Head coach Jeff Stiles] would see me in Forest Park a lot in the mornings, and I was just out there because I liked running,” Wayne said. “Coach Stiles emailed me…and was like, ‘Hey Aly, I see you all the time. I know we talked a little bit last year, but I see you really love running, and I want to talk to you about potentially joining the team.’ It was pretty out of the blue. It was really strange getting an email, like, ‘Wait, I know who this man is.’ But it’s cool—it’s like, taken from the park.”

It turns out Wayne and Stiles had had an earlier correspondence. A year earlier, Wayne had attended the team’s open tryouts as a freshman and had contacted Stiles beforehand about her interest in running at Wash. U. After Wayne failed to make the team that fall, she and Stiles went their separate ways. Luckily for both parties and the cross-country program, the two still recognized each other during Wayne’s sophomore year.

“I would see her out running all the time,” Stiles said. “We would be going out for our run at 6:30, and she’d be coming back from a run, and I could tell that she was running fast. And I’d start seeing her—every week I saw her like four times a week when we were out early in the morning—and she clearly was running quick and had improved a lot. And so, eventually, I’m like, ‘Oh my gosh!’”

Even so, with much on her plate—involvement in a sorority, a chemistry fraternity and the Writing Center—Wayne’s priorities had shifted from when she tried out for the team freshman year. Now, she simply enjoyed running for pleasure.

“I just kind of ran on my own all my freshman year and didn’t race for a really long time, which I think was actually good for me because in high school, I’d just been so stressed out and bummed out,” Wayne said. “I just needed to just run and enjoy it.”

This time, questioning whether she actually wanted to take on the commitment of being on the cross-country team, Wayne had a decision to make. She opted to go back to her roots and had another conversation with her dad, who had encouraged her to try out initially.

“I think my dad is the one who really helps me make a lot of these decisions, and he was like, ‘You’re never going to get the opportunity to run for a team after college,’” Wayne said. “ So I was like, ‘Yeah, I’ll do it.’”

Returning to the competitive scene proved to be immensely gratifying for Wayne, both as an athlete and as an individual. Wayne, a two-sport athlete in high school, had explored the possibility of either playing soccer or running—or both—in college but ended up doing neither at first, in part due to persistent injuries and health issues throughout high school.

“Not only was I running track, but I was also playing on three soccer teams at the same time. And it was that, combined with some issues with restrictive eating, and that put my body out of commission for a while,” Wayne said. “It was really a combination of not fueling my body appropriately while also overtraining, and that led to me having to take a significant amount of time off. Whenever I would try and come back…I would get these little nitpicky injuries…I never could figure out what it was, but it just really bothered me to run.”

These injuries kept Wayne from being able to fully return to the sport until her freshman year of college.

Wayne ultimately chose Wash. U. not because of its athletic programs but because she was looking for a place that would be good for her mental health. Looking for a balance between school and community, her time thus far on the team has been a microcosm of what she was searching for: a happy, stress-free environment. That, in turn, helped to reinvigorate her and enhance her performance.

“It just so happened that the races I ended up running that cross-country season, with the Wash. U. team, were huge breakthroughs for me individually,” Wayne said. “I hadn’t run that fast in years, and it was amazing. And just feeling the energy of the people around me, on the team or on the sidelines, was so different and cool.”

Reenergizing through running has also helped Wayne reevaluate the rest of her life. She’s taken opportunities to simplify academic, extracurricular and social lives that were increasingly becoming more stressful. She deactivated from her sorority, is less active in her chemistry fraternity and pushes herself less hard in the Writing Center.

“There was one day where someone who’s a mentor for me on campus—I just went into her office, and I was like, ‘I can’t do this anymore,’” Wayne said. “And I just totally broke down. But it happens. It was a sign that I needed to reevaluate.”

At the same time, Wayne is still getting the most out of her college experience. She feels rewarded by running for the Bears, especially on a personal level.

“I just like to think on runs. And practice time and running time, for me, are the hours I don’t have to think about school,” Wayne said. “The good feelings you get—the endorphins are so great; they give me energy throughout the day. Workouts and races are times when I’m really stressed; I love running hard because I just get it all out. It’s a way to just release any anger, tension or anything that’s building up.”

Though running by nature is an individual sport, running at Wash. U. has taught Wayne a thing or two about being a good teammate. She frequently invites freshmen runners to her apartment for meals and has learned to run not only for herself, but also for her team.

“Joining the team and not really knowing a lot of what it was about this past year has been a real learning experience, a really positive one, in terms of transitioning my mentality as an individual runner,” Wayne said. “Because even though I was on a team in high school… I didn’t really feel like I was ever a part of it. So, really as a runner, I’ve always seen myself as an individual, but the Wash. U. team here is so focused on team.”

Wayne and the Bears, of course, have performed exceptionally. A year after joining the team on a whim, Wayne was the eighth-fastest runner in the nation at this year’s NCAA Championships, while the Red and Green finished second on the national stage. For Wayne, that’s the result of pushing herself to the best of her ability and letting the results be what they are.

“Cross-country is all about competing and not about time,” Wayne said.