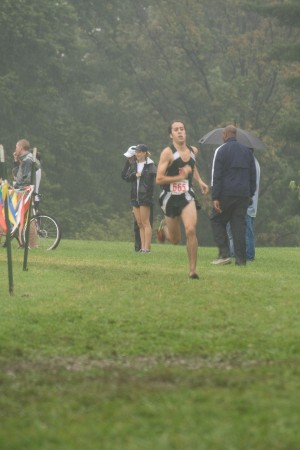 Saturday marked a momentous day the histories of both the Washington University men’s and women’s cross country teams.

“There were really strong performances across the board, which is definitely what contributed to the win for both teams,” freshman Gabby Reuveni said. “What was really phenomenal about both races [on Saturday] was that each individual gave 100 percent effort, making the team success that much more exciting,”

“I didn’t feel great going into the race, so I wasn’t sure how I’d feel in the actual race, if I’d have my legs under me. With 600 meters left, I had the most left at that point, so it worked out,” Burnstein said. “We’ve had a lot of cross country success, especially recently, so it’s an honor to be up there with the greats.”

“Winning UAAs was one of our primary goals coming into the season, and doing so reflects what we’ve accomplished to this point and what we’re capable of accomplishing in the next few weeks,” junior Daniel Rosenbaum said.

On the women’s side, senior Jessica Londreree finished in sixth place with freshman and UAA rookie of the year Sarah Fisher finishing right behind her in seventh place.

“It was definitely one of the most exciting days in Wash. U. [cross country] history,” Phillips said.

What made this victory particularly impressive for the men’s team was the fact that they defeated New York University, a team which was not only ranked ahead of Wash. U. in the U.S. Track & Field and Cross Country Coaches Association poll and took fourth place last year at nationals, but a team that had also won the previous four UAA championships.

“NYU is a great program and the model for excellence in the UAAs,” Spandorfer said.

Similarly, the women earned a special victory by coming in as underdogs and defeating NYU and the University of Chicago, teams they had lost to just two weeks ago at the University of Wisconsin-Oshkosh Brooks Invitational.

Despite the achievements over the weekend, the Bears have little time to rest, as they are just getting started with the postseason. In two weeks, both the men’s and women’s teams will travel to the 2010 NCAA Division III Midwest Regional Championships.

“Our season’s hardly done. We’re just heading back to work now and focusing on what we sought to accomplish in the beginning: to qualify for nationals and then do the best we can at the meet,” Spandorfer said. “We’re getting stronger by the week, and our training has set us up to do pretty cool things.”

The Midwest Regional Championships will be held on Nov. 13 in Credit Island, Ill. The race is set to begin at 11 a.m.

With additional reporting by Kurt Rohrbeck.