Crew fares well at Head of the Charles Regatta 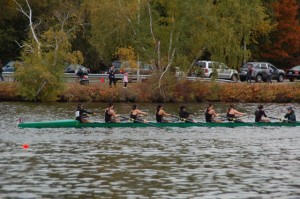 The Washington University women’s rowing team competes in the Head of the Charles Regatta in Boston on Sunday.

In front of thousands of cheering spectators at one of the biggest events in the world of rowing, the Washington University men’s and women’s crew teams placed 21st and 18th, respectively, on the Charles River in Boston this past weekend.

“The Head of the Charles [Regatta] is in a league of its own…the energy and excitement is unmatched by any other race,” said senior David Ingber, men’s coxswain and club president.

The regatta, one of the world’s largest rowing events and the team’s biggest race of the fall, annually draws some of the toughest national and international competition, along with hundreds of thousands of fans.

“Especially for those who haven’t been before, you hear that it’s the biggest regatta in the world…but you’re not really ready for the sight that hits you when you walk up on Sunday, the day of the big races,” men’s co-captain Ryan Bowers said. “It’s really exciting, and the excitement is contagious. It actually takes a special effort of will to calm down and be able to race efficiently once you get out there.”

Finishing in the top half of all teams earned the men’s team an automatic qualifying spot in next year’s regatta. Last year, the team qualified for the automatic bid for the first time in team history.

“Last year, for the first time ever, we made it into the top half, which is vital…and now, the bar was set that high, and luckily, just by a narrow margin, we were able to sneak in and achieve that same goal again,” Ingber said.

In the women’s Collegiate Eights race, Wash. U. finished 18th out of 31, with a time of 17:53.294. With the placement, the Bears narrowly missed getting the automatic bid, but the team was still happy with its results.

“It felt surreal,” women’s co-captain senior Becky Chanis said. “It couldn’t have been anything less than amazing because we were so prepared, we were so ready to go and we were so excited to race that I was happy with any result, as long as we had done our best and I think that…we really gave it our all.”

Unlike the men’s team, the women’s team was competing in the regatta for the first time in two years. After finishing 28th in 2008, the Bears were not selected to compete in last year’s race.

“I’m currently the only female senior on the team, and the only female senior rower, so for me, it was also a bigger deal because this was my last chance to race with Wash. U. at this race,” Chanis said. “I think that my teammates really understood that…and wanted it not just for themselves but for each other as well. This is something that we’ve all been pushing for for over a year because we didn’t get a bid last year.”

The teams will head to Indianapolis this weekend to compete in the Head of the Eagle Regatta, the last race of the fall season.