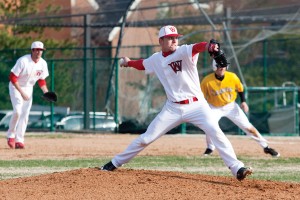 Junior Brandon Rogalski delivers a pitch from the stretch against No. 18 College of St. Scholastica on Monday. Rogalski tossed five innings of two-run ball to record the team’s first victory over a ranked opponent on the season.

Just two weeks into its 2011 season, the Washington University baseball team feels that it has already faced off against, and survived, some of the best talent around.

The Bears have already taken on a Division-I opponent in St. Louis University, played a two-game series against No. 5 University of Wisconsin-Whitewater and, on Monday, split a doubleheader with No. 18 The College of St. Scholastica.

Wash. U. lost the first game 10-5 but rebounded for a narrow 3-2 victory over the Saints in the second.

The win was the first for the Bears against a ranked program under new head coach Steve Duncan.

“All the innings except the last inning of the first game, we were in the game and were competing with [St. Scholastica],” junior Brandon Rogalski said. “They’re a top-20 team, so we feel like we can compete with anybody out there.”

After surrendering the early lead, Merzel settled down, giving up just one more earned run in his five innings pitched.

Wash. U. added three runs of its own in the bottom of the inning, on Rogalski’s RBI-single and senior Matt Bayer’s two-out two-RBI double.

“Just seeing the way their pitchers threw…we knew that we could come back. It was good to [score those runs] in the first inning, and we wish we could’ve gotten more runs in that game, in general,” Bayer said. “It seemed like every time that we would come back a little bit, they would get another run, and that’s because they’re a good team.”

The two teams battled back-and-forth until the seventh, where the Saints, leading 7-5, put the game out of reach with three more runs.

Rogalski started the second game of the doubleheader and picked up a victory behind five innings of work. He gave up six hits and walked three batters, but limited St. Scholastica to just one earned run.

“[After my last start], I knew I needed to work on throwing first-pitch strikes, and I feel like I accomplished that,” Rogalski said. “I felt like I had a lot more control this game, and I made a bunch of clutch pitches when it was [a] full-count, bases loaded [situation]. That really turned out well for us.”

Reminiscent of the first game, the Saints nearly jumped in front in the first inning, loading the bases with just one out on an error, a hit and a walk. However, Rogalski forced Brandon Peterson to hit into a double play, bringing the inning to a close.

In total, St. Scholastica left 12 men on base, again coming up empty after loading the bases in the third inning. The Saints did manage to score two runs in the fifth on an error and a bases-loaded hit-by-pitch.

In the bottom of the first inning, Rogalski’s RBI-double, coming with runners on first and second and one out, gave the Bears an early 1-0 lead. The next batter, Bayer, flew out to center field, allowing a runner on third to score.

The Bears added another run in the second inning, taking a 3-0 lead that would last through the end of the game. Sophomore Max Gordon pitched two scoreless innings to earn the save.

On Thursday, the team will travel to Sanford, Fla. to take on Case Western Reserve University in its first game of the 2011 University Athletic Association (UAA) championships.

“Winning the UAA is something that we haven’t done in a number of years, so I think that it would be a huge pick-me-up, and it would show all the outside observers…that we really are contenders and that we’re out there to win,” Rogalski said.

Though the Bears are just 3-5 on the season and have dropped three out of the last four games, they feel that they have played a tough enough schedule to win the UAA.

“We’re extremely prepared, and we’re very excited to go down to Florida because we know that we’ve faced the best competition out of anybody going down there,” Bayer said. “We just really want to get there and put on a good showing.”