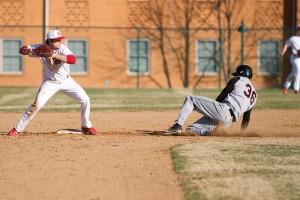 Senior second baseman Travis May turns a double play against Greenville College on Tuesday. May recorded five put-outs in the team’s 8-3 win over the Panthers.

Entering Thursday’s game against No. 5 University of Wisconsin-Whitewater, the Bear’s pitchers had held their previous four opponents to an average of 2.27 runs per game. While an 11-1 loss to the Warhawks has inflated the team earned run average to 3.76, the team is still encouraged by its first five games of the season.

“I feel like every guy I’ve brought in has done a great job pitching,” head coach Steve Duncan said. “Yeah, we’re 2-3, nobody wants to be 2-3, but our pitching is deep, and it’s good. With this kind of pitching, once the bats truly come alive, and they’re starting to come alive, it’s going to be a special team.”

The Bears stand at 2-3 after splitting a doubleheader against Westminster College on Wednesday, an 8-3 win against Greenville College on Tuesday and a 4-5 loss to Division I St. Louis University on Sunday.

“We pitched relatively well, which…sounds pretty ignorant, considering they put up 11 runs and did so pretty quickly,” Duncan said. “In my opinion, I gained confidence in [Leibman] today. He attacked their hitters; he threw strikes.”

Against Westminster, it was Wash. U.’s offense that struggled, plating just three runs in the two games combined. Senior infielder Travis May attributed the lack of offense to the Bears’ plate approach rather than the Blue Jays’ pitching.

“[Westminster’s] pitchers were pretty average. Everyone was hitting a lot of fly balls, and the weather right now is cold and the wind was blowing hard right into our faces, so we hit a lot of pop flys,” May said.

The Bears are hitting .193 on the season.

“[Wednesday] was a bad day, honestly. We expected to win both games handily and just didn’t show up with the bats,” May said.

Wash. U. lost the first game 3-1, but in the second, the Bears rode the strong pitching performance of sophomore Taylor Berman to a 2-0 win. Berman, making his first career appearance with Wash. U., threw a gem, allowing only one hit while striking out eight in seven innings for a complete game victory.

“It was nice to come out and be able to get ahead of guys and throw strikes, which was key for me,” Berman said. “Last year…was a tough year for me because I felt that I definitely should’ve gotten a shot because I felt I could already pitch at this level. [Wednesday] was just going out and trying to prove that. It was sort of a year of built up frustration and turned out pretty well.”

The Bears only plated lone runs in the first two innnings, but that was enough for Berman.

“It really was just me and [catcher and sophomore] David Madson out there…He was calling pitches, I was just throwing them and it ended up pretty well,” Berman said.

Wash. U. rallied past Greenville on Tuesday, scoring eight unanswered runs for an 8-3 win in this season’s home opener.

Senior Bryce Hrovat took the mound and allowed five hits and six walks in 4.2 innings. With help from the Bears’ defense, however, he limited the opposition to just three runs.

Ahead 3-1 with one on and one out in the third inning, Greenville was at the plate hoping to extend the lead. An RBI double turned into an out when runner David Massengill was thrown out at the plate on a relay from centerfielder Kyle Billig, a freshman, to shortstop Greg Gleicher, a sophomore, to the catcher, senior Joey Noon.

“When we’re on defense, we take pride in stealing a couple outs,” Duncan said. “There are 27 outs in a game, and if we can make them give us two or three outs, we’re shortening the game. Greenville made those mistakes, and our guys…were ready to make plays. [Those plays] probably saved that game for us.”

After throwing another Panthers’ runner out at home in the seventh inning, the Bears mounted a comeback. Back-to-back-to-back singles in the bottom of the inning, coming with one out and a runner on second, gave the Bears a 4-3 lead.

“Against Greenville, we hit pretty well, but we took advantage of a lot of errors and then just aggressive base stealing,” May said. “We really just wreaked havoc and forced them into a lot of errors.” He had two hits on Tuesday, including one in the rally.

Wash. U. would go on to score one more in the seventh, and three more in the eighth, while relief pitcher Zach Cain, a senior, held Greenville scoreless and picked up the victory.

The team will continue its current homestand with a rematch against UW-Whitewater on Friday, weather permitting. The first pitch is scheduled for noon.