Sharing the last laugh: Lizzy and Maggie Crist enjoy their final ride together

Lizzy turns to her right. Her eyes meet Maggie’s, and their hands rise in sync. Up, down and around, then left, then right. A slap connects their palms and echoes as they laugh.

The Crist sisters do their special handshake before every match. It is their recurring ritual, their very last gesture before their cleats hit the turf. Now, they are in game mode. Play ball. 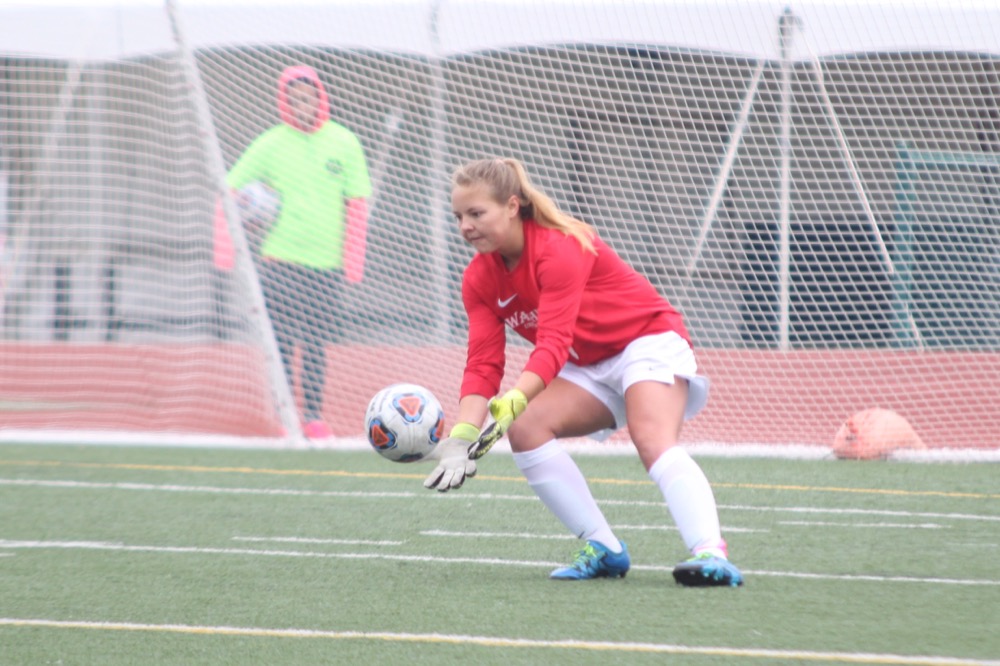 Goalkeeper Lizzy Crist blocks a shot on goal in the Bears’ game against Rochester. The Bears won this game 2-0 as Crist allowed no goals on 4 shots on goal.

Lizzy, a senior goalkeeper, and Maggie, a sophomore midfielder, are sisters on the Washington University women’s soccer team. After a childhood spent playing ball together on the fields of Wayzata, Minn. and another two years in St. Louis, this is the final season where they will slap each other’s hands before running onto the field together.

As their time together as teammates winds down, Lizzy’s goal is to savor their moments together.

“In the back of my mind, as we go day-to-day, I kind of can’t help but think, ‘Oh, this is the last time that Maggie and I will have together to go out there and run sprints or go out there and get touches,’” Lizzy said. “And those times are limited, and so I really just hope to make the most of it, and whether we win, whether we lose, whether we tie—whatever it is, I just want our relationship to stay strong.”

That relationship was built over 18 years growing up just outside the Twin Cities, playing together day and night.

“We kind of had our own little plot of land, and we would play a lot,” Lizzy said. “We did a lot of sister-sister bonding. Our parents put us in like every sport possible.”

Eventually, their main sport became soccer. Lizzy settled on soccer around eighth grade and even tried to push Maggie to be a goalie. Maggie eventually fell in love with soccer, too, but not as a goalkeeper.

“She tried to make me play goalie for like four years, and I hated it,” Maggie said with a laugh. “She was like, ‘No, it’s the best position, you’re going to love it,’ and I was like, ‘I literally hate this.’ So, I got out of that. Then, I started liking soccer more.”

Lizzy and Maggie—and their older sister Katie, a former swimmer and Wash. U. 2015 graduate —don’t have exactly the same personalities. But they learned to get along just fine due to the fun-loving nature of their relationship.

“We’re all two years apart,” Lizzy said. “I’m the middle child, so I would say that I often took the role of peacekeeper between Maggie and Katie, and just tried to make them coexist.”

“I was definitely more wild than Lizzy,” Maggie said. “She definitely tells me what to do all the time. But it was fun. We had a good dynamic because we’re not too close in age, and we’re each equally separate, so we’re equally apart. So, I don’t know, we get along really well.”

Still, they tried not to let their relationship affect their college decisions. With Lizzy already playing soccer at Wash. U., it would have been easy for her to pressure Maggie to join her. But in the end, she knew it was Maggie’s decision to make.

“I think it was kind of an independent process,” Lizzy said. “I mean, in the back of my mind, I was like ‘Go to Wash. U.! Go to Wash. U.!’ But whenever Maggie and I would talk about, you know, should she go to Wash. U., should she go to a [Division I] school—I was trying to give her the pros of what I had experienced but [to] ultimately kind of let her decide. I didn’t want her to feel like she had to come to Wash. U. just because Katie and I were there. And I don’t think [Lizzy] felt—[she] felt a little bit of pressure.”

Lizzy also could’ve pestered head coach Jim Conlon to recruit Maggie, but instead she let things play out as they would.

“I think Lizzy was helpful in our initial evaluation of Maggie, but once it came down to whether I wanted Maggie on the team or not, Lizzy let me do my job,” Conlon said.

In the end, Conlon’s presence ended up making a difference in Maggie’s final decision.

“Coach would come to my games as a sophomore in high school, which was pretty rare for him—like normally he’d just go for juniors’ or seniors’ games,” Maggie said. “So he came to my travel games, and I got really close with him and talked to him all through my [time in] high school, and then, by the time it was time to decide, I was like, ‘OK, I’ll just go to Wash. U.’”

Lizzy is happy with the way things worked out. After all, the two years she got to play with Maggie at Wash. U. are just gravy.

“In my senior year—I thought that was going to be our last time to get to play together. And then, we obviously came to Wash. U., and it was a good fit for both of us, so we got two more years out of it,” Lizzy said.

You might expect two sisters playing the same sport to be a bit competitive with each other— each trying to prove that each other was better than the other. According to Conlon, that isn’t the case with the Crist sisters at all.

They do have a friendly rivalry, though, and that pushes them to be the best they can be.

“I say we compete in the weight room,” Maggie said.

“I think it’s a healthy competitiveness though, always just pushing us to get better,” Lizzy said.

That drive to be better together, rather than to be better than the other, developed when the two sisters were young. Lizzy joked about how Maggie’s move from goalkeeper allowed the two of them to form a chemistry.

“I think it was kind of fortunate that we did very different positions on our soccer team, so, you know, while at one point Maggie was trying be goalkeeper, we usually weren’t competing for positions or anything like that,” Lizzy said. “It was actually kind of the opposite. We got to kind of work on our cooperation skills, more so than our competitive skills.”

The Crists’ sisterly love doesn’t take a break when they hit the field. In fact, even when it’s all business, they’re the first thing on each other’s mind.

“The other day…[Maggie] went down, and [Lizzy was] the first person to run over to check on her, but she wasn’t right near her…[Lizzy] had to sprint a long way,” Assistant Athletics Director of Communications Chris Mitchell said.

“She went up to get a header and got knocked in the face—she has a nice bruise on her cheek—and she kind of just pancaked on the ground, and I admit, I felt a little emotion there,” Lizzy said. “I was kind of nervous, so I sprinted over there, just to check on her, and she was kind of dry heaving on the ground. But I think all I said was, ‘You’re a rock star,’ smack on the back—I was like ‘Get up.’ It was a little tough love, but…”

“…it was definitely nice. As much as I hate to admit it, I was a little choked up,” Maggie finished.

All that time spent playing together as kids gives the Crists another leg up on the competition: mental telepathy. At least, that’s what it sounds like.

“I think there’s definitely a weird connection between us, where I can look back and just know exactly what Lizzy’s thinking, and I’m like, ‘Alright, I have to mark this person,’” Maggie said. “Even if she doesn’t say anything—I don’t know, there’s this weird connection.”

“Yeah, we can read facial expressions really well, like just nonchalant movements we can pick up on, which I think just helps with our chemistry on the field,” Lizzy said.

That chemistry goes beyond that of any two teammates. Lizzy and Maggie are so invested in each other that they feel personally responsible when something bad happens to the other.

“One time I got a handball in the box, in our first scrimmage this year, and they got a [penalty kick] on Lizzy and scored, and I just started crying on the field, and I felt so bad,” Maggie said. “That was bad.”

And, what will they miss most about playing together?

“When we finish a game… Maggie would come sprinting back to me and basically just tackle me in the air, and so, I think that is what I’ll miss—is just having that little bonding moment in celebrations,” Lizzy said.

Soon, Lizzy will no longer be a Bear, and in two more years, the final Crist sister will graduate from the Red and Green. But they’ve made a lasting impression on those around them that won’t soon be forgotten.

“Lizzy and Maggie are great,” Conlon said. “They’re great sisters—they’re great teammates, and they are just an absolute joy to be around. They just make the game fun.”