If it weren’t for a broken hand in 2011 and a nerve-wracking tryout in 2013, the Washington University men’s cross-country team would be without its most decorated runner thus far in 2015.

“I definitely did not take the usual approach,” junior Ryan Becker said. 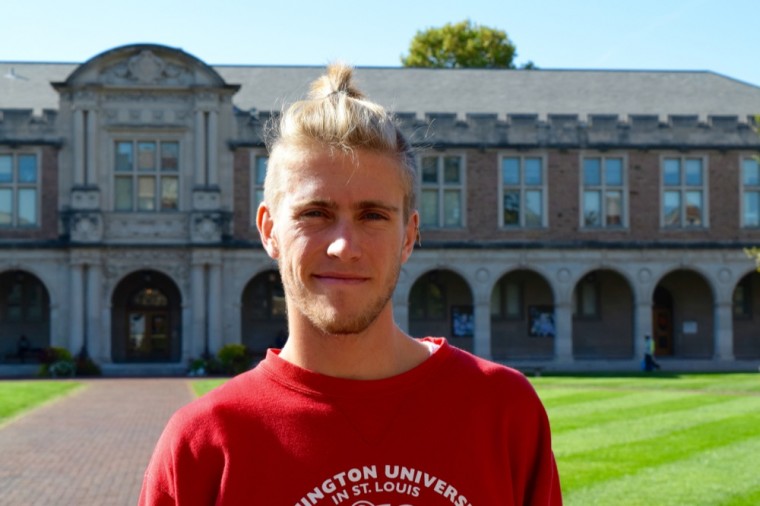 Junior Ryan Becker, a top runner for Wash. U. cross country, poses in Brookings Quadrangle. Becker began running in high school after an injury forced him to stop playing tennis.

Becker, who hails from Johnson City, Tenn., spent most of high school devoted to tennis. That is, until a combination of medical steroids and overuse caused him to break the hamate bone in his hand, temporarily forcing him out of tennis.

After the injury, Becker ran to keep himself in shape. What began as a conditioning tool eventually grew into a passion.

“I remember one day when I was just out for a run, again with a broken hand, and I did an eight-mile run, and I was like, ‘Oh my gosh, that’s so far. I bet I could push myself even further,’” Becker said. “So then that summer, I decided to run a marathon…After that, I went to cross-country camp with my school’s team.”

For many athletes, running and conditioning are necessary, but not exactly beloved, parts of a successful training regimen. Becker, on the other hand, began running before and after tennis practice, just because he liked it so much.

However, because of his late arrival to the sport, he was not actually recruited by the Wash. U. cross-country coaching staff.

If Becker wanted to join the team, he would have to walk on in a pressure-packed tryout early in his freshman year.

“The tryout was a couple weeks into the school year,” Becker said. “That was on my mind every single day, training for the tryout. That was a very nervous race, because basically I looked at it as my running career could’ve ended the day of the tryout—if I didn’t run fast enough, I wouldn’t have run here at all. It was a very nervous race for me.”

Fortunately for Becker, that tryout was enough to extend his career.

“I remember thinking that he looked a lot better than his high school times indicated when he ran the 6K time trial,” Stiles said. “He clearly was untapped.”

Becker improved significantly over his sophomore year in 2014, finishing ninth in the UAA Cross Country Championships 8K with a time of 25:34.71, then notching a career-best time of 25:06.4 to finish 73rd in the NCAA Championships later that season.

“His freshmen year, it was obvious that he could be pretty good,” Stiles said. “Then his [sophomore] year he continued to improve to our top five.”

This season, Becker has ascended to a level Stiles has called “nationally elite.” Becker won back-to-back meets, earning University Athletic Association (UAA) Athlete of the Week honors both times in recognition of these accomplishments. First, at the Gil Dodds Invitational hosted by Wheaton College on Sept. 19, he placed first in a field of 186 with a time of 25:13, beating the second-place finisher by 19. Then, at the SIUE John Flamer Invite, Becker set the course record with a 24:47.7 time, 11 seconds faster than the runner-up.

Becker credits consistency, helpful coaching and a constructive team culture for his newfound success. For one thing, a more conservative approach has helped him become a smarter runner, especially considering his lack of experience prior to joining the college ranks.

“Across the board, in high school running is very different than college,” Becker said. “You don’t know how to pace yourself in longer races, and workouts change a little bit. In high school I would always be trying to kill it on a workout, staggering to the [finish] line, but in college that’s not really how you do it. It’s more patience and smarter training and smarter racing as well.”

Most of these training and racing techniques come from Stiles, who has brought his knowledge of the sports to the Bears men’s and women’s teams.

“Especially racing, that’s a big standout that shows Stiles’ knowledge,” Becker said. “In most races, Wash. U. starts the race and most of the guys start toward the back of the race…that’s how we try to go every time. We start a little more conservative and then we pass people throughout the race.”

That calculated patience extends off the course as well.

Two weeks ago, a bout of Achilles tendinitis prevented Becker from competing in the UAA championships. Without him and junior Dillon Williams, who also did not compete due to health, the men’s team finished second overall. Had Becker competed, his average meet time this year of 24:53.9 would have earned him first place, a hair in front of senior teammate Josh Clark (24:56).

Given the late-season injury, it would be tempting for Becker to push himself in order to finish with elite times for the NCAA Midwest Region this weekend and the championships a week after that. But in the same way Becker had to learn when to push maximum effort on the course, he recognizes that the depth of the men’s team means he doesn’t have to race to his breaking point.

“Our depth is better than it has been in years past,” Becker said. “We’ll compete like we always do, and hopefully come away with a little hardware.”

Lucky for Becker and the rest of the cross-country team, Stiles reported both runners were recovering well ahead of Saturday’s regional meet.