For former Cardinal Maxvill, decades in baseball started at Wash. U.

Dal Maxvill, first on the left in the second row, is the most recent Washington University graduate to have played in the MLB. He won four World Series titles in his 14-year career, including two with the hometown St. Louis Cardinals.

The most recent of 17 Washington University baseball players to net professional contracts was Russ Chambliss in 1997, but the most distinguished alumnus of the program, and the only one to play in the majors since 1970, is unquestionably Dal Maxvill.

While Chambliss never made it out of the minor leagues, Maxvill helped his hometown St. Louis Cardinals to two World Series titles in the 1960s and regularly sidestepped into a winter sales engineering job.

That’s right—winning championships and being featured in Sports Illustrated was just a spring and summer gig for Maxvill, who earned his electrical engineering degree from Washington University and worked at Bussmann Fuse Company in the offseason.

“That was when guys had to work during the winter to make a living,” Maxvill said. “We didn’t make enough money to relax all winter and play golf. That didn’t happen, plus I had four kids.”

Of course, the Cardinals’ job took priority for the team’s longtime starting shortstop. Maxvill played 14 seasons in Major League Baseball, coached under former teammate Joe Torre with three organizations and served as the Cardinals’ general manager from 1985 to 1994. He also found himself in the thick of a labor rights struggle that would redefine the game.

“From age four or five on, I really wanted to be a professional baseball player,

obviously play for the Cardinals if I could,” Maxvill said.

But as a slender high school student, he failed to attract the attention of Major League Baseball scouts, “which really turned out to be the best thing because then I was able to go on and make my way into Washington University and play baseball there for four years and get my degree.”

At Wash. U., Maxvill played under head coach Irwin Uteritz, better known as “Irv Utz,” for whom the school’s stadium is now named. Maxvill kept his eye on the big leagues, and the Cardinals’ regional scout, George Hasser, was a regular presence at the Bears’ games. Still, there were no takers after Maxvill’s senior year in 1960.

“A year earlier, I had gone to a couple of tryout camps—one with the Washington Senators…I heard later from people that the scouts felt like or heard through the grapevine that I was more interested in pursuing my engineering background—with my degree in electrical engineering—than I was in playing professional baseball,” Maxvill said. “That was not true, of course, but there was no way for them to know that.”

Maxvill met with Uteritz, who informed him that the Cardinals were holding a tryout for local players in just a couple days. Uteritz phoned Hasser, and Maxvill attended the tryout, making it past the first day of cuts.

“I went the second day, and prior to the start of the workout, they called me over and said, ‘Hey look, we would like you to sign and go up to Winnipeg, our Class C club in the Northern League,’” Maxvill said. “They had a shortstop up there who had broken his arm the night before, and they needed somebody to go up there immediately and play. So I said, ‘Yeah, I’m all for that.’ So I signed and headed up to Winnipeg in the Northern League all in a matter of about three or four hours.”

Maxvill debuted for the big league club two years later at age 23, joining former Wash. U. teammate Charlie James, then an outfielder with the Cardinals. Maxvill played a utility role for his first World Series team in 1964, which he remembered as a squad heavy on veteran leadership. Former National League Most Valuable Player Dick Groat started ahead of him at shortstop until Maxvill took over the everyday job in 1966, the same year that Busch Memorial Stadium opened in downtown St. Louis. One season later, the Redbirds claimed the World Series crown again behind a nucleus of Bob Gibson, Tim McCarver, Mike Shannon, Lou Brock and Curt Flood.

Maxvill still follows today’s Cardinals and draws comparisons between them and his 1960s teams.

“The ballclub that we see now is pretty much similar,” Maxvill said. “They try to play good defense; they’ve got the excellent pitching—excellent young pitching, particularly. They’re not much on hitting home runs, but they’ve been timely with their hits, obviously up to the World Series. They ran into a buzz-saw in terms of some of the Boston [Red Sox] pitchers, who really did a good job shutting them down.”

He also has followed the career of player-turned-broadcaster McCarver, who retired from the booth last week after calling his record 24th World Series. McCarver and Maxvill were once roommates when they were on the Cardinals, and Maxvill said they still go out for dinner whenever McCarver is in town.

Maxvill had his best individual season in 1968, when he won a Gold Glove award and garnered enough votes to finish 20th in the National League MVP voting. Never much of a hitter—he had a lifetime batting average of .217—Maxvill also put together his best offensive numbers in ’68, hitting .253 with a .329 on-base percentage. Oddly, it was the same season that came to be known in baseball lore as the “Year of the Pitcher” because of hurlers’ collective dominance over hitters.

Future MLB Hall of Fame member Gibson befuddled batsmen with a 1.12 ERA, which to this day remains the lowest for a starter in 99 years. Gibson was so unhittable that MLB lowered the height of the pitcher’s mound from 15 inches to 10 the next season.

“Gibson kind of screwed things up there for the pitchers in ’68,” Maxvill said. “All the pitchers were hollering at him, ‘This is your fault,’ which was always kind of funny.” 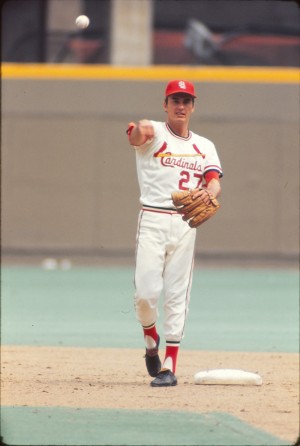 St. Louis Cardinals Archives
Maxvill still has no idea why his best performance as a hitter came in a year of such misery for his brethren.

“I wish I knew the answer to that because I would have tried to do the same all those other years when I was so weak with the bat,” he joked.

Maxvill’s offensive woes returned in the ’68 World Series, when he went hitless in 22 at-bats and the Cardinals lost in seven games to the Detroit Tigers.

The Cardinals slipped out of the playoff picture in ’69, but the team and Maxvill hardly disappeared from the headlines. In the offseason, three-time All-Star Flood famously refused a trade to the Philadelphia Phillies, setting in motion a lawsuit against MLB’s reserve clause that reached the United States Supreme Court.

The reserve clause stated that when players’ contracts expired, their rights still belonged to their current team. Essentially, owners had all the leverage in negotiations, which explained the need for Maxvill to find an offseason job. Flood lost his case in the Supreme Court, but his lawsuit set in motion progress toward modern-day free agency and markedly higher salaries.

Maxvill was the team’s representative to the MLB Players’ Association at the time. Though he supported Flood’s cause, he feared for the backlash his teammate would receive.

“I told him that I thought he was making a mistake,” Maxvill said. “It would affect him and his ability to convince a club to sign him and play him because ownership did not like people rocking the boat at that time, and he was definitely rocking the boat. But he was very strong-minded that he wanted to test the waters and see if he couldn’t bring about a change. Even though he did not bring about a change right then, he was the first major player to give it a shot.”

Sure enough, Flood has been mostly banished from the annals of baseball history for his challenge to the powerful establishment of owners, media and the commissioner’s office.

“All the players today owe Curt Flood a vote of thanks, and there’s probably a good portion of the players playing today that if you ask them who Curt Flood is, they probably wouldn’t have any idea, which is sad,” Maxvill said. “But that’s another story.”

Despite serving as the team’s union representative, Maxvill said that his relations with ownership did not fray, which would become important later. He played 2 1/2 more seasons in St. Louis before being traded to the Oakland Athletics in 1972. He retired in 1975 after stints in Oakland and with the Pittsburgh Pirates.

After Maxvill’s playing days ended, so did his relationship with Bussmann Fuse. However, he got back into baseball with a job on Joe Torre’s New York Mets coaching staff. He then returned to St. Louis to coach under manager Ken Boyer before reuniting with Torre on the Atlanta Braves’ staff.

In 1985, Cardinals’ owner August “Gussie” Busch, along with two front office executives who were both Wash. U. alumni, hired Maxvill as the team’s general manager.

St. Louis lost seven-game World Series in ’85 and ’87, and Torre was his manager from 1990 to 1994. After failing to qualify for the playoffs in six straight seasons before the strike-shortened season of ’94, the last year of Anheuser-Busch ownership, Maxvill was relieved of his duties. The Cardinals also fired Torre midway through the next season, and while Torre found his footing with the Yankees, Maxvill has remained retired since.

He resides in Chesterfield, Mo., but spends much of his time in Florida, and he has not set foot on the Wash. U. campus in two to three years.

“I’ve got a wife, four kids, seven grandkids and three great-grandkids that occupy 99.9 percent of my time,” Maxvill said, “and it’s kind of tough to get involved in anything else.”