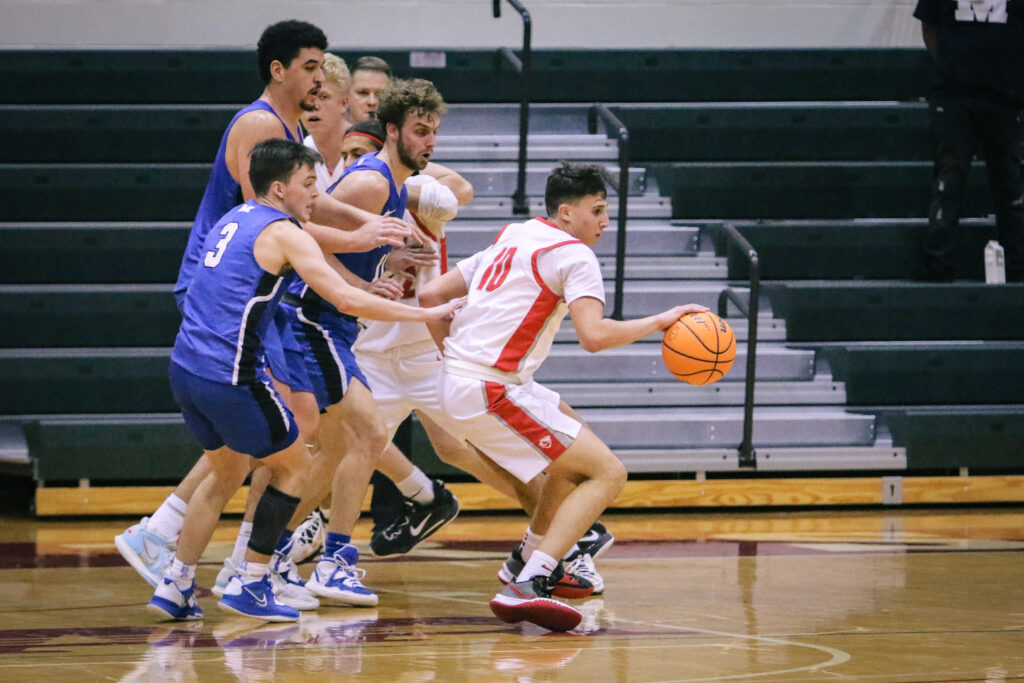 Conference play in the UAA has always been hard. The schools are geographically spread out, meaning long bus commutes in between games on Friday and Sunday. The games are high-stakes matchups against long-standing rivals like the University of Chicago, a school that the Bears first played in 1961. The schedule has the unique facet of playing opponents twice in a short timeframe to even out any home-court advantage.

The fast start was fueled by the play of senior Charlie Jacob and sophomore Drake Kindsvater, who are both averaging just under 14 points per game. Kindsvater went 7-8 at the line in the team’s first conference game against the University of Chicago, and he’s also proved to be a defensive threat, with 27 steals. On their home court, the Bears outscored opponents by a combined 29 points over the three games.

But that momentum changed as they hit the road, dropping the next two games against Case Western Reserve University and Carnegie Mellon, where they lost by fifteen and thirteen points respectively. Prior to this weekend, the team had never lost by more than three.

The team struggled defensively in their Friday game scoring five points off turnovers to CWRU’s 24. They fought back from a twenty-eight point deficit in the second half to narrow the final margin. And while they held the lead for four short minutes in the next game against Carnegie in the first half, not even a second-half scoring streak led by freshman Yogi Oliff could put them in the win column.

The Bears will see both these teams again on their home court as they approach the midway point in conference play. Important stats show that the Bears are a true contender this year — as a team, they are shooting 41.3% from three-point range, led by Jacob who is shooting 50% from deep on 58 attempts. The Bears also commit only 13.3 fouls per game, good for the lowest mark in the UAA.

Individually, Kindsvater and freshman Yogi Oliff are each averaging 1.8 steals per game, tied for the top mark in the UAA. Kindsvater is also shooting 60.6% from the field, which is fourth best in the conference.

Overall, the Bears hold a 12-4 record, with nine conference games still remaining. They travel for one more weekend before returning home on Friday, Feb. 3 to play the University of Rochester. Their conference record puts them in a four-way tie for second as they pursue a Pool A Bid to the NCAA tournament; if they win the conference, they will be granted an automatic bid. If not, they will be subject to the selection committee’s delegation of at-large bids for postseason play.