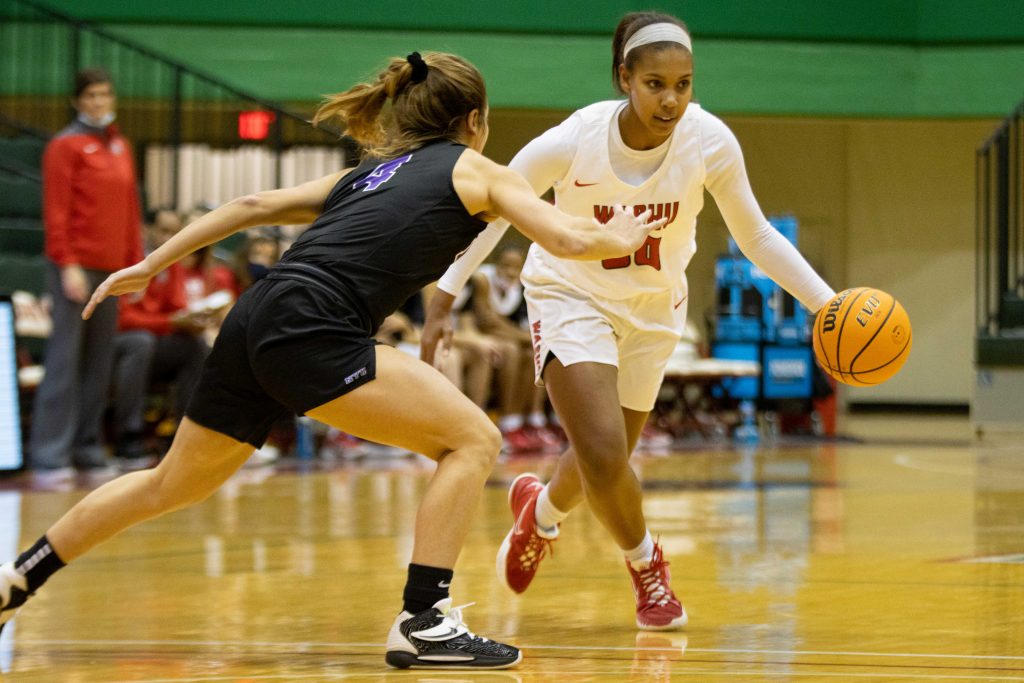 One afternoon before the Washington University women’s basketball team stepped on the court for practice, head coach Randi Henderson handed each team member a piece of paper. On it were a collection of statistics — shot quality, turnovers, and defensive deflections from a previous scrimmage.

Shots were graded by quality, on a nine-point scale. “A nine is an uncontested layup,” senior post player Maya Arnott explained. “A five is where I’m off balance, and there’s a 50-50 chance of it going in.”

Henderson believes that the statistics can determine the winner of any game — and that turnover percentage, offensive rebounds, free throw percentage, and shot selection can be all honed by grit and practice.

“If you win, I think three out of four of those [stats], you have like a 90% chance of winning [the game],” Henderson said.

And after finishing second in their conference, the UAA, in a four-way-tie last season, the team is determined to come out on top this year, one made free-throw at a time.

A team of returners

Last year, Samantha Weaver was the only senior on the roster. Though she (and her 9.7 points per game) will be missed, the group of returners she left behind remains largely intact, with a majority of players as upperclassmen.

Unlike the 2021 season, however, this fall’s returning players have a key advantage: at least one full season under their belts.

“My class was the COVID class,” she said. “So last year was like our freshman year, our first real year playing.”

Henderson said that restrictions from COVID last season meant her players had either never played a collegiate game before, or had a full-year break from typical training. An unmasked, unrestricted preseason means that the team will be fired up and stronger than ever.

“I’d definitely say that we’re in a much better place this preseason [and] this season than we were at the start of last one,” Walker said.

The team has three new players on the roster — freshmen Jordan Rich, Olivia Muse, and Nailah McBeth. The three put their roster count at a 14, with nearly 80% veterans. Joining the list of new faces is Assistant Coach Tyler Amsberry, who was hired in July. “He has good constructive criticism on the court,” Walker said of Amsberry. “And is a big behind-the-scenes guy.”

Two of the team’s top scorers from the 2021-22 season are back for more time with their teammates. Arnott led the team in points from the post position, averaging 13 points for 23 games. “I anticipate her having a good season for us,” Henderson said. “She does work extremely hard.”

This year, Arnott is focusing her energy on putting up points when it matters.

“Last year we struggled with finishing games,” she said. “There are a lot of games that were pretty close, and we could have won but we didn’t. And I hope that this year can help in leading us to finish those tight [ones].”

Sophomore Jessica Brooks was the second-leading scorer her freshman season, but rarely actually scored her ending average of 10.4 points per game. Brooks scored a whopping 32 points in a January game against the University of Chicago, but only put up a singular point against Case Western Reserve University in February.

“[Brooks] had some really big games for us,” Henderson said. “She struggled a little bit with consistency, so I see her stepping up into a more consistent role this year.”

Alongside Brooks and Arnott, Henderson has confidence in the other 12 members of her team. She rattled off a handful of key starters last year — seniors Molly Gannon and Karisa Grandison as dependable point guards, senior Naomi Jackson (coming off a knee injury) as a crucial shot, and senior Sammi Matoush as an all-around utility player.

And despite having three fewer players than the men’s team, Henderson isn’t worried about scrambling for fresh legs. “I think we have a very deep bench,” she said. “We have very capable players on our team, even though our roster might be small.”

Though their record last year (14-11) was decently above 500, the team is on the hunt for more wins this season, especially during their conference tournament.

Hovering above the UAA three-way tie last year was NYU. Last year, the Bears lost both games against them, and they will face the former champions twice: first on Jan. 15, and again on Feb. 12.

Arnott, for one, is optimistic about their chances. “I think yet we’ve grown a lot from last year, just making better game-time decisions and being better about our shot selection,” she said. “Hopefully we can beat them.”

Since the UAA last year was so tight, Henderson couldn’t pick out any one matchup that will be particularly challenging — because all of them will be.

“Nobody is past being beaten by anyone in our league, and literally every game is critical,” Henderson said.

Walker also agreed that since the team is working towards “mini-goals,” each offensive rebound and hard-fought point will be a victory in itself. She’s excited for the season to come, and for what she thinks her team can deliver.

“We have a very special team. People are just going to have to come to the games and find out,” she said. “It’s definitely going to be worth it.”

For their first game of the season, the Bears will face Dubuque at home in a non-conference matchup on Nov. 13.