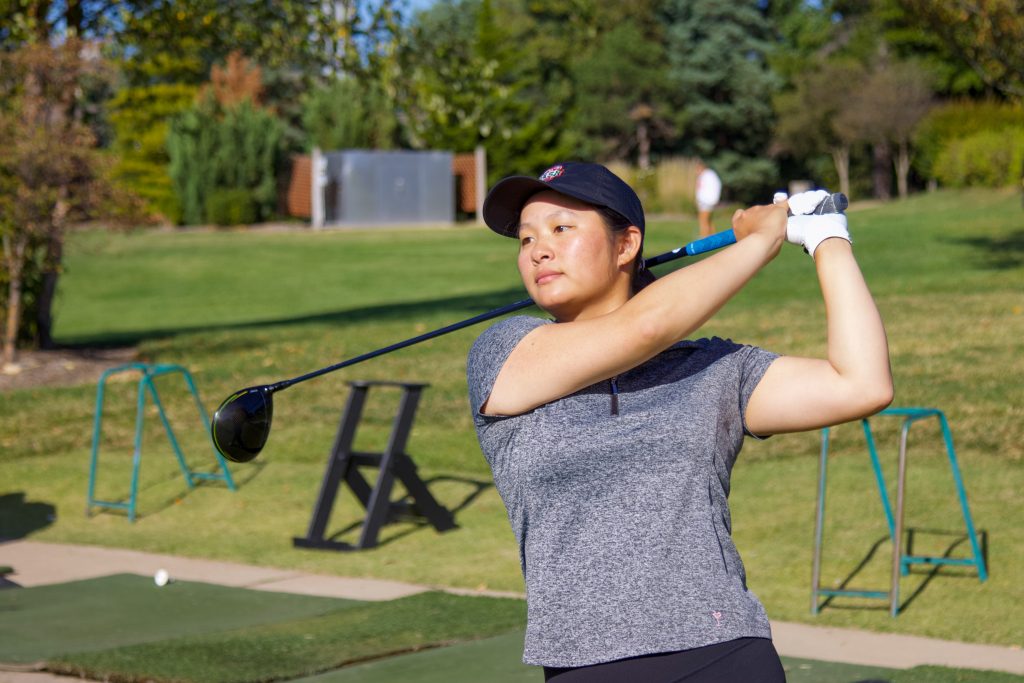 Sydney Kuo is a sophomore player on the Washington University golf team. Off to a stellar start, Sydney is on her A game and plans to further her streak of top finishes through the season. She’s also a student at the Olin Business School and intends to major in Organization and Strategic Management. Between practices and study sessions, Sydney took the time to sit down with Student Life to have a conversation about her recent accomplishments, her recent goals, and how golf fits into her life.

Student Life: In your words, how is your season going so far?

Sydney Kuo: My season is going pretty good. Definitely after having freshman year to adjust from high school and being out of school, I think I’ve gotten a pretty good grasp on how to manage my time — balancing social life and academics — while also playing a varsity sport. I’m really able to capitalize on this as I’ve honed in on my skills and practice in general, which I think is reflective of my success in these past few tournaments.

SL: Can you talk to me about your recent accomplishments — namely, the Montgomery Women’s Intercollegiate and the Fall Preview?

SK: Yes. I think that, coming into this year, I definitely had a lot of aspirations for how I wanted to compete — specifically for how I wanted to shape up against other players. Last year, I came into golf with no expectations, just to play and see what happened. After finishing pretty well last year, it pushed me to set higher goals for myself. I believe I finished eighth individually [in Division 3] last year, and I’m just someone who, if I’m going to be good at something, I’m going to master it. In this case, I want to be the top golfer in D3. So, over the summer, I was telling myself that [I was] going to prepare and going to do the best I could to try and achieve that goal. I think that I’ve done a pretty good job so far, taking that mindset with me when I go into competition. It pushes me to do well, and I think that, with all the practice that I’ve done, it has definitely translated well to my finishes.

SL: Can you walk us through your mental process of when you play golf?

SK: It definitely varies from person to person, and I think any serious golf player will tell you that. It takes so much mental power and mental toughness to be able to play good golf. It’s just so infuriating; like, you can go from zero to a hundred in one second because, when it comes to golf, that’s just the way the game works. So, when I go into a tournament, I tell myself that golf is imperfect and that I am not going to be able to have a perfect round every single time. But what you can do is just prepare yourself the best by practicing more. What I like to do, personally, is just try to go into it with a clear head and trust myself. I trust that the practice, the time, and effort that I’ve put in is going to carry me over into the tournament — and that it will do the work for me. Also, even though I have high goals for myself, I try to go into each tournament as its own thing and really take it one shot at a time. The main thing is to stay in the present, keep my mind clear, and just focus on the now.

SL: What would you say is a winning attitude?

SL: Can you speak to what your main goals are for this season?

SK: I would like to be the number one player in Division III golf, which is a pretty high goal. As for the team, I would love for our team to be in the Top 3 in DIII. We finished ninth as a team last year, but we’ve had such good finishes in the last three tournaments. I would say [one other goal] that I have is to perfect my time management. I think that the amount of time and effort we have to spend — not only at practice, but at balancing academics and a social life — is so understated, especially for student athletes.

SL: How do you face adversity?

SK: The NCAA tournament was a particularly rough tournament for me in terms of golf. If you look at my scores, there was one day where I shot a 79, and it was a very somber moment for me. I think [that] what’s really important [for coming back] from failure is to try not to get so down on yourself and [to not dwell] on it too long. So, even if you are upset with yourself, don’t let those bad thoughts continue. You can’t go back in time and change anything, but what you can do now is to make sure that you don’t do that again, or [that you] do even better the next time you go out there. That’s kind of how I went into the round after that. The day that I shot that 79 was the third day. Afterwards, I was kind of in my hotel room telling myself, “Wow, I can’t believe that just happened. Okay, what am I going to do tomorrow to make sure that it doesn’t happen again?” [The round after], I didn’t do amazing, but I shot a much better score. I think it’s just about trying to stay positive because if you just get into that headspace, it destroys you. By doing that, you’re essentially reinforcing negative energy, and that’s not conducive to performing well.

SL: And a question that we ask all of our athlete-of-the-week participants: Would you rather have fish for hands or adopt a child every time you hear Bohemian Rhapsody?