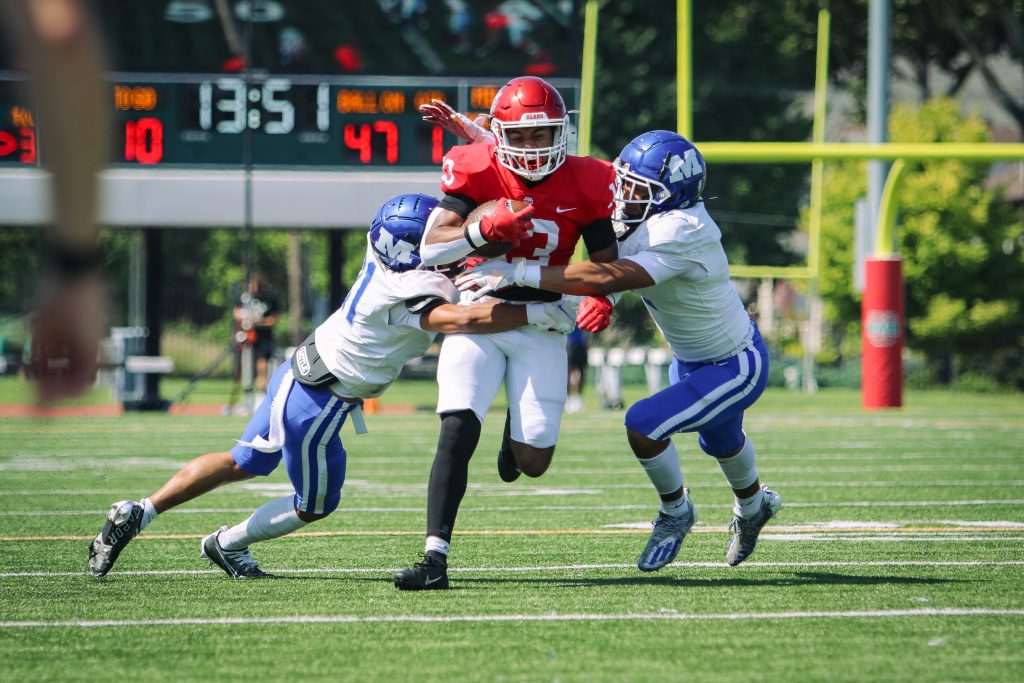 In the second quarter, Matt Rush sent a spiraling pass to receiver Collin Goldberg, and the ball was a bullet into the endzone. It wasn’t the game winning pass or the most climactic moment of the game — in two games, the Bears haven’t played with a deficit — but Rush looked like he had all the time in the world as he sent a ball flying to Goldberg.

“I just have a ton of confidence [in his recievers]; Goldberg makes plays like that routinely,” Rush said. “When I threw it, I knew that he would track it down. That’s just what he does.”

That nonchalance — making over-the-shoulder sprinting catches routine — propelled the Bears to a 47 point win against Millikin in the team’s first conference matchup. They’ve outscored opponents 106-14 in the best season opener since 1997, when the Bears went 141 – 7 in their first two games.

‘I think we played really well to start the game, just like we did the week before,” head coach Aaron Keen said. He said that the challenge comes when he rotated players throughout the game as the opponent brought pressure in the second half. “We still need to get better in some areas: we turn the ball over a little bit too much for my taste, so we can clean those things up.”

After not scoring during the first drive, a pick 6 allowed Sam Mattecheck to sprint up the field for the first touchdown to jubilant cheers from the bench.

DB Sam Mattecheck sprints up the field for the first touchdown of his career. (Photo by Clara Richards)

Rush was challenged all game, with Big Blue’s defensive line forcing him outside of the pocket. Despite the pressure, he executed 18 out of 26 passes. “Matt does a tremendous job of putting the ball on [our receivers’] hands,” Keen said. “You’ve got to make the tough catches when the defenders get a hand on the ball. And we’re doing that in spots. But we can continue to get better.”

Goldberg, who totaled 4 touchdowns in 10 games played in 2021, made two over-the-shoulder catches for two touchdowns in Saturday’s game alone.

Kenneth Hamilton also landed two touchdowns with short runs. Sophomores were responsible for five out of the seven touchdowns, showing the potential in the underclassmen.

And even with senior all-conference player Alex Vogel out of the game with an injury from the season opener, the defense didn’t falter. They are currently ranked seventh in Division III in total defense, thirteenth in scoring defense. Senior Matthew Schmal led the group with four solo tackles.

Despite the uncertainty from only returning two starters on the d-line, Rush hasn’t been surprised by their strength. “I definitely saw it coming. I was practicing against them all summer, and life wasn’t too fun going against them daily. So I definitely expected that.”

The Bears play their first road game next week, facing off against Carthage in Kenosha, Wisconsin on the 24th. WashU won 37-16 in 2021, and the Bears have won three games straight against the Firebirds. The weekend will pose a challenge, with tough competition and the Bears not able to bring their entire roster on the travel trip.

“It’ll be the first opportunity we’ve had to play a game where we don’t have our entire family there with us, if you will,” Keen said. “We’ve got to be able to adjust to that and play our best football in some unhappy confines.”