Men’s soccer scored four goals in the first half of their matchup against Greenville University.  They took 22 shots, 12 on goal. After the final huddle, as the Greenville players walked off the field, WashU’s athletes started running. They sprinted back and forth from the goal line to the halfway line, the bright overhead lights illuminating the otherwise dark field.

Fitness has been one of the team’s goals. Ahead of competitive matchups like against Millikin, they felt the need to add in a few more minutes of conditioning, even in a shutout win. “We just have to keep moving forward and try to be better, regardless of what the result is,” goalkeeper Matt Martin explained.

In a dominating display of fashion, the WashU men’s soccer team ran riot against Greenville on Wednesday night to collect their first win of the season, with a score of 4-0 that improved their record to 1-1.

The win was the Bears’ first of the season after losing their opening game against Carthage College last week. The game ended with the Bears down 1-2, and coming into Wednesday night, several members of the men’s team went into the game with the mindset of turning things back.

“We came out in our home opener knowing we had to win,” said junior Owen Culver. “We had a disappointing result last week, so we came out [all] fired up. We knew we wanted to make a statement, and I think we did.”

The Bears not only outscored the Panthers 4-0, they also edged them in key areas of the game. For a team that is normally comfortable relying on their defense and being selective about its shots, they outshot Greenville 22-7. 83% of those shots were on goal.

“We were guns blazing,” said fifth-year goalkeeper Matt Martin. “We felt like there were times where we would go up the field and there was no chance that they could even come close to touching the ball. It was incredible to see.”

Freshman Ethan Semelsberger opened the scoreline with a beautiful header to find the net in the fifth minute, thanks to a corner kick from Culver.

But 10 minutes later, another freshman decided to put his name on the scoreboard when a well-placed ball from Culver found the feet of Ryan An. Culver finished the night with two assists and one goal. 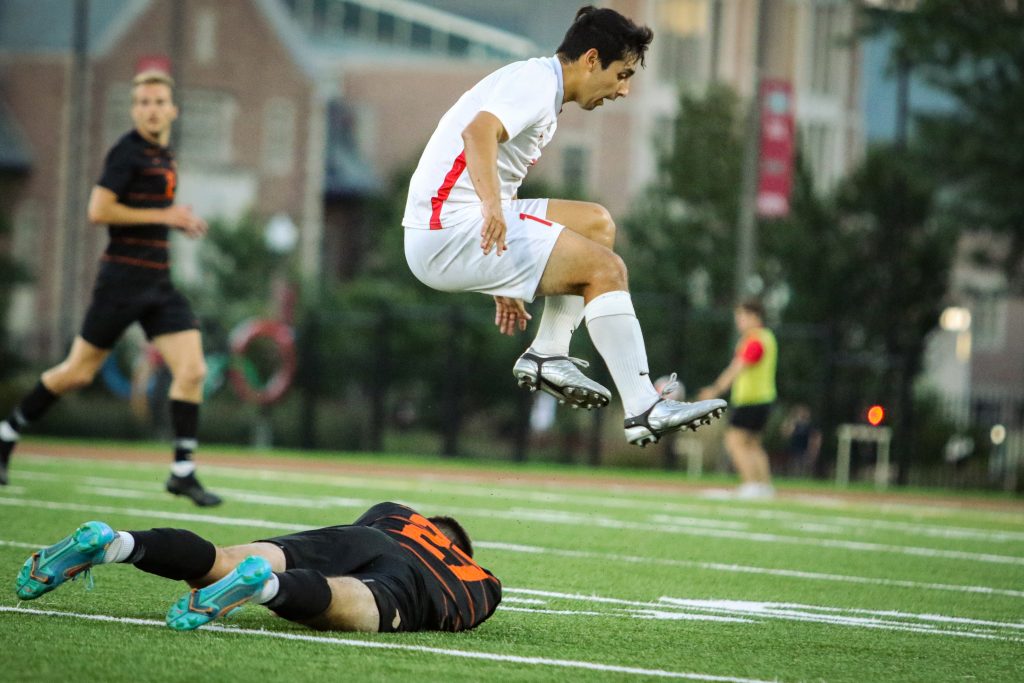 Some acrobatics in the midfield: Armando Sanchez-Conde hurdles a defender. (Photo by Clara Richards | Student Life)

“It’s never enough,” said Culver after the game. “I feel like I could have scored a couple more, but, you know, we’ll save that for next week.”

Having missed the season opener against Carthage, fifth-year goalkeeper Matt Martin was a major contributor to the team’s defensive presence. He made five saves out of the seven Greenville shots, and was involved in organizing his defense throughout the entire game.

“Martin was a wall when he needed to be,” said head coach Joe Clarke.

And it was not just Martin: the entire team did its job defensively when it needed to. The team made sure that Martin was properly supported throughout the game. Most notably, in the second half — on the cusp of conceding their first goal of the night, with Greenville players staring right at the goal — three WashU defenders acted as goalkeepers to stop the ball from hitting the net.

Seeing his teammates support him in goal “meant everything,” said Martin. “It shows that our team’s there to watch everyone else’s back. Like, we’re really in it for the team.”

While the freshmen were key to the defensive engine of this team, the veterans in the group also anchored the win.“We’re taking on a lot more of a leadership role this year,” said junior Reece Nicholson. “Last year, the seniors were great for us. They had such great chemistry that brought everyone in and made us feel super comfortable. So, we’re trying to kind of repeat that with the freshmen coming in [by] giving them confidence.”

Owen Culver is aggressive in the midfield against Greenville. (Photo by Clara Richards | Student Life)