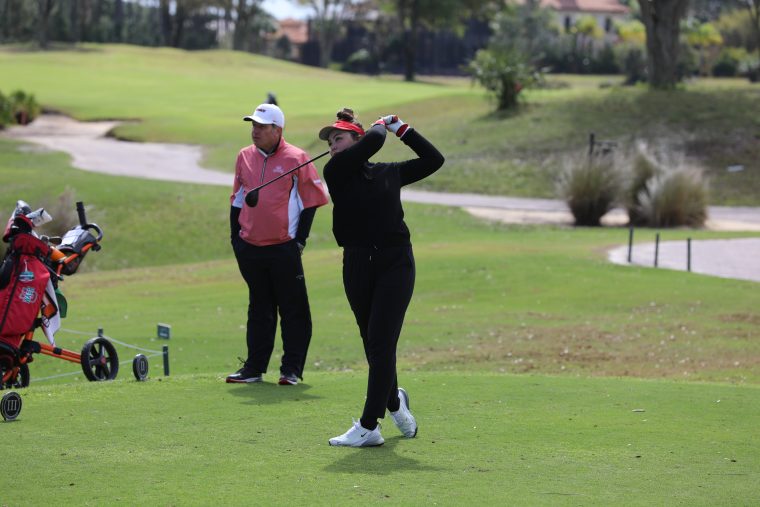 WashU finished third in the UAA Championships during a two-day competition in Florida; Krystina Wilson finishes her swing watched on by interim head coach Dave Reinhardt. (Photo by the Athletic Department)

The WashU Women’s Golf team, led by interim head coach Dave Reinhardt, has concluded their spring regular season play after five spring tournaments against nationally ranked competition. Currently ranked 11th in the country, the underclassman-heavy team has had many strong performances as their season has progressed. With junior Annie Mascot and freshman Sydney Kuo having standout performances for the Bears, the team earned two second-place finishes at the WashU Invite and IWU Spring Fling before taking the title at the UW-Whitewater Spring Fling in the final competition fo the season.

At the WashU Invite, Mascot and sophomore Krystina Wilson finished in the top five overall with two-day scores of 146 and 150. Not far behind was freshman Paige Warren with a 151, freshman McKensey Kaseta with a 153, and junior Emmy Sammons with a 155. Overall, the Bears finished with a team score of 608, just eight strokes behind first-place Illinois Wesleyan.

Reinhardt spoke highly of the team’s second-place finish; he noted that he was pleased with the current team chemistry and effort that his players have been competing with. “Each day, we go out to compete for championships and to play hard,” Reinhardt said about the team’s current mindset. “These young ladies embody the definition of true scholar champions, and I am excited for what the future holds.”

The IWU Spring Fling brought the Bears to Ironwood Golf Course in Normal, Illinois. The Bears competed against Denison, St. Catherine, DePauw and the University of Wisconsin-Whitewater. The Bears ended up placing second in another contested battle with Illinois Wesleyan with a score of 626-621. Kuo and Mascot finished in second and fifth respectively, and Kaseta came in seventh overall with a score of 158. Wilson finished with a score of 160, Gwynnie Lee shot a 161, Sammons tied for 20th overall with a 163 and Warren scored a 164 to round out the team’s performance.

The Bears finished the season with a win at UW-Whitewater Spring Fling 18 strokes ahead of their opponents in a field of sixteen competitors. Wilson took the individual win, with teammates Kuo and Mascot closely behind in second place.

The team’s 8-player roster includes junior captains Mascot and Sammons, three sophomores and three freshmen. Mascot, the 2019 Freshman and Player of the Year, is currently ranked 13th individually in the country. The freshman class, recruited by Swanson, has also made an immediate impact; Kuo is currently ranked 5th in the country and came to WashU after taking a gap year.  Over the course of her year of absence, Kuo stayed connected with the team and had weekly check-ins with former head coach Swanson, and over the summer she won the New Jersey State Golf Association Women’s Public Links Championship.

Reinhardt, who previously filled the position of assistant coach under Swanson, has stepped up into the position of interim head coach and had a popular reception from the players. “We all love having Dave as a coach,” Mascot said. The Athletic Department has not externally announced a permanent replacement for Swanson, and Director of Athletics Anthony Azama said that the department is in the process of filling the role. “Coach [Reinhardt] has a good opportunity because he’s been able to show what he can do, but he was fully aware that we’ll have a national search,” Azama said.

The Bears will hope that their dominating performance at the end of the year will put them in contention for a bid to the NCAA National Championships. The selection announcement will be published on Monday, May 2, and the competition will take place on May 10-13, 2022.